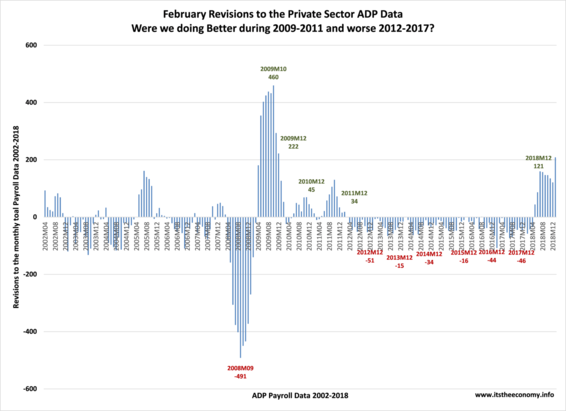 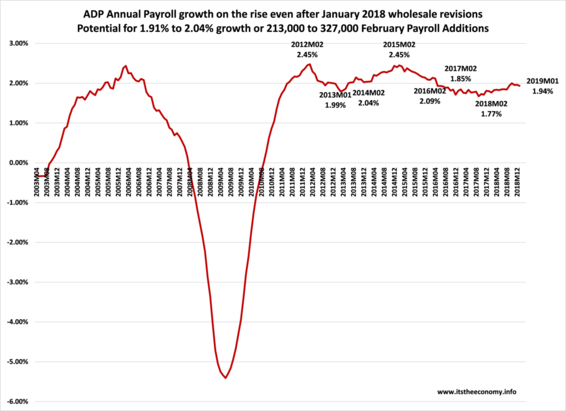 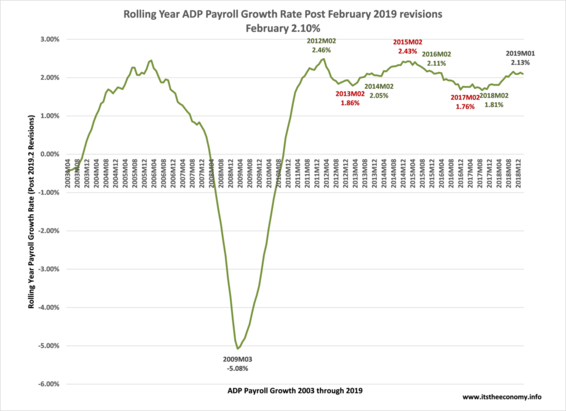 The 2018 data was revised higher, so was January, "reducing" February Data

The ADP Payroll report is released the Wednesday prior to the monthly government Employment Situation Report. The headline ADP number is the seasonally adjusted payroll gains or losses. The headline Employment Situation number is the Non-Farm Payroll (NFP) number. The NFP data includes both private sector workers and government workers. This causes a difference to happen between the two headline numbers.  What was reported in  the ADP Payroll Report for February 2019?

The ADP forecast article was expecting good things this month.  Revisions to the data from prior years, plural.   Rolling Year growth was expected to break through the 2.00% growth level.The largest growth, February to February, should be in Natural Resources (NR,) Construction, Professional Business Services (PBS,) Education and Health Services (EHS,) and Leisure and Hospitality (LAH.) Month to month growth was anticipated in all sectors, seasonally adjusted. The largest growth rates were expected to seen in NR, Construction, PBS, Manufacturing, and Information (IT.) It was projected that we would see 213,000 to 260,000 payroll positions added during February, before revisions of roughly 30,000 workers, bringing the number down to 183,000 to 230,000 or roughly 213,000 private sector workers.

Did we have a worse recession and a better recovery than first reported? Supposedly there were half a million fewer seasonally adjusted payroll positions during September 2008 than last reported. Supposedly there were 222,000 more workers at the end of 2009 than last reported. Supposedly every year from 2013 through 2017 we had fewer workers than we thought. Last year was even better than originally reported just two months ago. We had 125,000 more workers than reported last month.

We saw February to February growth in all sectors. The largest growth rates were in Natural Resources, Construction, PBS, LAH, and EHS. The order is slightly different than projected because LAH and EHS were tied with the growth rate projections.

Are we growing faster or slower than January Month to Month?  Supposedly the month to month (MTM) growth rate during January was 0.17%, now it is 0.23%. This month the MTM is 0.14%. This would be the "weakest" February growth rate if you did not factor in the huge revisions to the prior data.

We saw January to February Growth in all sectors. The largest month to month growth rates were in Natural Resources, Construction, IT, Financial Services, and PBS. The order was a little different and Financial Activities replace manufacturing for one of the top five growth rates.

Net-Net, we saw an increase in ADP Payroll positions of 391,000 workers from the value reported last month. The upward revision to the 2018 data of 122,000 payroll positions and the upward revisions of the January data of 87,000 means that this month's 183,000 could have been reported 209,000 positions higher than it was reported (rounding makes the difference between 391,000 and 392,000.) All sectors grew month to month. 2018 was better than originally reported.