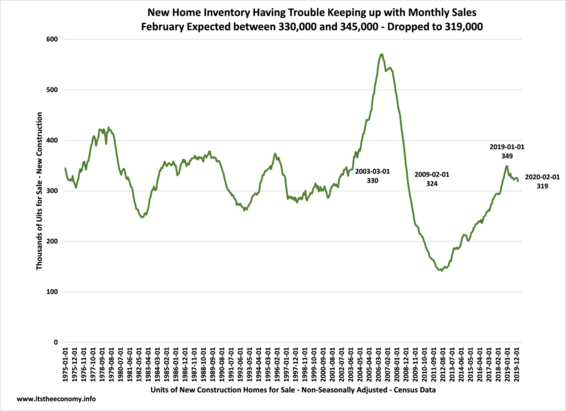 Good News Was Projected for February - March May be similarly good

The Legacy Media is hyper-focused on the Wuhan Virus to the detriment of paying attention to the economic news that has been released recently. The Construction sector is mobilizing, as was referenced in the February Jobs Report and the December JOLTS Report Unemployment claims are down, at least until Thursday, jobs and wages are up, at least until the April Jobs Report. Full-time jobs were rising. More people are qualifying for mortgages. The Wuhan Virus Mania started well into March.We had strong January and February New Construction data. We had strong January and February Existing Home Sales data. We had strong January New Home Sales data. This trend was expected to be maintained into February and March for New Home Sales.

Inventory for new home sales peaked Last January at 349,000 units. This month the inventory level dipped from 325,000 units during January to 319,000 units this February. Last February we had 340,000 units. According to the February New Home Sales report this leaves us with a 4.7 month supply of new homes.

All real estate is local. Home prices vary on the state, county, city, and subdivision in which you live. They vary based on square footage, amenities, and condition. Some are overpriced. Some are "under-priced." Some are priced just right. Some buyers are over-motivated and will pay a higher price for a home than someone else. Some sellers are "under-motivated" and will "wait for their" price, only to have to drop their price every month until a motivated buyer meets the very motivated seller. Contact you local REALTOR or some builders to find out what is available. Contact a lender to be pre-approved for a mortgage.

The Legacy Media is saying that we should ignore the February and March data because it is BC, before Coronavirus. Hogwash. This tells us where we can return after the Wuhan Coronavirus situation has cleared. Prognosticators are changing their tunes almost as if they are on "shuffle." First quarter was almost completely in the books prior to the "shutdown." Second Quarter has not even started. There are some projecting a steeper economic drop than we saw during 2009 and 2010. This may be a one quarter drop. Some in the "fortuneselling" business are now saying that GDP could drop 24% during q2 and rebound by 23% during Q3, quarter to quarter.

It's cold and flu season. It is also that time of year when new homes and for sale signs pop up  like daffodils. The Stock Market is not the Economy. We can expect stronger data for a while, possibly into March. April will be wait and see. If the Wuhan Flue dissipates, if the stay home and don't do anything orders are lifted, then we could see a rapid recovery. 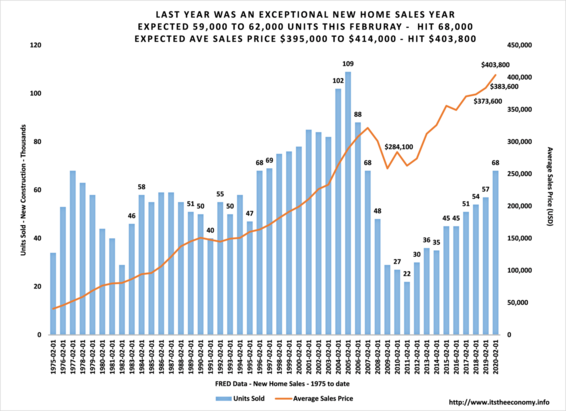 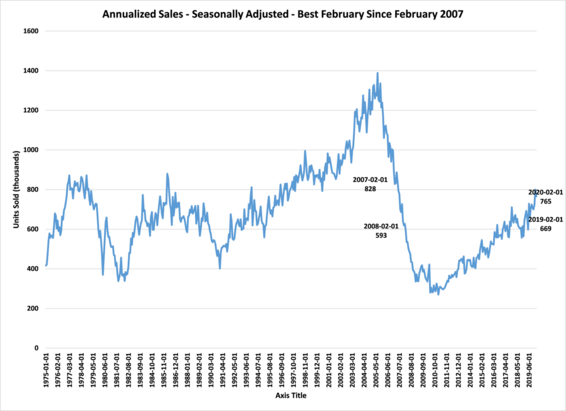