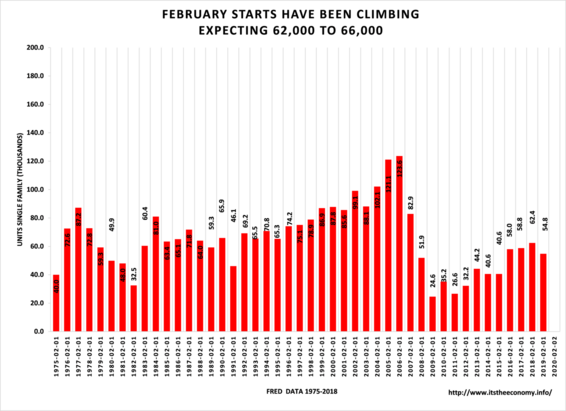 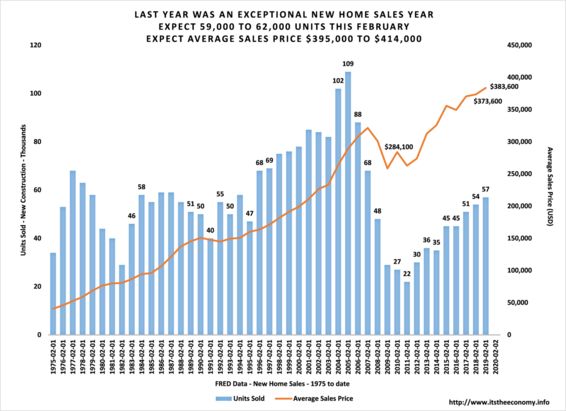 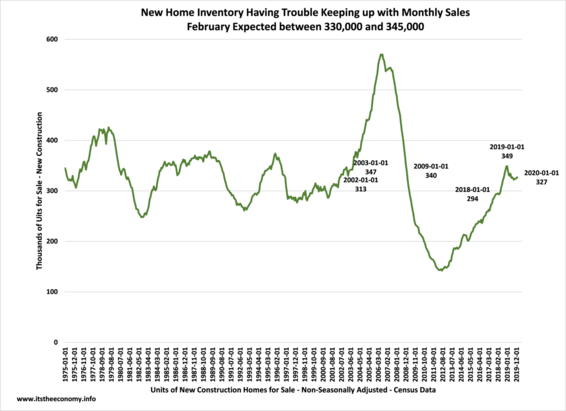 The Legacy Media is hyper-focused on the Wuhan Virus to the detriment of paying attention to the economic news that has been released recently. The Construction sector is mobilizing, as was referenced in the February Jobs Report and the December JOLTS Report (The January report will be released March 17th.) Unemployment claims are down, jobs and wages are up. Full-time jobs are rising. More people are qualifying for mortgages. The Wuhan Virus Mania started well into March. We should continue receiving solid data.What can we expect from the February New Construction report (March 18,) the February New Home Sales Report (March 24,) and the February Existing Home Sales Report (March 20?)

The New Home Starts Data should continue to grow from the January Level and the February 2019 level. Last February we were still working through the Government Shutdown. This year we are coming off a strong January for new home starts.  Starts tend to rise annually and from January to February. Las year we only had 54,8000 February starts. Last month we had 68,600. The February to February  data indicates that we should see 56k-59k starts. The month to month data indicates 71k-78k starts. We had just over 62k starts February 2018. Expect something between 62,000 and 66,000 units. Starts normally rise month over month through May, non-seasonally adjusted.

New Home Inventory is expected to rise month to month. It is hard to believe that the spike in inventory will meet the "normal" inventory growth February to February. The month to month data indicates that inventory could grow up to 2%. We only had 327,000 units available last month. Last February we had 340,000 units for sale. If we grow 2% month to month that only gets us to 333,000 units. While we normally grow 10% or more February to February, that pace should be slowing as the growth of units under construction has slowed. Expect a number between 330,000 and 345,000 units for sale.

All of this data is good data. The mainstream media tends to obsess over the seasonally adjusted annualized (SAAR) data, whether it is new home construction or new home sales. The seasonal factors change category by category, month to month, and year to year. We have seen the SAAR of starts and completions surprise to the upside during the past few months. The increases expected from last February's values mean that we should see the SAARs increase for starts, completions, and sales. It is difficult to forecast these changes without access to the seasonal factors. The good news is that the Legacy Media will be scratching their heads as the SAARs for Starts rises through April and the SAAR for Completions generally rises through August, with the SAAR for Sales probably peaking during July.

What can we expect from the Existing Home Sales Data for February? Inventory should improve month over month for the existing homes market. It may be difficult for inventory to rise February to February. Inventory is expected to rise 3% to 4% month to month. It is possible that inventory will drop 1% or increase 3% from last February's level. The month to month data indicates a level between 1.46 and 1.474 million units units. The annual data indicates a range of 1.617 to 1.683 million. We will be lucky if we reach 1.500 million units. Inventory has been, in general, in year over year decline since 2015. The good news is that we normally see inventory rise through May, June, and sometimes July. Expect a number under 1.48 million units.

We should see the most February Sales since February 2007. Last February we were still dealing with the Government Shutdown. The loan approval process seems to have been restricted. We saw a shift in the sales year. Peak sales did not hit during June. May and July were the strongest months last year. We should see more units sold this year than last year and we may see more units sold than during February 2018. Sales are expected to fall between 311,000 and 319,000 based on month to month growth. Sales are expected between 330,000 and 349,000 based on February to February growth rates. A number of 320,000 is well within reason. We could hit 325,000 units due to pent up demand. A number close to 330,000 would give confidence to those in the Legacy Media - even if they will say that this is backwards looking data.

We have had pent up demand for existing homes since the recession. The problem was that average sales prices remained below their historic levels for a protracted period of time. It wasn't really until 2017 that the average sales price exceeded the pre-recession average sales price levels of most months. People are now hearing about how average sales prices are increasing. We have seen elevated levels of loan applications recently. They are also hearing about record low mortgage rates. The two situations combined should spur more people to want to move from one house, or condominium, to another house or condominium. They may even want to build a new home. New crops of homes are springing up in farm fields around the country.

All real estate is local. Home prices vary on the sate, county, city, and subdivision in which you live. They vary based on square footage, amenities, and condition. Some are overpriced. Some are "under-priced." Some are priced just right. Some buyers are over-motivated and will pay a higher price for a home than someone else. Some sellers are "under-motivated" and will "wait for their" price, only to have to drop their price every month until a motivated buyer meets the very motivated seller. Contact you local REALTOR or some builders to find out what is available. Contact a lender to be pre-approved for a mortgage.

It's cold and flu season. It is also that time of year when new homes and for sale signs pop up  like daffodils. The Stock Market is not the Economy. We can expect stronger data for a while. 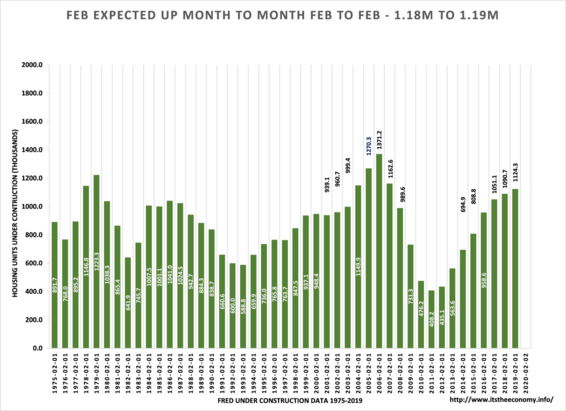 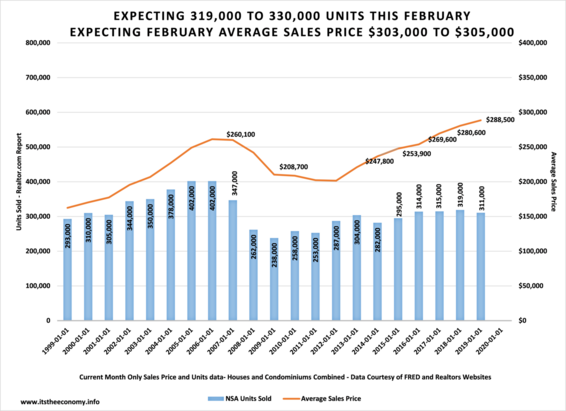 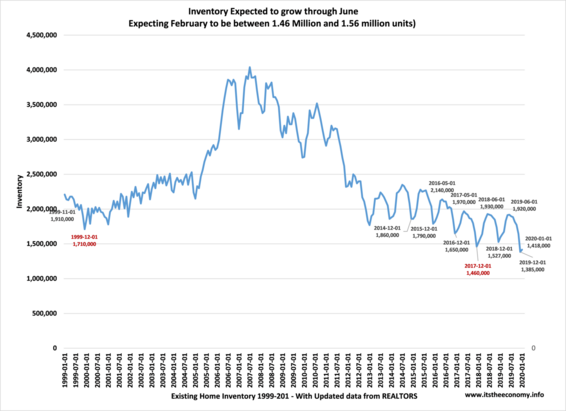 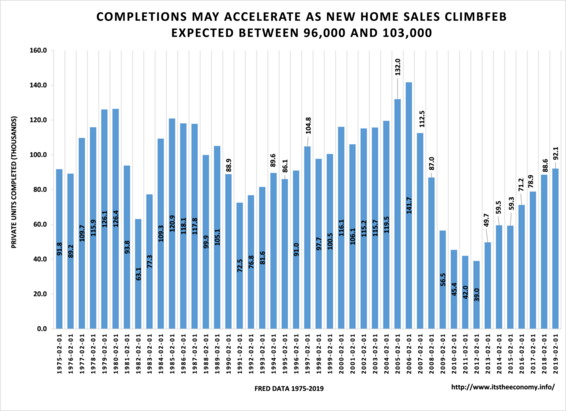