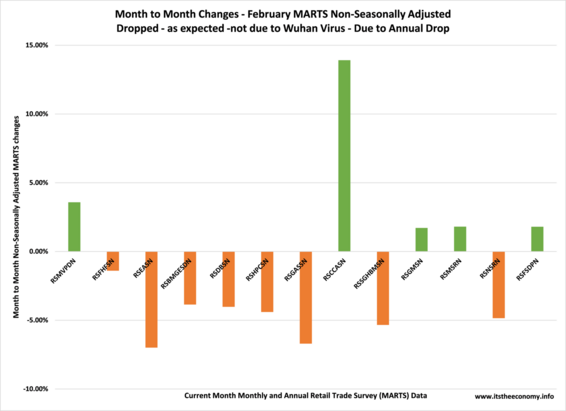 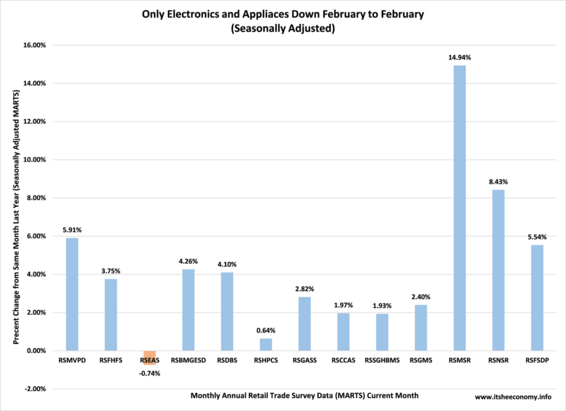 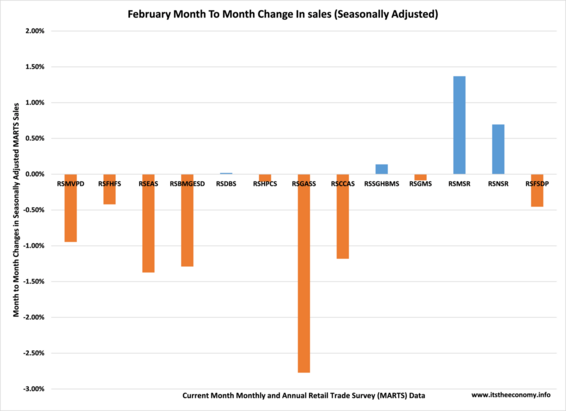 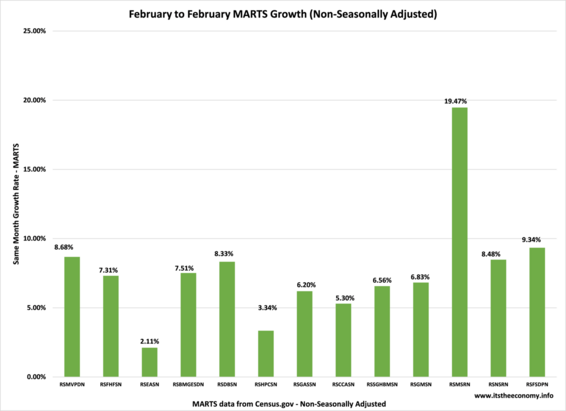 Wuhan Virus may lead to spikes in some sectors next month

The news is "All Wuhan Virus, All the Time." How many cases have been recorded? How Many people have recovered? How many people have died? The incidence rate in the United States is approximately 3.5 per million people. The caseload is roughly 19.48 per million. The case load in Italy is roughly 167 per million. People in the United States are stocking up on canned goods and toilet paper. This may impact next month's retail sales data. What can we expect from the February MARTS Retail Sales Numbers?

The Non-Seasonally Adjusted MARTS sales were expected to  decline from January to February. The data indicated that non-seasonally adjusted retail sales should have risen, month to month, for Clothing and Accessories (CAC) and Food and Drinking Places. Sales were expected to drop 3% to remain unchanged from January.We expected to see Non-Seasonally Adjusted Retail Sales rise between 4% and 5% from last February's level.The same month sales data indicated that we could see February to February declines in Furniture and Home Furnishings (FHF,) Electronics and Appliances (EAS,) SGHMB, and CAC as sales shift to NSR. The Non-Seasonally Adjusted data indicated that we could see sales between $465B and $480B on a month to month growth basis. The February to February data is indicating a range of $463B to $467B.

The Non-seasonally Adjusted Month to Month Growth recorded a February Record of $479.583 Billion. This was at the high end of what was expected.  We did see month to month declines in many sectors, including FHF, EAS, SGHBM, and CAC, as expected.

The Non-Seasonally Adjusted February to February Data recorded gains in all sectors, jumping 7.82%. It was thought that we might see a drop in CAC, SGHBM, and EAS this month from last February as more sales move to NSR. Non-Store Retail spiked 19.47%

The Seasonally Adjusted Data was pointing towards mixed results month to month. It was expected that we could report declines in MVP, EAS, SGHBM. The data indicated a growth, or a drop of 1% month to month, for total sales,  leaning towards a slight gain of 0.5%. The Seasonally Adjusted Data is pointed to declines in at least three sectors. The sectors expected to drop February to February were Gasoline (GASS,) EAS, and SGHBM. The headline seasonally adjusted MARTS was expected to come in between $530B and $536B based on the month to month data. The headline value should be coming in between $514B and $530B based on annual growth.

This spike in non-seasonally adjusted retail sales was projected. It was thought that the overall strength of jobs and wages in the economy would boost sales. It is also possible that some people were "fearing the worst" towards the end of February. The Wuhan Virus could have given us a Wuhan Bump. Next month we should see another spike in sales.

There will be another Wuhan bump, plus some people are receiving their tax refunds during March. The question is how will the increases in sales compare to prior years during the month of March. It is possible that we will see a sizable spike in Food and Beverage Store Sales. While the Legacy Media was discussing the 0.5% drop month to month they ignored the February to February growth "altogether."

The first two months of seasonally adjusted sales are up 4.61% and 4.69%. This means that, if as is frequently is repeated in the Legacy Media, that retail sales may up 70% of the growth in the economy, and if real estate construction continued through February and into March, we could have a 3% quarter to quarter annualized GDP.

There are some in the media who have been wishing for a Trump Recession since November of 2016. This may be the first media created recession. As of the writing of this article there have been 36,000,000 cases of the flu in the USA, with 370,000 hospitalizations, and 22,000 deaths. The Wuhan Virus has hit 169,387 people worldwide and killed 7155 people. The data for the US was 4661 cases of the Wuhan Virus and 85 deaths, at the time the MARTS retail report was released. Pay attention to the data - the Economic Data and the Wuhan Virus data.