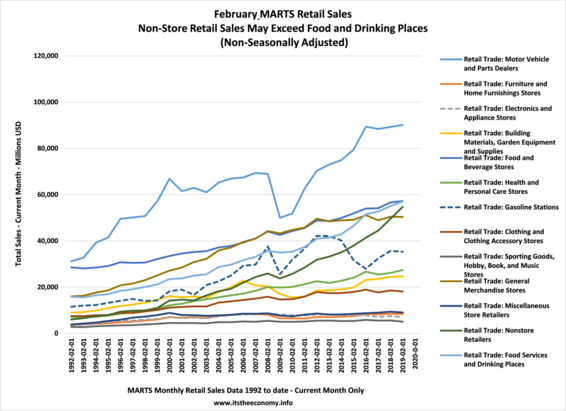 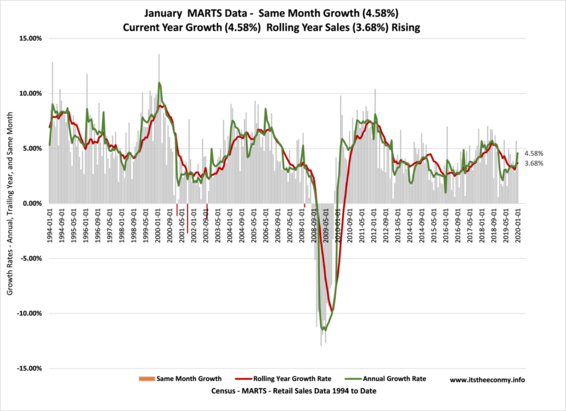 Wuhan Virus May lead to spikes in some Sectors Next Month

The news is "All Wuhan Virus, All the Time." How many cases have been recorded? How Many people have recovered? How many people have died? The incidence rate in the United States is approximately 3.5 per million people. The caseload is roughly 19.48 per million. The case load in Italy is roughly 167 per million. People in the United States are stocking up on canned goods and toilet paper. This may impact next month's retail sales data. What can we expect from the February MARTS Retail Sales Numbers?

The Non-Seasonally Adjusted MARTS sales should decline from January to February. The data indicates that non-seasonally adjusted retail sales should rise, month to month, for Clothing and Accessories (CAC) and Food and Drinking Places. Sales could drop 3% to remain unchanged. There is the possibility that they could rise up to 3%. If we go on the low end, then expected the February sales to be between $465B and $480B with an outside chance at $494B.

We should see Non-Seasonally Adjusted Retail Sales rise between 4% and 5% from last February. Last month we saw the Non-seasonally adjusted sales jump 4.58% from January 2019. This jump last month could be related to the spike in Jobs and Employment during January. It could also be due to the situation where we did not have a Government Shutdown this January.  We could see Non-store Retail (NSR) surpass Food and Beverage Stores (FBS) and Food and Drinking Places (FDP) this February.  The same month sales data indicates that we could see February to February declines in Furniture and Home Furnishings (FHF,) Electronics and Appliances (EAS,) SGHMB, and CAC as sales shift to NSR. If we grow 4% annually then we should see $463B in sales. If we rise 5% then we should hit $467B

The Seasonally Adjusted Data is pointing towards mixed results month to month. Last year we had weakness in MVP, Miscellaneous (MISC) sales, EAS, Health and Personal Care (HPC,) BMGE, CAC, SGHBM, and General Merchandise (GM.)  We should report declines in MVP, EAS, SGHBM. The data indicates a growth, or a drop of 1% month to month, leaning towards a slight gain of 0.5%. This would yield a range of $524B to $5356B, leaning towards $532B.

The Seasonally Adjusted Data is pointing to decline in at least three sectors. THe sectors expected to drop February to February are Gasoline (GASS,) EAS, and SGHBM. This is probably truer this year than previously as gasoline prices have been declining. Last year we had sales of 504 billion. We can expect a 2% to 5% growth February to February, probably leaning closer to 6% due to last February's Government Shutdown. We should expect sales of $514B to $530B based on February to February Growth.

Expect February Record sales to be recorded, possibly reported. The Non-Seasonally Adjusted data is indicating that we could see sales between $465B and $480B on a month to month growth basis. The February to February data is indicating a range of $463B to $467B. Expect the NSA MARTS right around $465B, a record for February.  The headline seasonally adjusted MARTS should come in between $530B and $536B based on the month to month data. The headline value should be coming in between $514B and $530B. This means that we can reasonably expect a number right around the $530 billion mark, a record for February.

The good news should continue for the time being. There are some in the media who wil focus on any decline month to month, seasonally adjusted, as a reason for concern. Some may even blame the decline month to month as signs that the Wuhan Virus is impacting the economy. If they looked at the data prior to the release of the report then they might realize that this is a normal event during February. Next month the data is expected to spike because that's what happens, non-seasonally adjusted, during March. People are getting their tax refund checks.  Will this happen? Will we shift more sales to Non-Store Retail and to carry-out? We will have to wait and see. Watch the revisions and the growth rates.