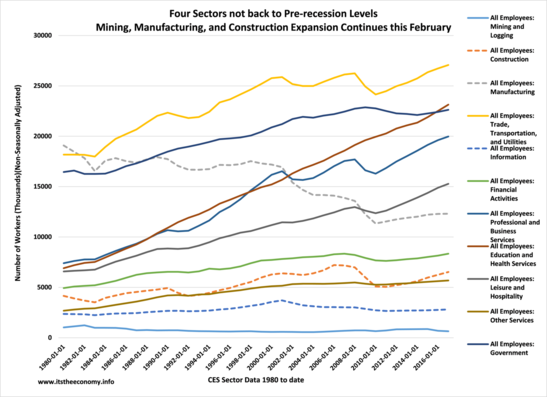 The Under-reported Comebacks of Mining, Manufacturing, and Construction

The February Employment Situation report was spectacular. This was the best February Jobs Report under any President since and including Ronald Reagan. We saw a record level of February Current Employment Statistic (CES) workers added during February. We also saw upward revisions to the December and January seasonally adjusted (SA) CES data which "lowered" this month's SA CES data. We saw the seasonal factor used to convert the non-seasonally adjusted (NSA) CES data to the report SA CES data drop, thereby lowering the reported SA CES private sector worker number. We saw a record level of Current Population Survey (CPS) jobs created during February.  This was even better than the previous record month of February 2002 and significantly higher than February 2016 and February 2017. President Trump has had the best first thirteen months of a Presidency compared to Presidents Reagan, Clinton, George W Bush, and Obama. Even with all of this terrific data, four sectors have not recovered from the recession. Three sectors have been showing consistent improvement during the past five years.

Good News: Ten out of Eleven Super Sectors added workers during February. The only sector that lost workers last month was the Trade, transportation, and Utilities super sector.  This was expected. "Which Sectors Will Grow This February" called out the TTU sector as one that could contract. The trend has been for the Information sector to decline year over year. This was verified in the non-seasonally adjusted data.

Spike in Low Wage Jobs brought down average wage. A s pike in Education and Health Services, as well as Leisure and Hospitality, may have brought down the seasonally adjusted private sector hourly earnings. Wage increases of 2.9%, year over year, during the January Jobs report "spooked" the markets. Leisure and Hospitality pays the lowest average wage, followed by Retails Sales.

Four Sectors still have fewer workers than February 2008. The peak jobs market, pre-recession, was July 2007. We nearly matched that level of Jobs during July 2008 before Hurricane Ike cause and Ike Spike in gasoline prices. Since the bottom of the recession all sectors except Government are off their bottom levels. This has been an incomplete recovery.

Month to month growth was up in all sectors except the TTU super sector. Annual growth was up in all sectors, including TTU, except for Information.  The largest growth rate by sector, over the past year is in Construction. The two largest sectors of real additions are the Professional and Business Services (PBS) and Education and Health Services (EAH) Sectors.  This is all l great news. 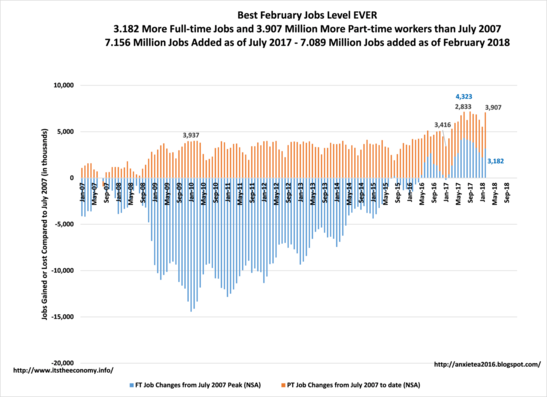