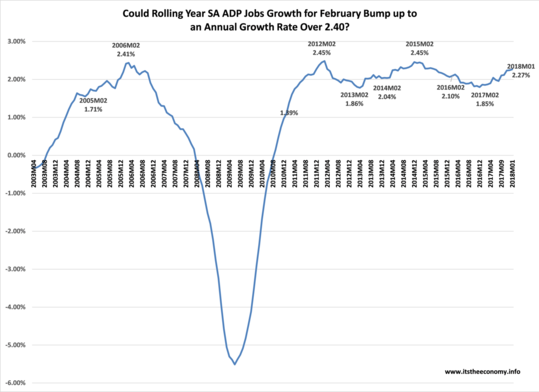 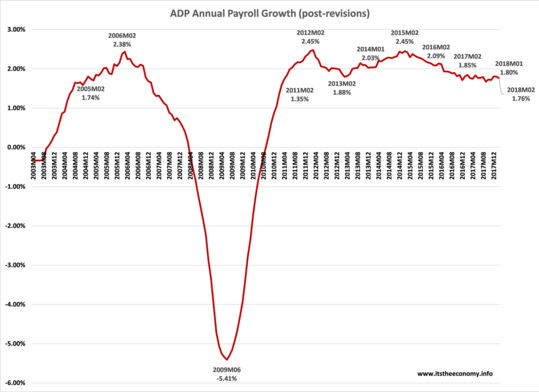 The January Jobs Report brought some surprises in the form of massive Current Employment Statistic (CES) revisions to the seasonally adjusted and non-seasonally adjusted worker levels and a major revision to the Current Population Survey (CPS) population level. Instead of having a huge January Jobs report whereover 400,000 workers could have been reported as having been added to the private sector, only 196,000 private sector workers were added to the economy. Last month the ADP payroll was growing at a rate of 2.27%. This is significant because the growth projections in the ADP Forecast article for this month used this February growth rate and data from prior Februaries to project the strong February ADP Payroll number.

All of the data from last month's report was revised. This morning the ADP report for February was released. The data was significantly different from the January ADP Report. These revisions caused this writer to publish a tweet showing the differences.

What's the big deal? Instead of growing 234,000 in January we are falling from 244,000. This "stole" 9,000 jobs from February. The February number could have been reported at 244,000, which would have been comparable to last February's 249,000. Now it is being reported as a decline from last February and this past January.

Still expect a strong Jobs report this Friday. The revisions that hit the ADP report this February hit the CES data last month. The advance data for the jobs report will be revised this month and next month, and if history is any indication, it will also be revised plenty more times in the months and years to come.  The ADP report indicates that all sectors except Information Technology added jobs during February. This aligns with what is expected for the seasonally adjusted data for the Employment Situation report. This was a good report. The revisions to prior data skews the interpretations for other analysts. The Devil is in the data.