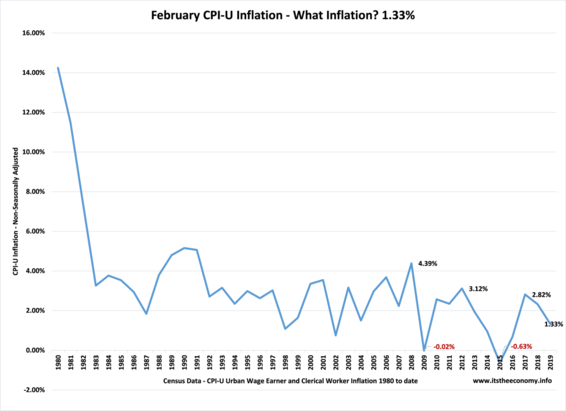 There have been discussions that the wage gains that we have seen have been an illusion.Instead of just discussing wage growth  the naysayers are discussing nominal wage growth and real wage growth. Nominal means no-adjustment for inflation. Real  growth is measured against inflation. We have been experiencing Shelter inflation, We have Service Inflation, Medical Inflation, and Health Insurance inflation at rates higher than the average rate of inflation.We have been experiencing commodity deflation and some energy deflation. What happened this month? What was reported in the February CPI report?

We had no month to month (MTM)  inflation during November, December, or January. This is huge. There were some revisions to the data that turned slight gains or slight losses to no change.

This means that whatever changes happened month to month in services through inflation was offset by deflation in commodities the past three months.

We had Inflation reported at 1.6%, excluding food and energy,  and 2.2% for all items. I would like to exclude food and energy costs most months. This excluded number is another form of government math. We saw commodity deflation and service inflation, again. We saw shelter inflation over 3%, again. If you look at the index for CPI-U (the urban wage earner and clerical worker inflation) that value is only 1.33%.

We had Health Insurance  Inflation of 7.7%. This is being actively ignored in the media.  If you examine the data you will find that the weighting of some sectors has been rising while others have been falling. You will also note that the numbers add up to more than 100% for where we are supposed to be spending our money.

If something takes up a larger portion of your monthly spending, that would be considered inflation to most people. If you spent $1.00 of your income on something last year and it cost you $1.07 this year that is 7% inflation. If you sent 1.00% of you money on something last year and you spent 1.07% of you money on the same thing this year then that is 7% inflation. The combined difference between what we spent on insurance last February, $43, to this February $46,  was 7.0% (6.97%.) Who really only spends $46 a month on health insurance?