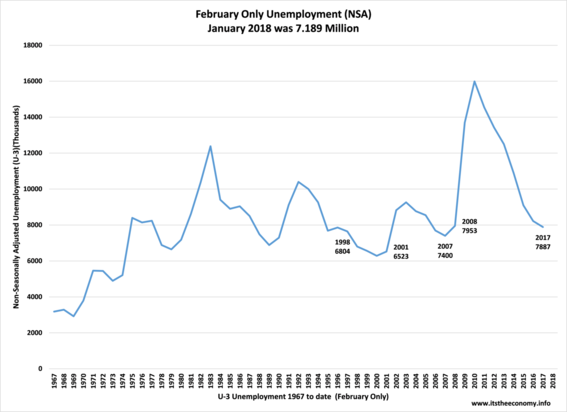 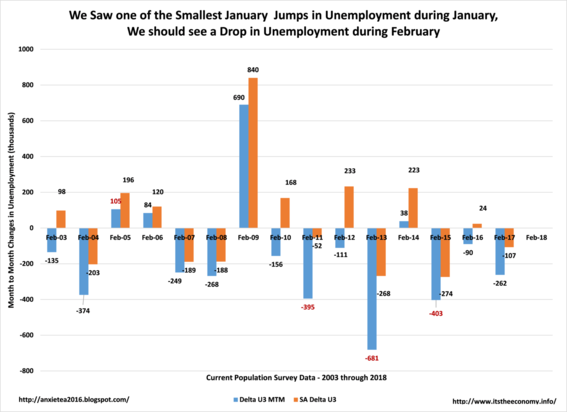 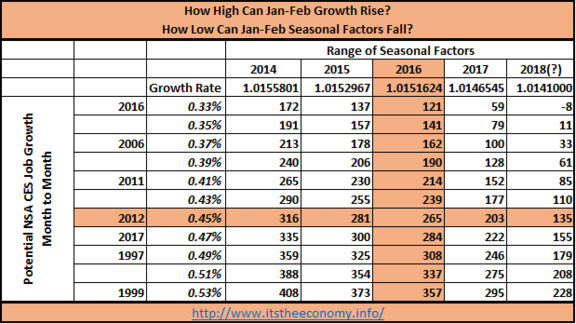 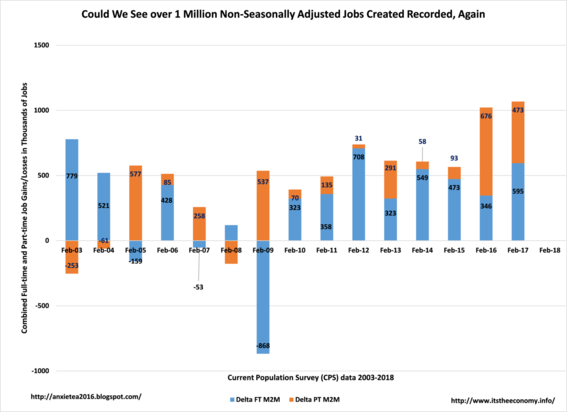 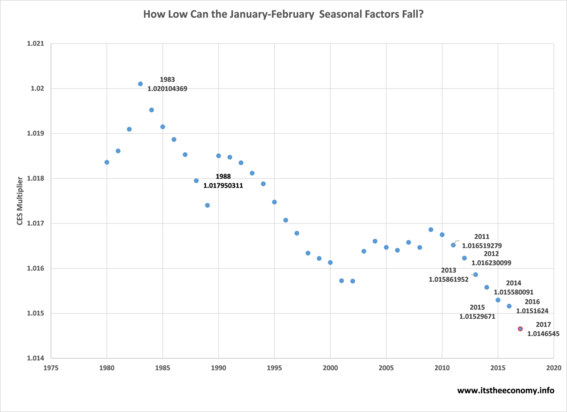 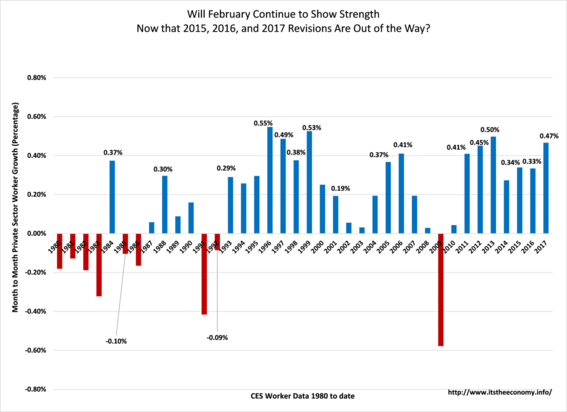 Will Real February Worker Growth Be Reported that Way?

Last month we received some exceptionally good jobs and worker data in the January Jobs Report. The problem is that the authors of the report, and the people who adjust the data on a month to month and year to year basis, decided to revise the 2015 Current Employment Statistics (CES) data down and revise the 2016 and 2017 CES data higher. These upward revisions to the data, especially the December 2017 CES data meant that instead of reporting that 452,000 seasonally adjusted private sectors were added to the economy they reported that only 196,000 seasonally adjusted private sector workers were added to the economy.  The jobs report has a second data set that is used to calculate the workforce participation rate and participation rate. The Current Population Survey (CPS) data was unedited except a huge spike in the Workforce Population. A downward revision to the workforce population number for the January 2017 Jobs Report boosted President Obama's final participation number. The bump up in the workforce population during January of 2018, a larger growth rate than November-December would have dictated, reduced the workforce participation rate. The upward revision to the January 2018 population was identical to the downward revision of the January 2017 population. The items that have to be recognized are the growth rates, the seasonal factors, and the revisions to data from prior months.

Expect Private Sector Worker Growth to remain strong. The question is "How strong should we expect the February Private Sector worker growth to be recorded?" Last February we saw an unexpectedly large spike in private sector worker growth. The seasonally adjusted private sector worker number was the basis for President Obama's Private Sector Worker Growth FACT (False Assertion Considered to be True.) This was one of the economic urban legends propagated during the Obama Administration. Consumer confidence is high. Employers are indicating that they will be hiring more workers. We did not see as many January layoffs as we could have seen (there have been non-seasonally adjusted job and worker losses every January since 1981.)

The data that is used to calculate the workforce participation rate vary by each of its components. The seasonal factor for full-time jobs could be used to skew the data lower. The seasonal factor used to convert the non-seasonally adjusted part-time data could be used to skew that number lower. The seasonally adjusted data for the unemployed worker data "will" skew the unemployment level "higher," that is the level will not drop as much in Governmentland as it will in Reality.

This jobs report will be "eagerly anticipated." The stock market has been jittery this year. The jobs report "disappointed" most observers last month. It was a huge surprise to me because the growth from the originally reported December values was a huge spike. We are not only seeing jobs created and workers returning to the workforce, we are seeing unemployment at record low levels.  There are considerably more covered insured than there were during 1998 and 2001. There were 117.6 Million covered insured during February of 1997 and 126.8 million covered insured during February of 2001. This year there were 141 million covered insured. This data is significant.  You have to know what to expect in order to understand what we will receive. Will the report be received positively if it "beats expectations?" Will some try and call the report "too good" after years of recovery? 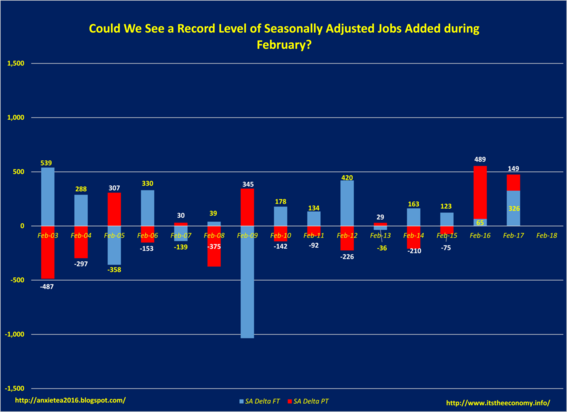