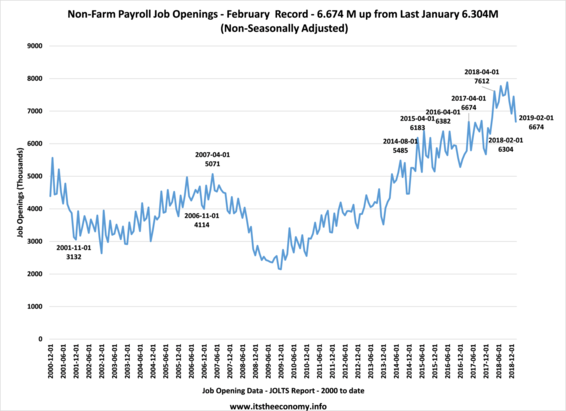 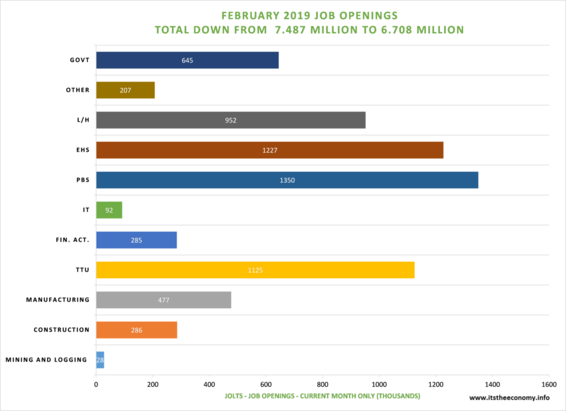 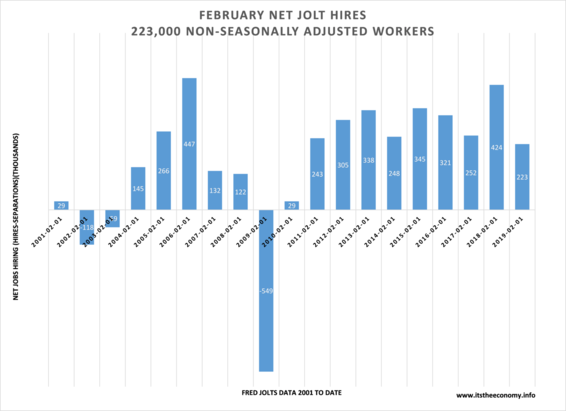 The February Jobs Report was "The Tale of Two Data Sets"

This column published a number of articles regarding the February Jobs Report:

So what happened from the JOLTS report perspective during February.

Last week we received a First Quarter Layoff Report in addition to the Jobs Report.  The consulting group Challenger, Gray, and Christmas produced a first quarter layoff reportclaiming that we saw the most layoffs during the first quarter of 2019 since the third quarter of 2015. Their report stated

This is all well and good. Remember that this is a different survey with a different margin of errors and a different sample size than the JOLTS data.

What does the JOLTS Layoff data have to say about this?

If we look at the percent change how do they compare?

Job Openings Set a February Record at 6.708 million units. There are some in the media who are trying to push the narrative that 7 million job openings is a "healthy level" of Job openings. We never had 7 million job openings until 2018. Never.  The most jobs openings were in Professional Business Services (PBS,) Education and Health Services (EHS,) Trade, Transportation, and Utilities (TTU,) and Leisure and Hospitality (LAH.)

February Separations set a February Record at 4.474 million workers. The data changes from category to category while the message is the same. Separations were highest in PBS, TTU, LAH, and EHS.

February Quits set a February Record at 2.856 million workers. This data is similar, not identical to the Job opening and Separations data. The top four sectors wereTTU, LAH, PBS, and EHS.

February Hiring was at an all-time February Record at 4.695 million workers. Once again, the leading sectors were PBS, TTU, LAH, and EHS

It is difficult, if not unrealistic, to compare two, three, four, or five data sets and expect to come up with consistent results. The CES worker data, the CPS jobs data, the JOLTS job openings data, the Weekly unemployment Claims data, and the data from Challenger, Gray, and Christmas are supposed to give us some insight into the economy. It is similar to the five blind men describing an elephant as one grabs the leg, the other the trunks, the third its tusk, the fourth its side, and the fifth the tail. The first thinks that the elephant is a tree. The second blind man thinks it is a snake. The third thinks that it is an icicle. The fourth thinks it is a rough wall. The final blind man thinks it is a piece of rope. We have the ability to open our eyes and examine the data and detect changes.