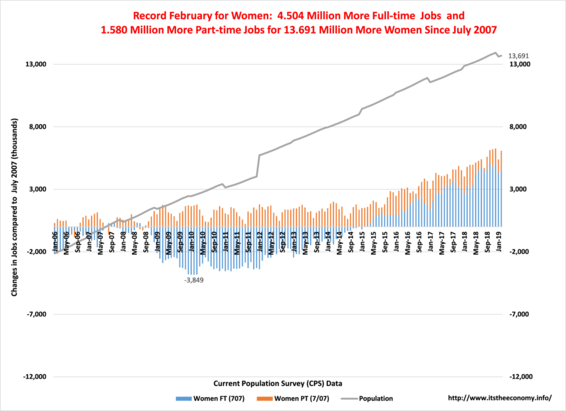 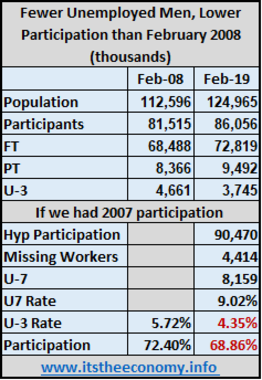 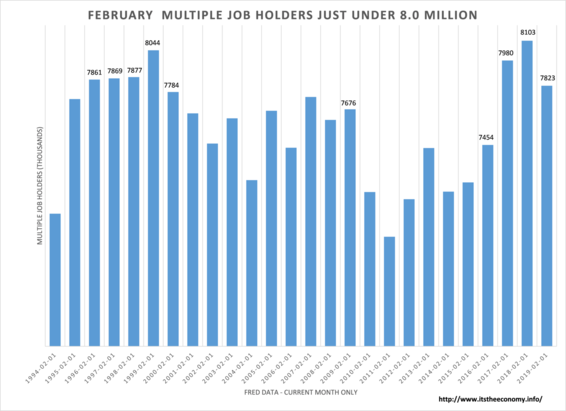 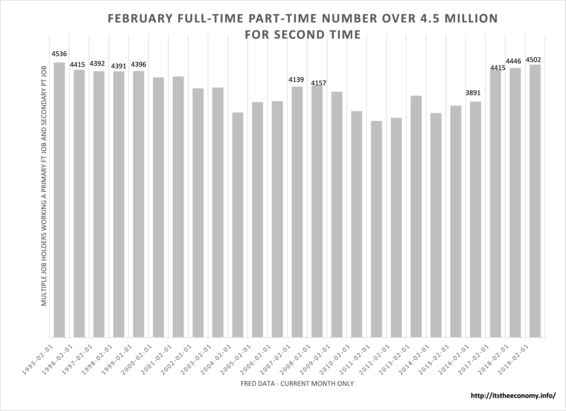 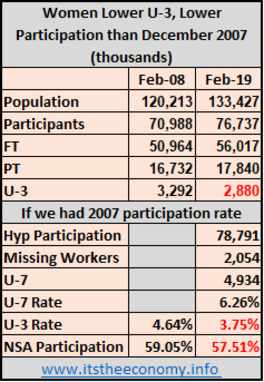 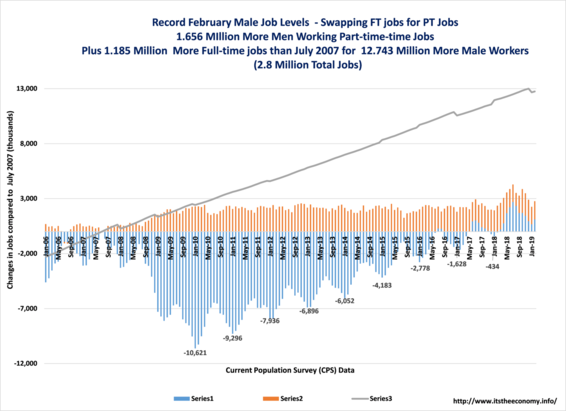 Men, Women, and Multiple Job Workers on the Rise

The February jobs report was misreported in the mainstream media. The headline was that there were only 20,000 non-farm payroll "jobs" creates during February. The problem is that this is not true. The Current Employment Statistics data used for the headline value measures workers. The Current Population Survey (CPS) data measures jobs and unemployed workers. The CPS data  recorded over 1.2 million non-seasonally adjusted (NSA) combined full-time and part-time jobs added to the economy during February. This is how the worker data came in weak and the participation and unemployment data came in strong.

This column has already published a number of articles regarding the February Jobs Report:

The question is why does this recovery and expansion not receive the notice that it has earned? How are men and women doing?

There was a "War on Women" during the 2012 election cycle. There were "binders full of women" that Republican Presidential candidate, now Senator, Romney had in his office. This column, and its companion site "Reclaiming Common Sense," detailed the "Jobs Iceberg" that had formed between July 2007 and January 2010. Full-time jobs were lost and part-time jobs were added, creating a two tome iceberg similar to the "icebergs" for men and women.  The 2016 election brought back the "War on Women" conversation when candidate Fiorina made a comment that "92% of all the jobs lost under President Obama were occupied by women." If anything, 72% of all jobs lost belonged to men. Men lost 10.421 million full-time jobs. Women lost 3.849 million full-time jobs.

The Male Jobs Iceberg is finally a Jobs Mountain. There were fewer full-time jobs for men from August 2007 through July 2016 than they had during July 2007.Men occassionally went positive during the Summer of 2016 and the Summer of 2017 before going negative during December and January. This January, January 2019,  was the first January where we had more full-time jobs than we had during July 2007. Men had the most combined full-time and part-time jobs this past Summer, July 2018, than they had ever had. Now, as of February, there are more jobs worked by men than any prior February.The Unemployment level, technically, is lower than it was during February 2008. There is a significantly different participation rate for men compared to February 2008, 688.86% versus 72.40%. This means that we are "missing" 4.4 million participants. Participants are employed or unemployed workers.

The Female Job Mountain continues growing.  Women recovered from the Great Recession faster than men. Women recovered all of their lost full-time jobs by the Spring of 2015. They have had record employment months, combined full-time and part-time jobs, for much of 2017 and 2018.  The female participation rate is approaching the level that it was during February 2008 with a rate of 57.51% compared to 59.05%. Where we are "missing" 4.4 million male workers we are "only" missing 2 million female workers.

The Number of Multiple Job Workers is off the February Record Levels of  2018.  Multiple job workers are those who are counted as having a Full-time job and a part-time job, two part-time jobs, or two full-time jobs. There are also some who may be working more than two jobs, We had over 8 million dual job workers during February 2018 when we set a record for the month at 8.103 million dual job workers when it was reported last march. There were also 4.425 million people working a full-time job and a part-time job.  This February we "only" had 7.823 million MJH. There were 3.846 million men working multiple jobs and 3.904 million women working multiple jobs.

We eclipsed 4.5 million workers working a full-time and a part-time job during February  for only the second time. We had 4.502 million FT PT or PT FT workers during February this year. The first time this happened was February 1993.  There is an anomaly where the combined number of  dual full-time workers (FT FT,) plus the number of dual part-time workers (PT PT) plus the number of people working two full-time jobs (FT FT) does not equal the total number of multiple job workers (MJH or multiple jobholders.) Even when you add in the "variable hour workers" it doesn't equal the total MJH. It is possible that there are those who make less at their full-time job than they do from their part-time job.  These are the PT FT workers.  There were 2.399 million  men who worked  FT PT or PT FT compared to 2.053 million women.

The CPS data indicates that women recovered their  lost full-time jobs faster then men. It may because they lost 7 million fewer full-time jobs than what men lost between July 2007 and January 2010.Recent worker expansion, using the CES data, indicate that sectors that are typically male dominated sectors, Construction, Manufacturing, mining and Logging, Professional Business Services, and Information Technology are adding more workers than they have been adding during the "Male Worker Ice Age."  There are more women in the workforce than there are men, so it makes sense that they added more total jobs this month than men added between January and February.  Both genders are winning.