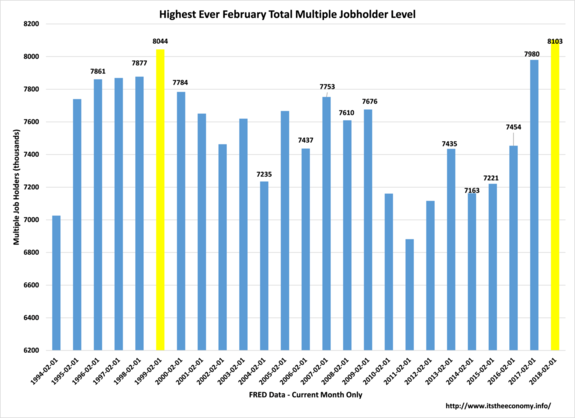 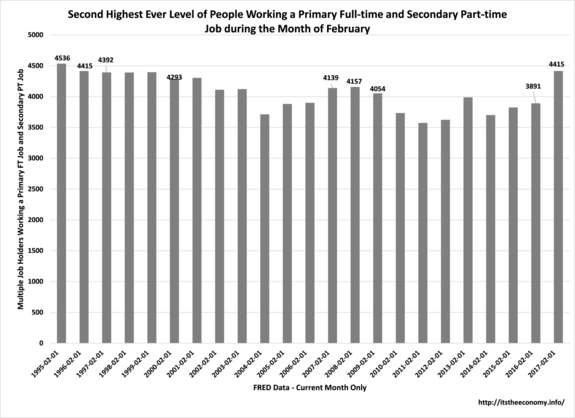 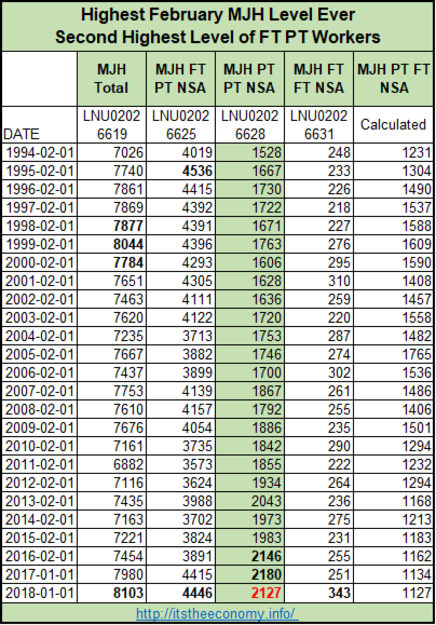 One group  of the interesting statistics that rarely receives the attention it deserves is the number of people working multiple jobs. Workers can work two full-time jobs, two part-time jobs, or a primary full-time job and a secondary part-time job. A statistical oddity in this data set is the workers who job hours vary. You would think that all of these combined who equal the total multiple job worker data. It does not. There is the possibility for a person working a primary part-time job and a secondary full-time job. We have seen record levels of people working multiple jobs during the recovery from the 2008 Recession. The elevated levels of multiple job workers mean fewer people are working more jobs. As was referenced in the earlier article regarding this week's  weekly unemployment claims data, people who work multiple jobs do not earn unemployment benefits when they lose one job. People who lose one job do not receive "lesser employed benefits" when they lose one of their jobs, even if it is a full-time job. Here is the untold story this month.

We have a record February Level of 343,000 People working two full-time jobs.  We have seen over 300,000 people working FT FT twice during February prior to this year: February 2006, at the peak sales price year for the existing home market, and during February 2001, prior to the terrorist attacks of September 11, 2001. People who have jobs are finding it easier to find another job. Some people are choosing to keep two jobs.

The February jobs report was remarkable and yet under appreciated, as was the January Jobs Report.There is momentum in this economy. There is also an elevated level of missing participants, people who are neither employed nor unemployed, as is detailed in the "Five Presidents at 13 Months" article. Millions of workers are sitting on the sidelines. Some workers may have been out of the workforce so long that they find it hard to find a similar job to the one that was lost. Some people may be being "aced out" by people who already have full-time jobs. The workforce participation rate is improving people more jobs are being added than unemployed workers are "lost." The drop in unemployed workers drops the participation rate. Changes in population also impact the participation rate. Even with upward revisions to the workforce population this past January, President Trump has added more jobs than workers.

The elevated levels of MJH workers should mean that we see a continuing decline of first-time unemployment claims through the end of September, and we should see a decline in continuing claims until the first week of October. Multiple Job Workers will peak during July before dropping back during August and September, before rising to this year's peak level during either October, November, or December.