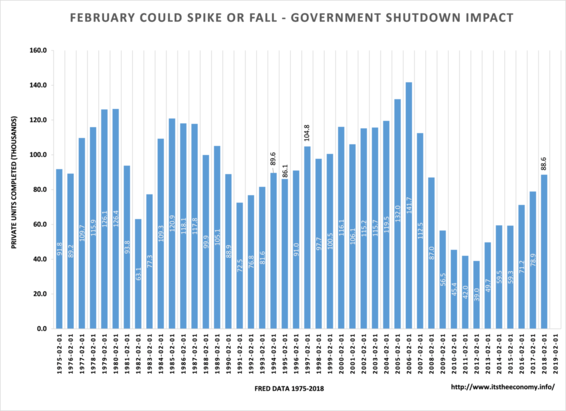 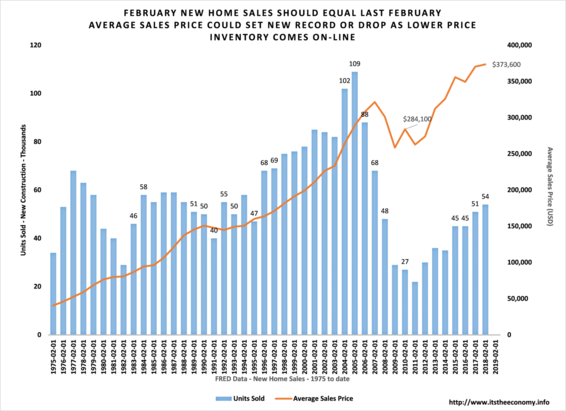 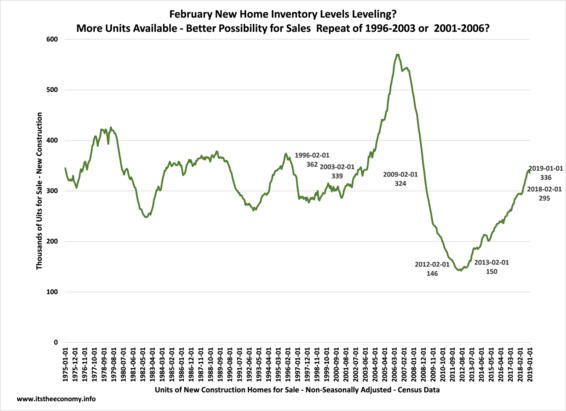 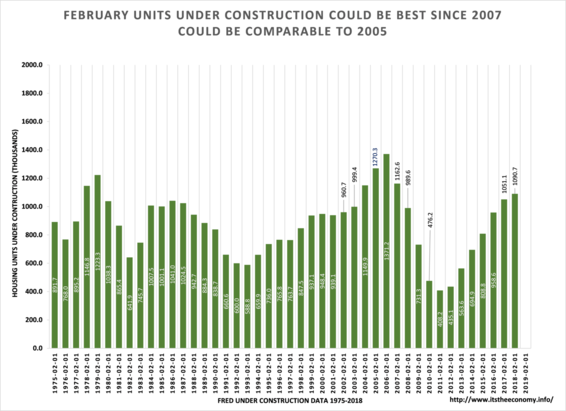 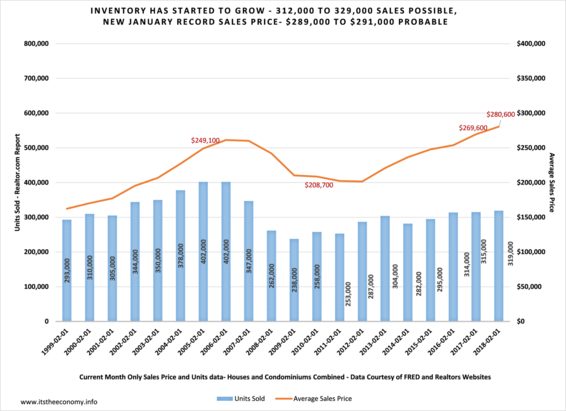 Existing Home Inventory had been faltering from 2015 through most of 2018.

The existing home sales data was lackluster last year as inventory continued to be in a drought. The existing home data only stretches back to 1999. January of 2017 we had out lowest "ever" inventory level. January is normally the lowest inventory month of a year due to weather and due to school and work schedules. Existing Homes could surprise to the upside for the same reason that new home sales could surprise to the upside: The Government shutdown has ended.

Existing Inventory has increased year over year, same month, since August. The July Existing Home Inventory was identical to the July 2017 inventory level. Inventory tends to improve February through July. We already have more inventory than we had during February 2018. The month to month data indicate that we could pop up to 1.7 million units. The overlap is between 1.638 million and 1.674 million units. Higher average sales prices last year may have convinced more potential home sellers to de-clutter and fix up their homes for sale this Spring, once the Super Bowl was played. Expect a value around 1.65 million units.

This column produced an article that said that the Government Shutdown might not show up in the Gross Domestic Product data. Gross Private Domestic Investments, including new construction, was anticipated to be "set" for 2018 and that any January delay would be absorbed during February and March. The Government Shutdown appears to have impacted the real estate sector. Will be get a spurt of good news, sustained good news, or something else. Will we end up better during 2019 than 2018. It will take a few more months to see the trends. Often where we start determines where we finish. Fortunately, while we missed the starting gun, this is a twelve lap race. There is plenty of time to press for a strong finish. 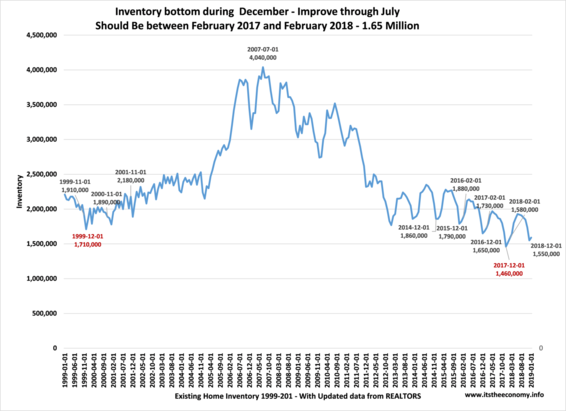 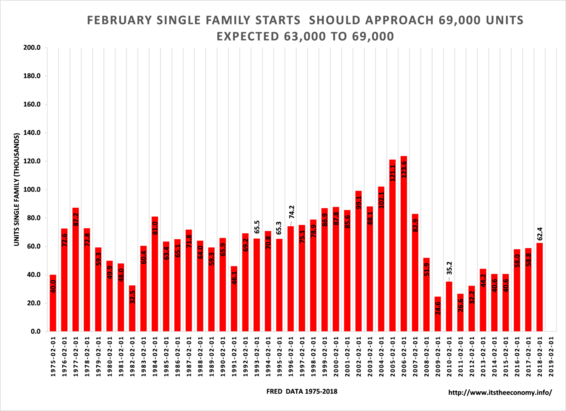 New Home Sales and New Home Inventory have both been languishing

You need new home inventory to make new home sales.  The new home inventory level languished under 300,000 units from early 2009 through early 2018, We were approaching 600,000 units in inventory during 2005 and 2006 while we had record levels of new construction sales. Inventory is up more than 10% compared to where we were during February 2018 when we were at 295,000 units. Inventory levels could drop this month, based on normal month to month trends. The overlap is between 329,000 and 336,000. Anything under 336,000 would be a drop in inventory. There is the possibility that it could continue its climb and head towards 342,000 units this month.

New Home Sales have been trending higher February to February. The way that this forecast is created is to compare month to month changes and same month changes. Where to the two calculations overlap is where it is anticipated that we will see the data reported. There is no overlap for new home sales this month. Last month's stumble of 45,000 units sold could mean another stumble this month. Last year's 54,000 February  units means that we could see up to 59,000 units sold this month.  It has been postulated here that the government shutdown shutdown the loan approval process. There was an article published elsewhere during Mid-January that confirmed this suspicion. If the units sold during December and January were "artificially depressed" by the government shutdown, it is possible that the new home sales data, and the existing home sales data, could be "artificially stimulated" this month and future months. Do not be surprised if the new home sale data drops a little from last February's 54,000 level. Do not be surprised if it surges to 59,000. Could we hit 69,000 units this month? Possibly. Expect 59,0000 to 64,000.

Stability in inventory and units and sales price is okay.

January activity may have been held back by the Government Shutdown

The December New Home Construction  data and theDecember New Home Salesdata allowed the end of the year data to be the best for both since 2007. January was a little sluggish, both for the January  new home sales and new home construction, possibly due to the weather, possibly due to the Government Shutdown. The December Existing home sales  data showed improving inventories even though 2018 was slower than 2017 for units sold. The January Existing Home Sales  data showed weaker than projected sales and an improving inventory level. Did the "Government Shutdown" shutdown loan approvals and restrict the number of closed deals?

Some New Construction Starts may have been shifted from December and January to February.  New home starts have been rising during February since 2014. The 70,000 level used to be the "floor" for February prior to the recession. If we should expect 62,000 during February, there is the possibility that we could see some carryover into February and hit the 69,000 level. We could  see even more spillover into February and move up to the 75,000 range.

New Construction Completions have slowed recently - may show a spurt in advance of the Spring Market. The month to month data is projecting very weak completions data. The February to February data is projecting strong data. The delay is not denial thinking is data. We could see data spike up into the mid-90,000 level or it could falter. Normally when the data does not overlap month.  to month and same month that means to "expect the worse." It seems certain that completions were slowed because of the government shutdown. February was the first full month outside of the Government Shutdown. The thinking is that we should see something in the same range as last February's completions level, or at least 88,600 units.

Net-Net this is like getting B's and C's when you have been getting D's and F's. We used to have expectations of February starts in the 75,000 to 85,000 range. We used to have completions data in the 95,000 to 115,000 units level during February. Only the under construction data is back to pre-recession levels. The missing elements in most articles in the mainstream media is home much new construction is being impacted by the wildfires out west and the tropical weather brought to the United States due to hurricanes and tropical storms.