The Federal Deficit and federal Debt are receiving a little bit of attention after an eight year period of actively ignoring the data. The Unpatriotic and irresponsible debt that increased from $5 trillion to $19 trillion under President George W. Bush, including the TARP Program that was almost completely repaid under President Obama, the vast majority of which was repaid with interest. The irresponsible and unpatriotic debt nearly doubled under President Obama, increasing from $10 trillion to over $19.8 Trillion under President Obama, even with the repayment of TARP. This column has written numerous articles on this topic. What needs attention is that "off-budget" item are not off-budget. The corporate taxes have not started rolling into the Treasury, Interest on the debt is soaring. So what else is in the November Treasury Report?

Interest on the debt this year is $62 billion, so far. This is up from $51 billion during October and November of 2016. The authors of the report are projecting $503 billion dollars for the interest on the debt this year.  The same authors are projecting a $534 billion on-budget deficit and a $* Billion off-budget Surplus. Think about it - almost all of our deficit spending is due to interest on the debt. It was going to take 30 years of monthly "mortgage payments" of $117 billion a month to pay down an $18 trillion debt during Thanksgiving of 2014. We have mortgaged our future. We have added over $2 trillion to the debt in just over 3 years.

The solution is fairly simple. Start by not spending more than was taken in in revenue the prior year. Remove "off-budget" items - revenue and spending - from the monthly Treasury Report. Start paying down the debt - which may start when Quantitative Tightening begins. 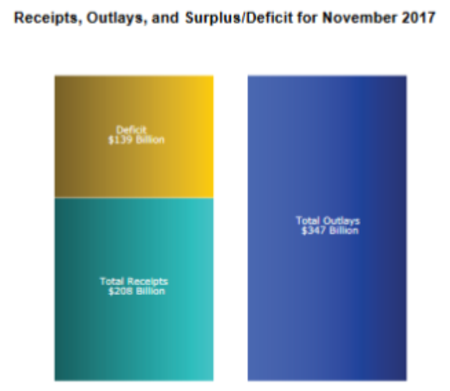