This column has written numerous articles regarding the Federal Debt as well as the Federal Budget and the Federal Debt. The Federal Budget is an Urban Legend. A budget allocates money based on income and expenditures. The end result is supposed to have either a revenue neutral budget where revenue meets expenditures or a surplus so that shareholders receive dividends and employees receive bonuses.  The Federal Budget is a spending proposition with very little thought as to surpluses or deficits. It as if they are in a perpetual "Black Friday" and think because they are saving 70% and still have room on their credit card that they do not have to worry about the bank statement that is coming.The problem is that the government has been robbing Peter to Pay Paul for decades. They have been dipping into "Federal IRAs" to pay for Christmas Past, Present, and Future.  Some of the best work on this topic can be found in four prior articles:

We have not reduced the debt since that time. The debt exploded under President Obama from just over 10 trillion dollars to 19.875 trillion by the time he left office, in part due to "Quantitative Easing." Quantitative easing was a trick played by the Federal Reserve where $85 billion dollars a month was "spent" on keeping interest rates low. This "War on Interest Rates" cost us over $1 trillion dollars a year. Now the Federal Reserve is talking about Quantitative Tightening - the selling of this debt.  WE have a spending problem, not a revenue problem.

Last week the Monthly Treasury Report Was Released - We are $20.5 Trillion in Debt. Last week the Treasury Report, the Consumer Price Index (CPI)  report on inflation and the MARTS Monthly and Annual Retail Trade Survey data were all released on the same day. The CPI data revealed that we have a bifurcated inflation/deflation situation where commodities are experiencing deflation and services, plus shelter costs, are experiencing inflation. The MARTS data revealed that were are on track for our best Retail Sales Year ever. The October Treasury Report included the end of the year data for FY 2016-2017. Table 3 of the report details how we brought in $3.315 trillion dollars in revenue - $850 billion was "off-budget." This month the first report for the 2017-18 FY was released. We took in $235 billion last month compared to the $221 Billion we took in during October 2016. We do not have a revenue problem.

The Talk is Reigning in "Entitlements" when the Deficits are created in Discretionary Spending. Off-Budget outlays were $801 billion last year, up from $775 billion the prior fiscal year. Off-Budget Revenue exceeded Of-Budget spending. This is where the question becomes if "Off-Budget Revenue is Off-budget what is it doing reducing On-Budget Deficits?" On-Budget Spending was $3.179 trillion during FY 2016-2017, up from $3.077 trillion during FY 2015-2016. On-budget revenue went from $2,456 trillion to $2.464 trillion. Simply, on-budget revenue increased by 8 billion dollars while on-budget spending increased by $102 billion.

The solution is to set discretionary spending at the level of revenue we had last year. On-Budget receipts during FY 2014-15 was $2.478 trillion. There was a drop in corporate taxes that went unreported in the press - it was reported here. We need to set spending for FY 2017-18 at $2.5 trillion. We also need to include in that spending at least $100 billion in debt reduction. This is not $100 billion a month, it is $100 billion - slightly more than one month of Quantitative Easing. If the Federal Reserve institutes Quantitative Tightening this will free up room in the Budget and reduce the debt even faster, which is good because the interest rate on the debt will most likely increase from where it is right now.

We do not have a revenue problem, we have a spending problem. The problem is that Congress discusses balancing the budget within ten years while member of the House only serve 2 year terms and Senators only serve 6 year terms. They are, in effect, saying that they cannot balance the budget during their time in office, even though some people have been in office since the 1980s. This is not Black Friday for the government. This is crunch time. Just because they have checks in their checkbook doesn't mean that they have cash in their accounts. We have to run the government as the biggest business in the country. 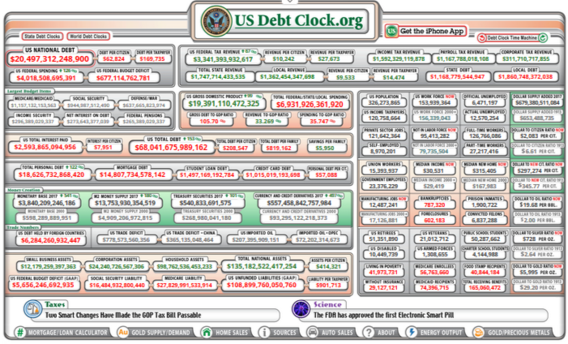