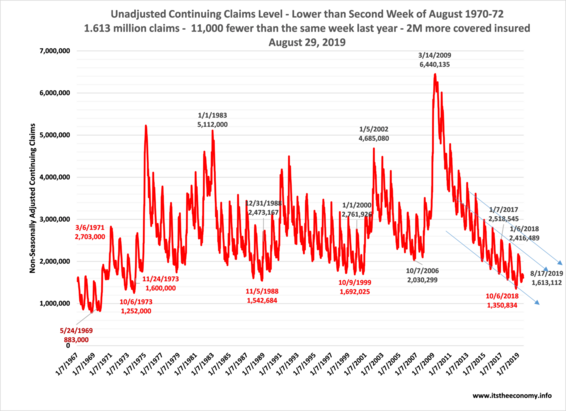 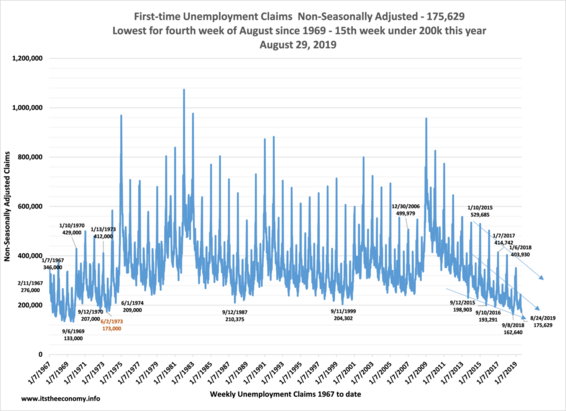 First-time Unemployment Claims Level is Under 200,000 Claims for

the Fifthteenth Time This Year

The weekly unemployment claims data includes information on the First-time Unemployment (FTU) claims data, the Continuing Claims (CC) data and the Insured Unemployment Rate.  Last week the non-seasonally adjusted first-time unemployment (FTU) claims dropped to 169,613 while the seasonally adjusted (SA) FTU was reported at just 208,000 claims. NSA Continuing Claims (CC) were recorded at 16.616 million while the SA CC was reported at 1.696 million. Both the NSA FTU and NSA CC were expected to drop this week. What was recorded and what was reported this week?

Non-seasonally adjusted first-time claims lowest for the fourth week of August since August 18, 1973. This week there were fewer claims than the same week of August during 1970, 1971, and 1972. There were only 175,629 claims this week. This is a slight uptick from the prior week, and still fewer than last August with 2 million more covered insured this year than last year.

Continuing Claims fell to 1.613 million claims. This is 11,000 claims lower than the same week last year. We have over 2 million more covered insured this year than we had last year.

The seasonally adjusted continuing claims level came in at 1.698 million. This is the lowest that the NSA CC value has been since August of 1973. This level is also lower than it was during the same week of August during 1970, 1971, and 1972.

The insured unemployment rate (IUR) remained steady at 1.12%. The lowest that this value had been between 1967 and September 30,  of 2017 was 1.13%. The IUR is the portion of "covered insured" who are receiving continuing unemployment claims.

This continuing data collected last week was the data week  collected closest to the same day at the Current Population Survey (CPS) data. The CPS data counts those who say that they are unemployed and looking for work. The weekly claims data measures the number of unemployed workers who were working and are now unemployed. This is a big difference. Both  the SA CC value and SA U-3 unemployment rate should fall through October.

It is dangerous to compare the different data sets. The CPS data is for measuring jobs, full-time and part-time, and unemployed workers. The Current Employment Statistics data measures wages and workers. They have different sample sizes and margins of error. The JOLTS job opening data is comparable to the CES wages and workers data. It is not comparable to the CPS U-3 data. The Continuing claims data is a cousin to the U-3 unemployment data. Related. Not identical.

This writer has had some conversations with others who believe that these low levels of claims are indicative of a major "correction." We could have said the same thing during October of 2015, October of 2016, October of 2017, and October of 2018. This decline in continuing claims will continue until it ends. The same week data is pointing to a strong Fall. We have a record level of workers, a record level of full-time jobs, and a near all-time record high of Multiple Job Workers. A second job is the best form of unemployment insurance.  The elevate level of multiple job holders could push the weekly claims level even lower than it already is being reported. 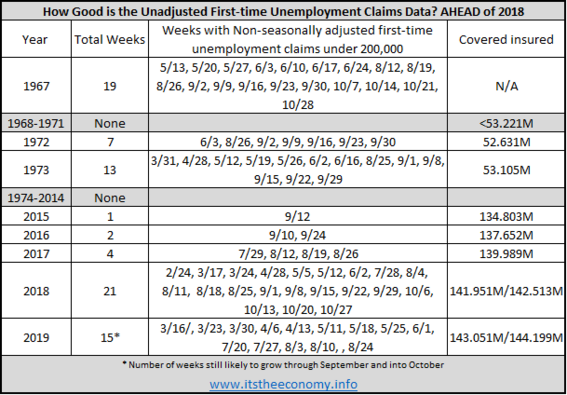