Non-seasonally adjusted first time unemployment claims came in at 323,880 . It was projected that the non-seasonally adjusted (NSA) first-time unemployment (FTU) claims data would bump up by between 4% and 14% this week,  or between 296,000 and 325,000 claims. This is not as bad as it sounds because the "unemployment claims streak" of under 300,000 claims is based on seasonally adjusted data. This FACT, False Assertion Considered to be True, is one of the Economic Urban Legends of the former President Obama Administration. The 323,880 was remarkably low when you consider the last time we achieved this during the final week of the year was December 27, 1969. We have over 140 million covered insured right now. We had fewer than 53 million covered insured back then. 3880 claims for 90 million more workers. This is remarkable.

We have had weeks this December where the seasonally adjusted first-time claims data could have been reported under 200,000. Seasonal factors matter.  We set a record 21 weeks with the non-seasonally adjusted FTU claims data being recorded under 200,000 claims. We started recording these exceptionally low values during February last year. We have been under 300,000 SA FTU every week of the Trump Presidency. There were 490,000 NSA FTU claims during the final week of December 2012.  We had 525,710 Christmas of 2010.

The Non-Seasonally adjusted Continuing Claims data came in at 1.788 million claims. It was projected that the NSA CC value could drop by 3% or increase by 4%. This would place the NSA CC value between 1.704M and 1.827M. There was a possibility that it could spike by 14% to 2.002M NSA CC and be reported at 1.845M SA CC.  These numbers should not be of concern because we are much lower than we were this time last year. We had 277,000 claims fewer than we had during the final week of 2017. This bodes well for next week when we receive the data for the final week of December NSA CC. It also paints a rosy picture for the first week of January when there will be a spike in claims - it happens every year during the first week of the year.

This data is remarkable. It is remarkable that "nobody" discusses it. It is remarkable because we have so many more workers than we have ever had and so few claims. We may record one of the smallest spikes for first time claims for the first week of the year next week. Two weeks from now we may have one of the lowest ever first-week of January continuing claims value recorded. The insured unemployment rate will be, you guessed it, remarkable. 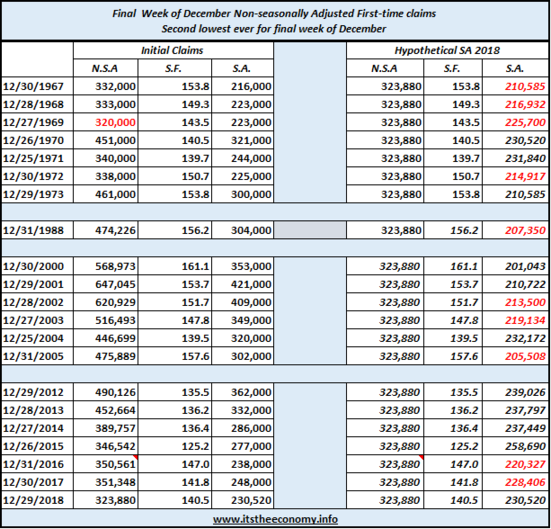 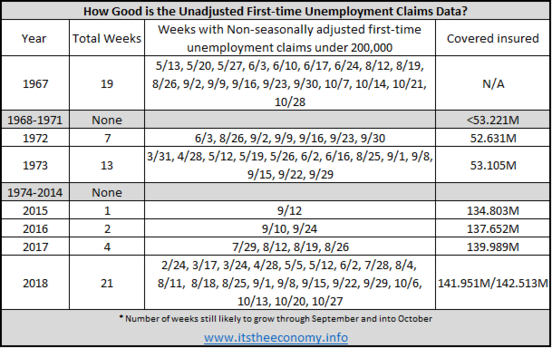 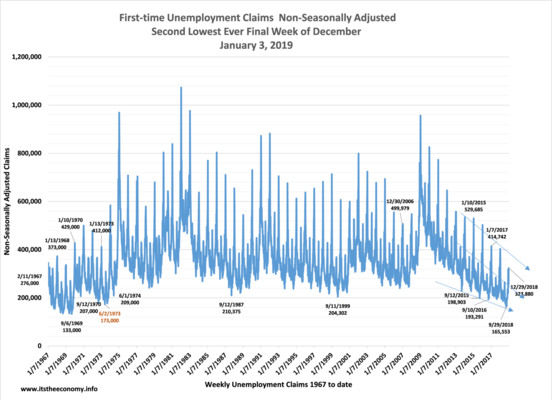