The World was ending during December, according to some "experts."

Headline Annualized GDP came in at 3,2%. This was even higher than this column projected. This is normally the weakest quarter of the year. This is even including the Government Shutdown. It is important to note that the annualized GDP for 2018Q4 was revised down to 2.2% from 2.6%. It is also important to note that we only had two official "reads" on the  fourth quarter GDP, the "advance" value and the "final" value. There was no official "preliminary value" released due to the Government Shutdown. It appears that last month's "final" value was actually the "preliminary vale" and the revision to the q4 data was the "final" revision this month.  There will be another revision to this data when the "annual revisions" are released with the second quarter GDP report.

Headline growth driven by Gross Private Domestic Investments and Exports. Personal Consumption Expenditures only grew by 1.2% quarter to quarter. This seems low and may be revised higher over the next two GDP reports. Gross Private Domestic Investments (GPDI) increased by 5.1% while exports increased by 3.7%. What is being missed by most commentators is that the imports fell by 3.7%. Government Consumption Expenditures increased by 2.4%. This means that the four drivers of the economy are all in the positive.

Gross Private Domestic Investments and Exports accounted for most of the annualized growth. Table 2 of the GDP report show that Net Exports added 1.03% of the 3.2% annualized GDP, while GDPI added 0.92%, PCE added another 0.82% and GCE added 0.41%. There have been times during the past decade where GDP growth was driven by PCE, and where  Government Spending was adding a negative value to the GDP.

Same Quarter GDP grew by 3.2%. We also saw the fourth quarter "final" GDP value revised lower, as well as the Annualized GDP. The new "final" Fourth Quarter GDP is 3.0%. This is the eleventh straight quarter where the GDP has equaled or bettered the preceding same quarter GDP value.

Same Quarter GDP growth was driven by  Gross Private Domestic Investments and Exports. PCE grew by 2.7%. This is more rapid than the current rate of inflation. Exports are up 2.3%. Imports only grew by 1.6%. GCE grew 1.8% from first quarter last year. 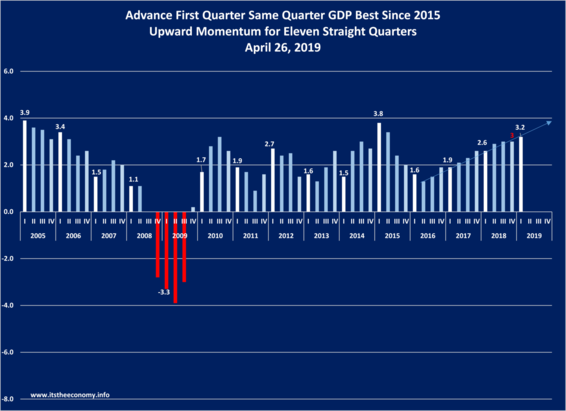 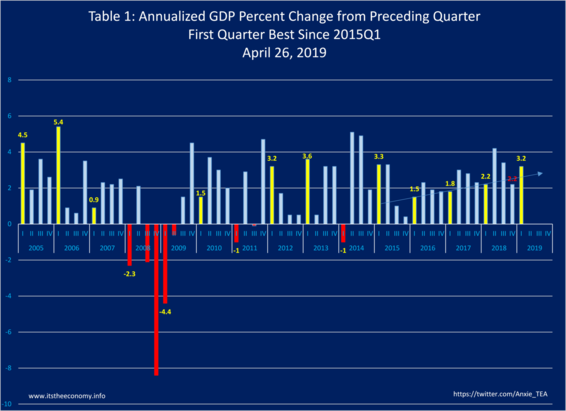