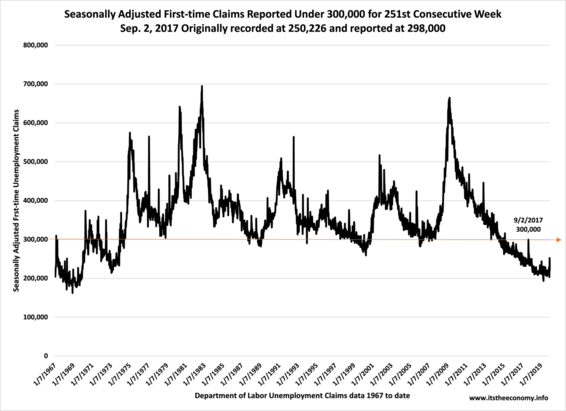 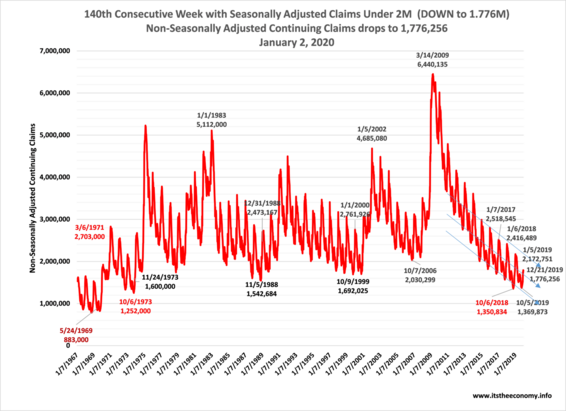 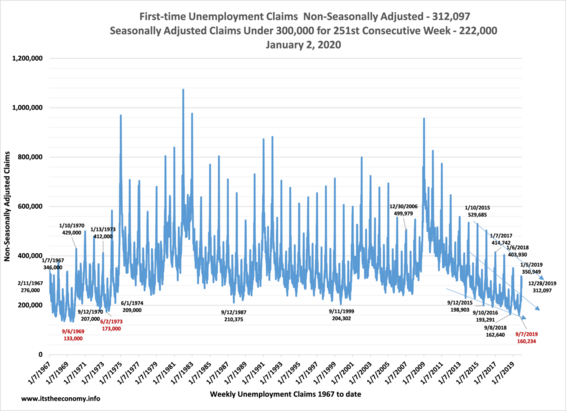 There was a time where the seasonally adjusted (SA) first-time unemployment (FTU) claims data was breaking news at the bottom of the hour. The last time that this number was covered in any detail was in the pre-2016 election period under former President Obama. They were counting down the weeks until they hit 100 consecutive weeks with the SA FTU under 300,000 claims. The President Trump won the election. Last week we hit 250 consecutive weeks. That happened Boxing Day. What happened this week?

The Non-seasonally adjusted (NSA) First-time Unemployment Claims level rose, as expected. The NSA FTU rose to over 312,000 claims, as projected. This is what this column calls the "Scrooge Effect." Workers needed during the weeks leading up the Christmas are released. They may be part of store closings. They may be government lay-offs. Manufacturing jobs tend to peak during December and drop after the 12th of the month. This level is slightly higher than the fourth week of December last year. last year was a five week December. We also have 2.2 million more covered insured this year compared to last year, so a difference of 21,000 more claims is minor. The first-time unemployment rate is up to 0.22% from last year when it was 0.20% and down from 0.23% during the fourth week of December 2017 when it was 0.23%

The Seasonally Adjusted First-time Claims was reported at 222,000, if it was reported at all. This means that we have had 251 consecutive weeks with the SA FTU under 300,000 claims. The Obama SA FTU streak is an Economic Urban Legend. The seasonal factors were manipulated to create the streak and keep the streak going forward. The people in control of the data even revised the seasonal factor used to convert the NSA value of September 2, 2017 from 298,000 to 300,000 claims when new seasonal factors were published last year. This was the Labor Day Hurricane Data for Harvey and Irma. The reported streak persists this week.

The NSA Continuing Claims level fell this week to 1.776 million claims. Normally we see rising claims from October through the first week or two of January. This is better than the best level of 2000 when we had 2.030 million claims. This is also slightly higher than what we had last year during the third week of December. The NSA Insured Unemployment Rate (IUR) matched last year's 1.19% IUR for the third week of December - a record for this week of the year.

The Seasonally Adjusted Continuing Claims are under 2 million claims for the 141st consecutive week. It is difficult to compare this with any other period because the program started with fewer workers and fewer claims.

The weekly claims data gives us some insight as to what we might expect from the December Jobs Report. It is treacherous to compare different data from different data sets, especially if they have different seasonal adjustments. Not all unemployed workers qualify for unemployment benefits. That said, the NSA CC during the second week of December 2018 was 1.700 million and this year it was 1.718 million claims. We may or may not see a new record low for the U-3 unemployment level. The unemployment rate should remain very low, and may be a level not seen since the unemployment benefits program started during January of 1967. Next week we will find out how good the data is or was.