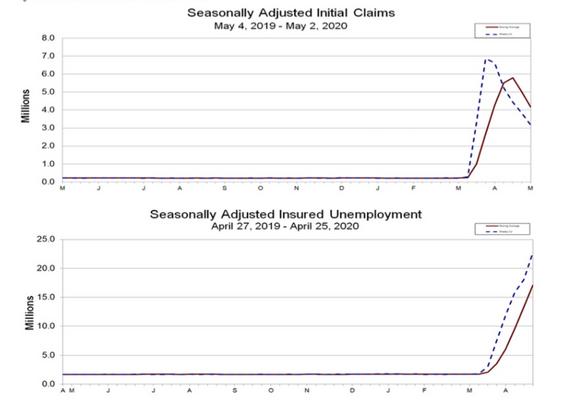 Data is being misconstrued in the media.

We saw 2.849 million new first-time claims recorded this week. That was the non-seasonally adjusted data. The seasonally adjusted data was reported at 3.169 million claims There are no comparable for this data during the 53 years since the start of the program during 1967. Some in the Legacy Media were reporting this as good news because the numbers have been declining since we nearly hit 7 million claims during one week. We had fewer than 300,000 SA FTU claims for nearly five years prior top the Wuhan Virus and State Government deciding to shutdown their economies.

We have a record level of 22.065 million people recorded as maintaining continuing claims. This is unprecedented. The SA CC value is also unprecedented at 22.647 million claims. There are some in the media who are touting that we have had more than 30 million claims during the past six weeks. This is an error of omission.

We have an Insured Unemployment Rate of 15.1%. This is important because the April CPS unemployment rate should not hit anywhere near this level. The NSA IUR during the week closest to the CPS collection date, April 11, was recorded at 11.2% NSA and reported at 10.9% SA.

Some final thoughts. The weekly unemployment claims data that was available at the time when the Jobs Report data was collected had "only" 16 million unemployed and an IUR of "only" 11%. The media will be clamoring for an expected level of 30 million unemployed workers because they ignore the collection date. Almost all of the continuing claims data is "Normal" unemployment (16.249M out of 16.503 million.) This means that we have either not seen the worst of the claims data (more Pandemic Unemployment Assistance, Pandemic Emergency UC, extended benefits, State Additional Benefits, and "STC/Workshare" claims will be coming) or we may have turned a corner and will not need all of the emergency benefits approved by Congress. Finally, this weekly claims report, and the monthly Jobs Report, is really a furlough report, or are furlough reports. People will be recalled to work as soon as Governors decide to reopen their states.

This is the era of "if it bleeds it leads." It is also the ra of "if it hurts the re-election prospect of President Trump it dominates the Internet and Television, and the few remaining papers that exist." In an effort to sound smart some people sound plain stupid.