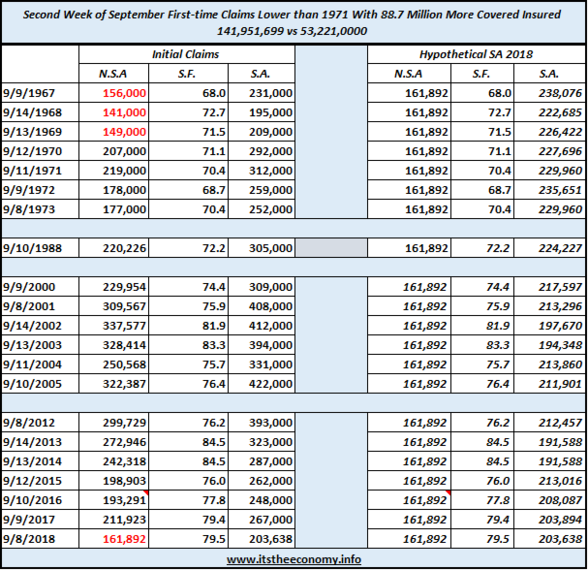 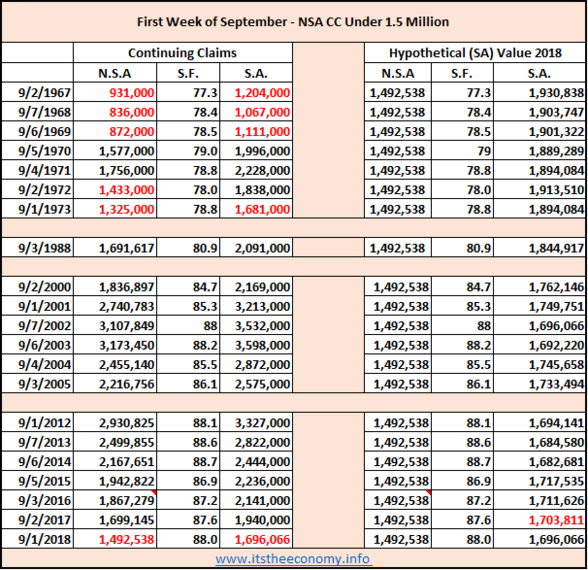 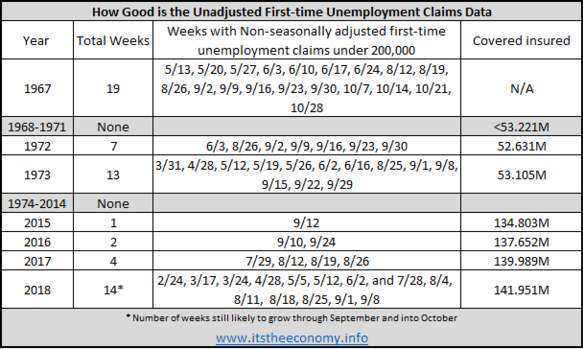 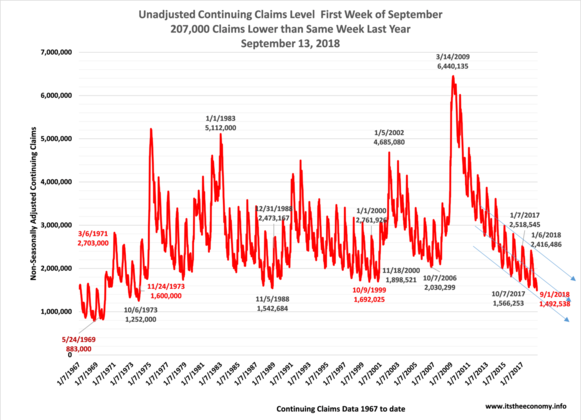 How Low Will First-time Claims for Anybody Else to Notice?

The first-time claims data used to be "Headline News at the Bottom of the Hour" while it was dropping  from nearly 1 million claims to 800,000 claims to 700,000 claims and lower. It was thought that a President could not get re-elected if the seasonally adjusted first-time claims data was over 400,000. The seasonally adjusted (SA) First-time Unemployment Claims (FTU) data was considered to be strong if it was under 300,000. Now we have the non-seasonally (NSA) FTU claims under 200,000 claims for the 14th time this year. The seasonal factors that are used to convert the NSA data to the SA data change by category, FTU or Continuing Claims (CC,) week. month, season, and year. The SA CC value is considered to be strong when it is under 2 million claims. What happened this week?

The Non-Seasonally Adjusted First-time Claims level was under 200,000 for the 14th time this year. The NSA FTU was recorded at 161,892 claims. This is lower than it was during June of 1973. This is lower than it was during the same week of September 1970, 1971. 1972, 1973, up to this year. It is probable, not guaranteed, that the NSA FTU value will fall through the end of September. It could continue to fall through October as employers search for Christmas Season employees.

The Non-Seasonally Adjusted Continuing Claims Level fell below 1.5 million for the first time since November 1988. We are already have fewer continuing claims than we had during the first week of October last year. We are over 200,000 claims lower this week than the same week last year. If this continues we could have under 1.4 million claims next week, and we could challenge the 1.252 million continuing claims level recorded during the first week of October 1973.

The Seasonally Adjusted First-time Claims Level may be difficult to eclipse, this year. We have had fewer than 1 million NSA CC totals during the 1960s and 1970s. Once again, we had  nearly 90 million fewer covered insured.

Check with your state for applicable programs in North Carolina, South Carolina, Georgia, and Virginia.

Last year we saw a spike in unemployment claims after the disasters created by Hurricane Harvey, Irma, and Maria. We may see another jump this year. The "good news" is that we are past the Labor Day Weekend and peak employment on the Outer Banks. There will be considerable clean-up required. The population centers hit by Irma and Harvey pushed the NSA FTU claims from 196,000 claims to 250,000 claims, and boosted the SA FTU to 293,000. It is unlikely that we will see a spike of 50,000 claims within the next one to two weeks. The claims data is collected on Saturday.

Buckle up, get out of the way of this storm, and stay safe.

It's more than the economy - it is your life and livelihood. 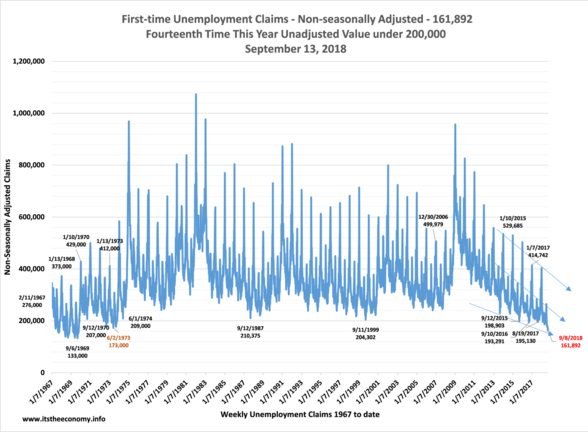