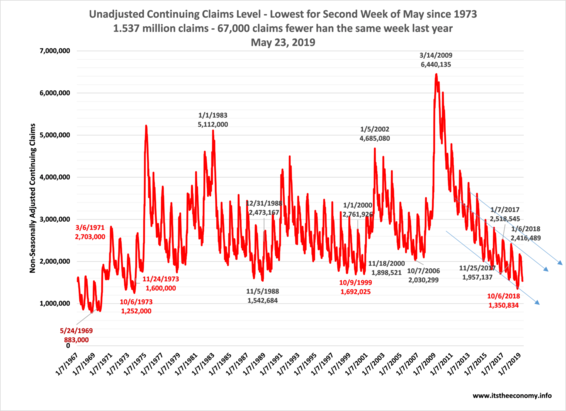 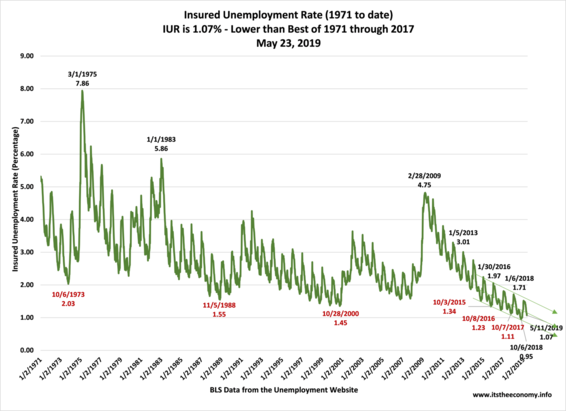 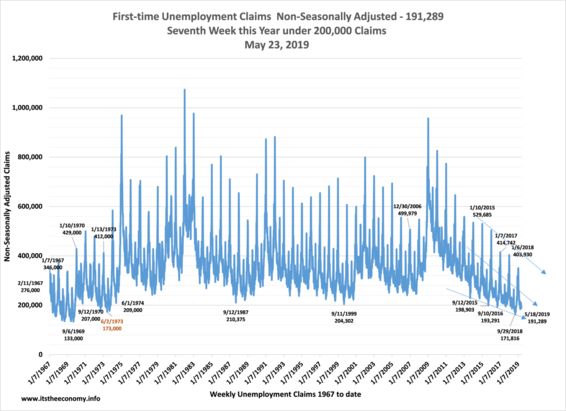 The numbers are so good that they are being actively ignored.

The seasonally adjusted (SA) first-time unemployment (FTU) claims data used to be headline news as it was dropping below 300,000 claims. When it dropped below 200,000 claims earlier this year barely a peep was made. Two other measures receive very little attention: The continuing Claims (CC) data and the Insured Unemployment Rate (IUR) data. That's a shame. What was recorded and what was reported this week?

The non-seasonally adjusted first-time claims data was recorded under 200,000 claims for the seventh time this year. It was projected that he Non-seasonally Adjusted (NSA) FTU claims number would fall 3% to 5% and that the seasonal factor would place the SA FTU claims could come in between 196,000 and 201,000 claims. The first-time claims level did not drop, instead it rose ever so slightly from 188,264 claims to 191,289 claims. This is still lower than it has been during the third week of May since May 19, 1973 when it was 189,0000 claims. Remember that we have 143.629 million workers who are covered insured this week compared to the 58.629 million covered insured that same week of May 1973. We have only 2,000 more claims for 85 million more workers.

The seasonally adjusted first-time claims data was reported at 211,000.  If we used last year's seasonal factor then the value could have been reported under 210,000 claims. This is still good considering that under 300,000 was headline news for the first two years of this four year "streak."

The SA Continuing Claims data was reported at 1.676 million. Down was reported as up. The SA CC could have been reported lower if they used any of the seasonal factors for the second week of May since 1967.

The Insured unemployment remained steady at 1.07%. This is the percentage of the covered insured who are receiving benefits. This is the lowest it has ever been during this week of the year. Last year we were at 1.11%. The record low was set last October at 0.95%. Could we drop below 0.90% this year?

This is the data collected closest to the collection date for the May Jobs Report. There are many in the media that want to conflate the Current Population Survey (CPS) unemployment data with the JOLTS (Job Opening and Labor Turnover Survey ) Data for Job openings. The JOLTS data is comparable to, not identical to, the Current Employment Statistics (CES) data. Neither the CES data nor the CPS jobs and unemployment data are identical to the weekly claims data. This is like comparing and Apple to a pear to an orange to a pomegranate. All four are fruits. People who say they are out of work and looking for work are different from those who were working and who are now unemployed.  We could see a new low for May U-3 unemployed workers according to the CPS data or it could bounce higher even as continuing claims fall because people are looking for work.

This was a remarkable number. We are in uncharted territory. How Low can we go?