The weekly unemployment claims report used to garner bottom of the hour headline status as the seasonally adjusted claims level dropped from 500,000 to 400,000 to 300,000. The discussion shifted to the number of consecutive weeks under 300,000 SA FTU. Fifty. Sixty. Seventy. Eighty. Presidential election. Crickets. That streak is approaching 250 consecutive weeks. The continuing claims streak and the insured Unemployment Rate streak are still alive. Crickets.

The First-time Unemployment Rate was just 0.16% - Tied for a Record Low for this week of the year. The FUR is something that this column has started to promote. The lowest that this had ever been was 0.17% during September 1999. The FUR during this week 2016 was just 0.16%. The FUR allows us to compare data from roughly the same time of the year while "adjusting" for covered insured growth. The FUR during 2017 and 2018 were both 0.17%. We are still in a good place.

Continuing Claims rose slightly to 1.442 million claims.  Last week we had 1,423,655 claims. This week we recorded 1,442,434 claims.  The Cassandras will say that this is higher than last year. It is. There are 5,800 more claims this year than the first week of November last year. Again, we have 2.1 million more covered insured this week than the same week last year. The 5,800 claims is a typical revision for the continuing claims data.

The Seasonally Adjusted Continuing Claims data was reported under 2 million for the 134th consecutive week.  Crickets in the media because there are crickets in the report. This streak started April 1, 2017.

The Insured Unemployment Rate (IUR) was recorded at 1.00%.  This was the eighth consecutive week with claims at or under 1.00%. Last year was the first year where the IUR dropped below 1.00%. That happened seven times last year. Another record ignored. 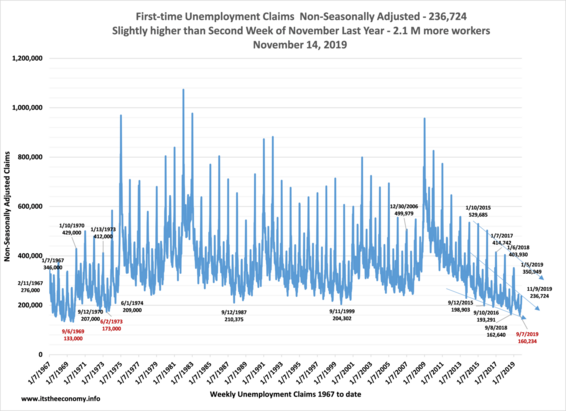 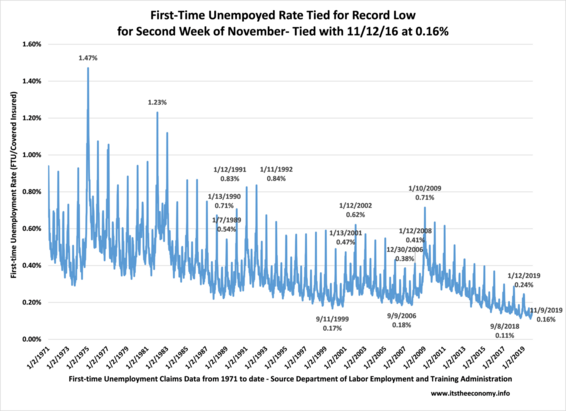 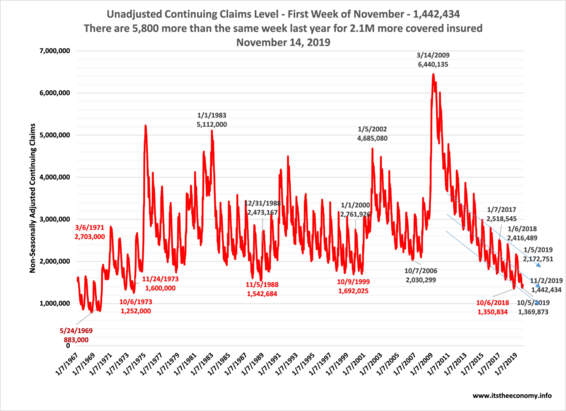