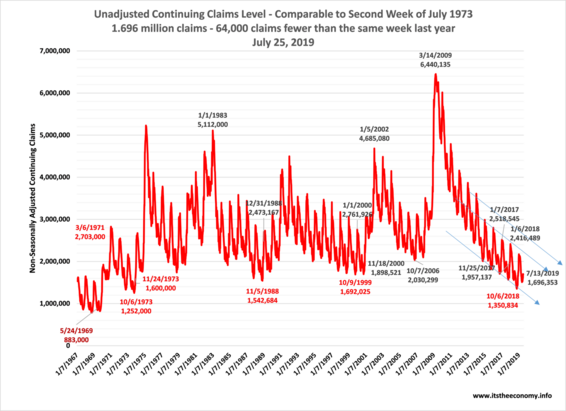 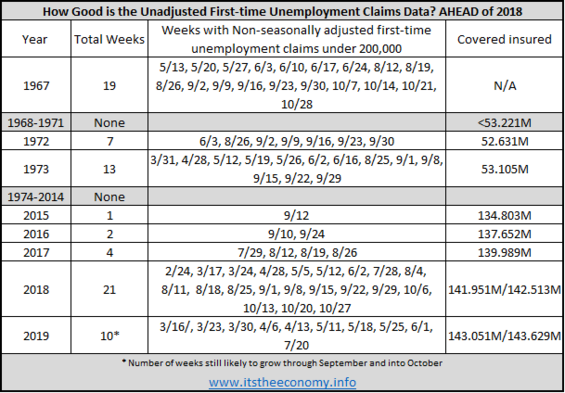 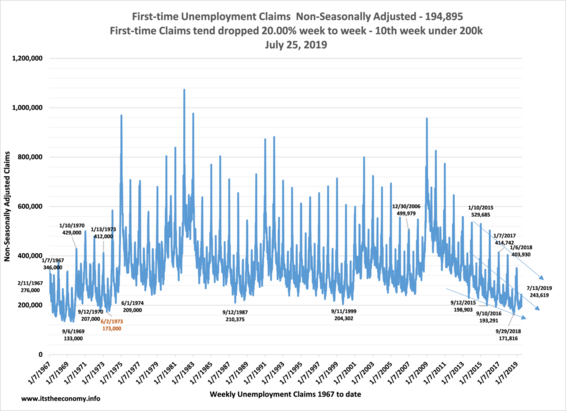 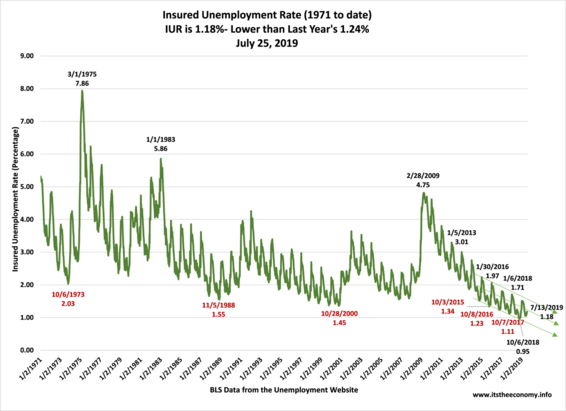 Continuing Claims should be hitting their Summer Peak this Week.

There was a time when the headline news was the weekly claims report that is released Thursdays at 8:30 AM eastern time. The headline number is the seasonally adjusted (SA) First-time Unemployment (FTU) Claims data. The data that should be receiving attention are the non-seasonally adjusted (NSA) FTU data, the NSA Continuing Claims (CC) data, and the NSA Insured Unemployment Rate data. NSA FTU claims tend to hit their summer peak during either the first or second week of July, and the continuing claims data peaks during the second week of July. Both generally trend lower from this time of the year through the end of September or the first week of October. What happened this week?

The seasonally adjusted continuing claims data dropped from 1.689 million claims to 1.676 million claims. The SA CC level could have been reported higher or lower than it was reported.

The non-seasonally adjusted Insured Unemployment Rate (IUR) stands at 1.18%. This is lower than the NSA IUR during the second week of July 2018 when it was 1.24%. It is also important because last October the IUR was just 0.95%. It was under 1.00%.

Continuing Claims could influence the U-3 Unemployment rate. This data is important because it was collected the week closest to the week that the Current Population Survey data on U-3 Unemployment is collected. The CPS data is used in the July Employment Situation Report, or Jobs Report.  The CPS data is one survey. The Current Employment Statistics (CES) data on workers and wages is another data set. The Weekly claims data is a third data set, The JOLTS Job Opening and Labor Turnover Survey data is a fourth data set. These data sets are measures, plural, or the economic conditions. They all have different sample sizes, they all measure different :things," and they all have different margins of error. The CES data is comparable to the JOLTS data, and different, as a red apple is to a Red Anjou Pear. The CPS unemployment data is comparable to, and different from, the weekly claims data, as a tomato is different from a pomegranate. You can make juice from all of these fruits (seeds on the inside,) but you will make very different adult beverages with these fruits. The NSA CC is up 170,000 from the mid-June level. The IUR is up from mid-June. Will people say they are put of work and looking for work or did new workers find work while existing workers lost jobs month to month?

The peak Summer month for jobs and Workers is July. We may exceed this level during the Christmas Hiring Season. Unemployment claims should fall from now through the end of September. We could challenge last ear's NSA FTU low and drop below 170,000 claims. We may see 21, 22, or 23 weeks where the NSA FTU claims are recorded under 200,000 claims this year. We should challenge last year's NSA CC low of 1.35 million and possibly drop below 1.28 million. The IUR should drop below 0.90%. All of this is being ignored.