First-time Unemployment Claims fell 5.35% to 208,782 claims. It was thought that the NSA FTU claims data could fall to between 197,000 and 215,000 claims.  We are seeing first-time claims come in 4,000 claims higher than last year for 2 million more covered insured. If the SA FTU claims data was population adjusted as well as "seasonally adjusted" then we would probable have a seasonally adjusted FTU below 200,000.

The Non-seasonally adjusted continuing claims data was recorded down 1.21% to 2.087 million claims. This is 106,000 claims lower than the same week last year. This is the lowest continue claims level, NSA or SA, for the first week of March since 1973.

The seasonally adjusted continuing claims was reported at 1.776 million claims. Normally a value under 2 million is considered good for SA CC. The 2 million mark is comparable to the 300,000 SA FTU claims value.

The Insured Unemployment Rate fell to 1.46%. You will hear that the "unemployment rate" is closer to 4%. The headline unemployment number includes those people who are not working who are looking for work. The IUR is the unemployment rate of the covered insured who recently were working. This is a huge difference. The current 1.46% IUR is lower than it was during the end of 2000 through 2014 and into 2015.  The IUR tends to fall through the end of October and into the first week of November. Last year we set an all-time NSA IUR record at 0.95%. Last year the rate was a reduction form 1.11% the prior October. This October could we drop below 0.90%? Could it hit 0.85%?

The weekly claims data is important. It is the most current data that we receive during a month. This data was collected March 9th for FTU claims and March 2 for continuing claims. Most data is collected and reported 3 weeks later. Next week's continuing claims data will give us an idea the direction that the U-3 unemployment data is heading. This data set is, again, entirely different from the CPS U-3 unemployment data. It only gives us an idea of where it is heading, not really how low it will fall. It is an indirect comparison. Things are still improving compared to last year. 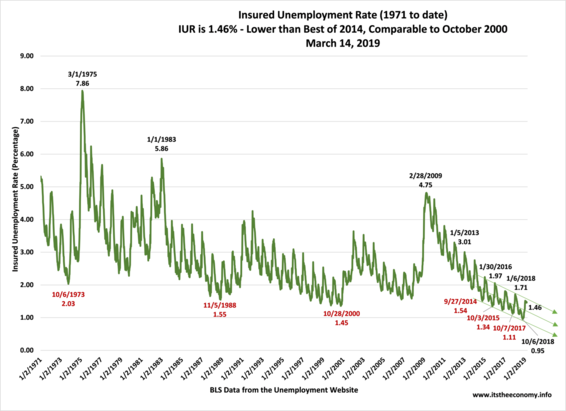 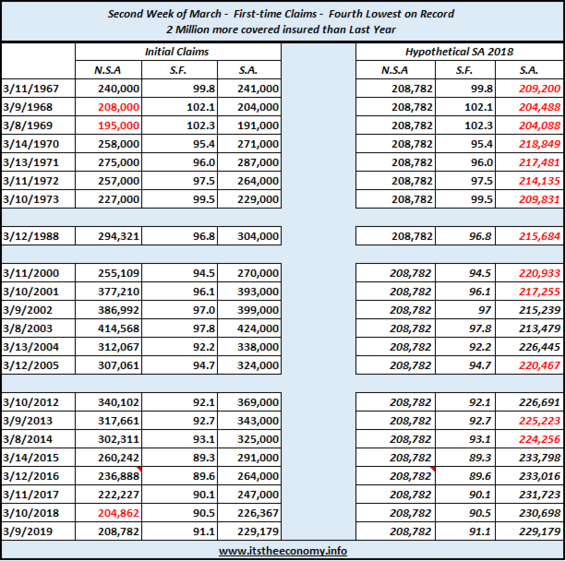 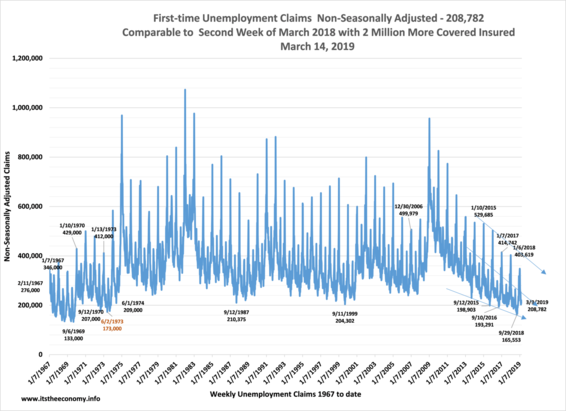