(Another Week, Another Record.)

The Non-seasonally adjusted first time unemployment claims was recorded at 198,140. This is reality. We have the most people in the workforce who are "covered insured" with respect to unemployment benefits. We have fewer first-time claims during the fourth week of October than we had last year when we had 2.1 million fewer covered insured. (198,140 vs 198,530)

The Seasonally Adjusted First-time claims data was reported at 218,000.  This number could have been reported as low as 211,000 claims. Remember 300,000 SA FTU claims was considered good during the Obama Administration. Remember their "FACT" about consecutive weeks under 300,0000 claims. That was a False Assertion Considered True (FACT.) It was an economic urban legend.  The True First-time Claims Streak Started After Thanksgiving 2016.

Continuing Claims recorded at 1.418 Million Claims.  Continuing Claims tend to increase from the second week of October through the first week of January. We had 2.172 million continuing claims during the first week of January - down from 2.41 million during January 6, 2018.Will we remain below 2.172 million this year or will the addition of 2.1 million more covered insured impact that number? Will record levels of multiple job holders provide the ultimate unemployment insurance and reduce the continuing claims level? (The ultimate form of unemployment insurance is a second job.)

The continuing claims data was "reported" at 1.690 million claims.  This is remarkable. It could have been reported as low as 1.641 million claims.  There are some in the media who if they report this piece of data they will lament the "FACT" that the SA CC value is higher this year than last year.  There were 35,000 more NSA CC for 2.1 million more covered insured. This is virtually a rounding error. Those people collecting unemployment benefits instead of a paycheck may not consider it a rounding error. Are any of these claims GM strike related?

How strong is the First-time Unemployment Claims Data?  The IUR is an official value published by the Department of Labor. If we create a First-time Unemployment Rate, or FUR, we can see that we have been at historic lows, non-seasonally adjusted. At the depth of the Great Recession, during January of 2010, nearly 1% of the people who were covered were applying for unemployment benefits (0.71%) This was identical to January 1990. There were larger spikes during 1975 and 1983. This October we dropped to 0.11%. The lowest we were prior to the Great recession was 0.18% during September of 2006. We may have to start following this rate rather than just focusing on the FTU claims rate because we could see spikes in unemployment claims that seem large and are actually negligible because of the size of the workforce. 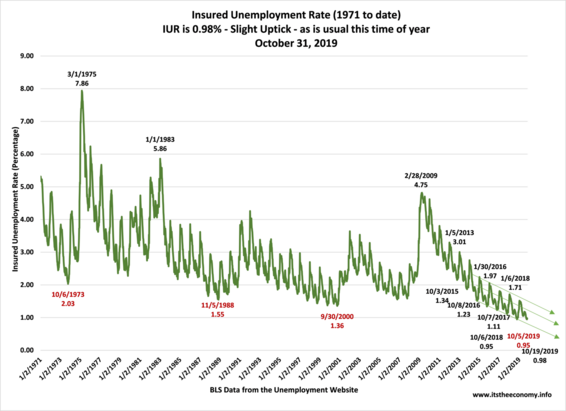 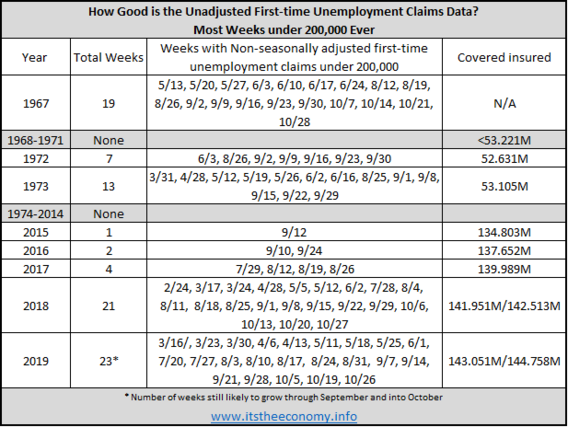 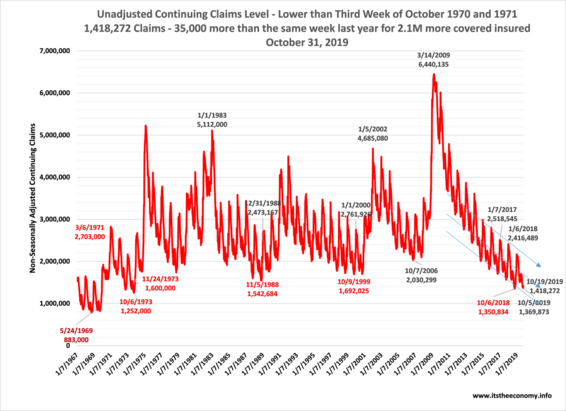 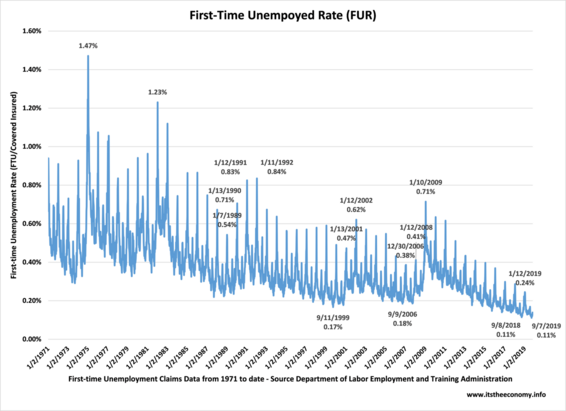 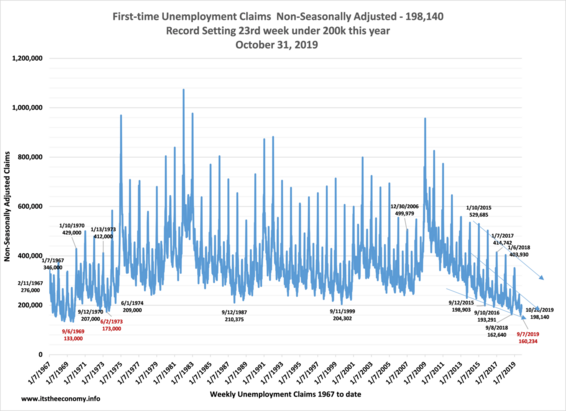