President Trump is off to the best start ever.

The February Jobs Report was Phenomenal. We saw a huge jump in both full-time jobs and part-time jobs this February. It was thought that the non-seasonally adjusted (NSA) Current Employment Statistics (CES) worker data could surge. It was though, based on the worker surge that we would see a jump in NSA Current Population Survey (CPS) Jobs. The February Jobs Forecast Article was expecting comparable job creation to February 2017. The February Jobs Report exceeded expectations. We recorded the largest February  jump in the NSA CES private sector worker number since 1980. This column has written numerous articles comparing President Obama to his predecessors in the "Four Presidents at __ Months" series. Now we are comparing President Trump to President Reagan, President Clinton, President George W. Bush and President Obama int e "Five Presidents at __ Months" series. So how is President Trump doing?

This was a fantastic jobs report. It will be interesting to see how this momentum is maintained.  The wage increase, non-seasonally adjusted was 2.9% for the entire private sector. The seasonally adjusted wage growth was reported at 2.6%, most likely due to a surge in the Leisure and Hospitality Sector.  President Trump has reduced the unemployment level by over 800,000 workers while boosting full-time employment by over 3 million. President Clinton dropped unemployment by almost the identical amount of workers while boosting part-time employment. The net boost in participants under President Trump, is better  than President Clinton, and is better than Presidents Reagan, Bush 43, and Obama combined.

Which sectors are doing the best. Are men finally going to break-out this year with more full-time jobs? While our graying workforce start retiring and making room for younger workers? We will see later this week. 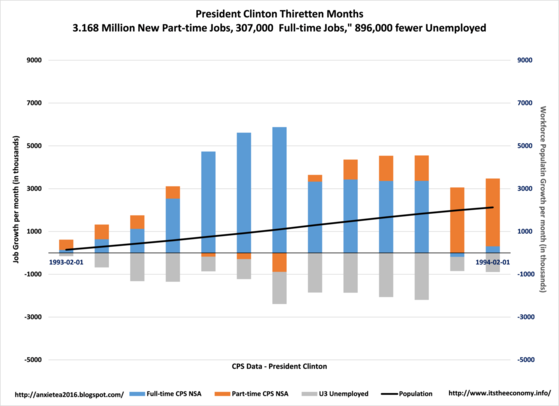 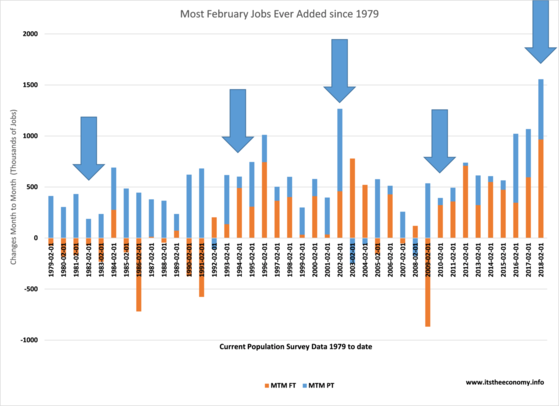 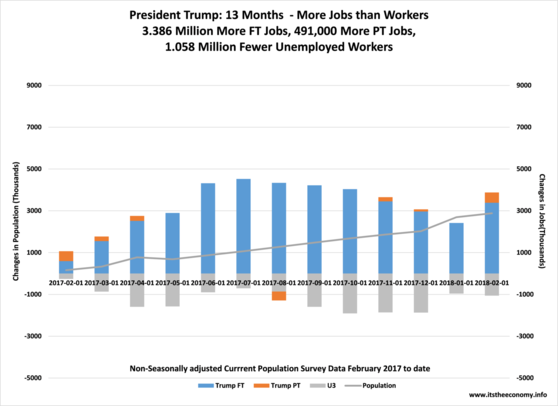