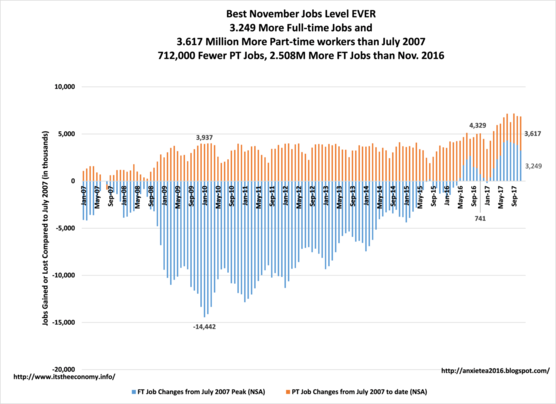 Sooner or Later the Media will Report on Good Economic News

Many of the articles written on this website were inspired by Internet memes. There was a meme that talked about how President Obama had created more jobs than any of his immediate predecessors. That did not seem right. There were comparing a one-term president, George HW Bush, two term Presidents Bill Clinton, President George W. Bush, with President Obama at 81 months. There are many things that could happen during fifteen months in office. The first "Four Presidents at __ Months" Article was a three-part series. President Obama was in fourth place for Job creation at that time. Participation eroded. It became evident that we had to compare the Presidents at the same point in their Presidencies. Now with President Trump the series is "Five Presidents at __ months."  Full-time jobs at at they highest levels for their respective months.  July was the best July ever - this is the peak employment month for the year. August 2017 was the best August. September was the best September, October and November can say the same thing. So how is President Trump doing compared to Presidents Reagan, Clinton, George W. Bush and Obama?

But Wait! Presidents Reagan, Clinton, Bush, and Obama started with lower starting points. If you are President Reagan add 16.6 million jobs over 8 years when you start while adding 16.5 million potential workers (FT, PT, Unemployed, or non-working adults)  that is different than adding 19 million jobs for 19.9 million potential workers (Clinton,) 4.2 million jobs for 21 million workers (Bush 43,) or ten million jobs for 19.3 million workers as President Obama did. Only President Reagan added more jobs than workers. When more workers are added than jobs the participation rate falters, unless unemployed workers rise. If you look at the growth rate of workers you will find a similar, not identical, pattern. President Clinton was growing jobs at nearly 5%. President Trump comes in second place as he approaches 4%. President Reagan comes in third place, President Bush fourth place, and President Obama in fifth. Will this growth rate be a proxy for GDP growth? Time will tell. 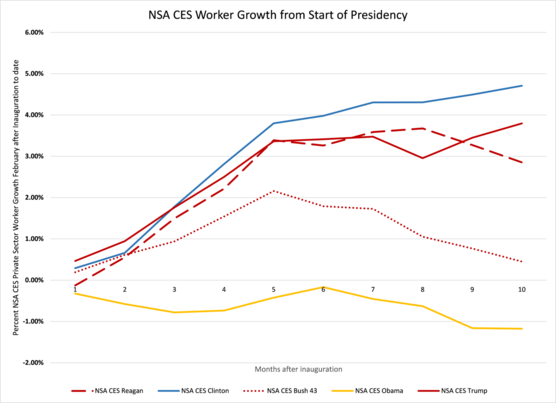 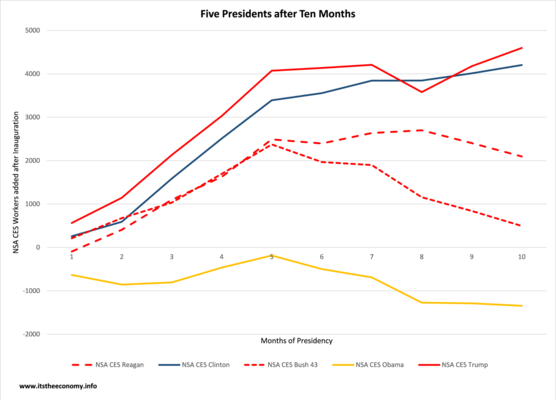