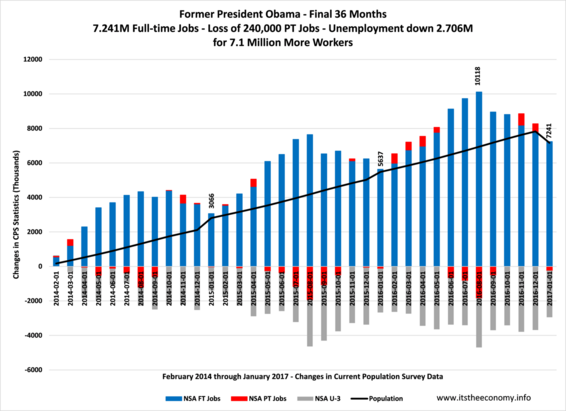 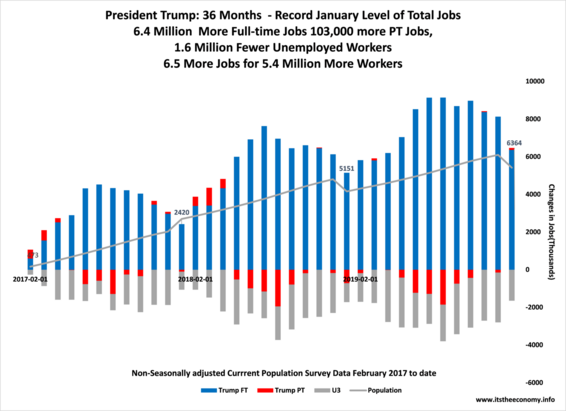 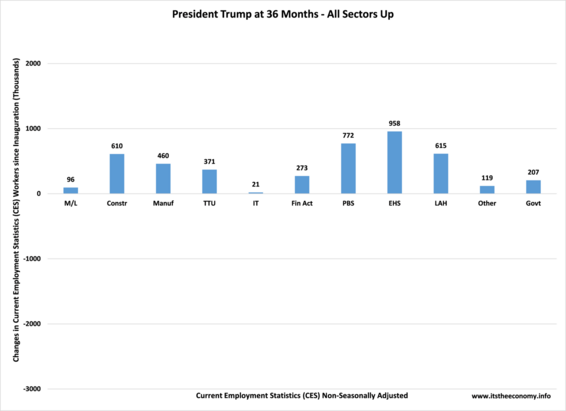 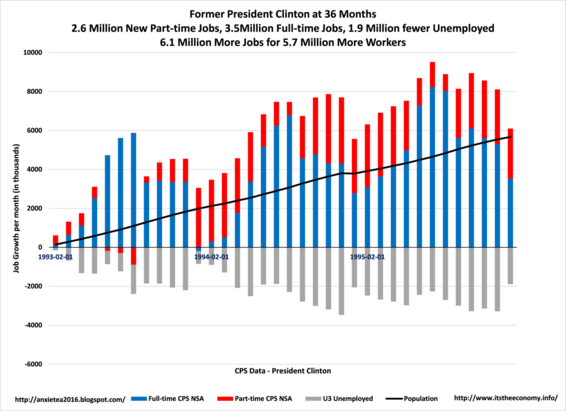 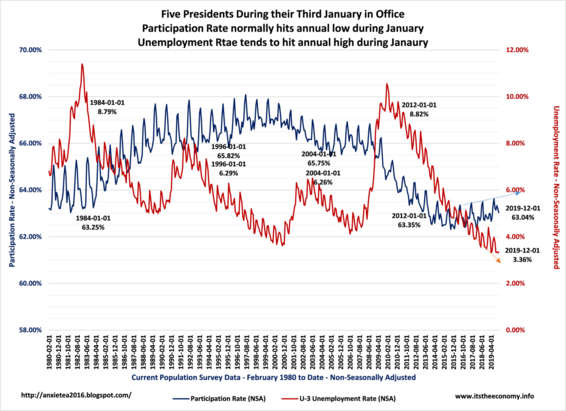 The January Jobs report is marked by the situation that we will have very different Non-Seasonally Adjusted (NSA) data and Seasonally Adjusted Data story-lines. There are two data sets that go into the jobs report, or employment situation report, and they measure different things. The Current Population Survey (CPS) jobs and unemployment data and the Current Employment Statistics (CES) workers and wages data. Normally January brings seasonally adjusted and non-seasonally adjusted data revisions for the CES data and only revisions to the seasonal factors, and therefore only the seasonally adjusted data. We were advised months ago that the seasonally adjusted CES data was going to be revised down for the CES data with downward revisions for both the Private Sector CES data and the Non-Farm Payroll (NFP) CES data.  We did not trim as many NSA CES workers as expected. How is President Trump doing when compared to former Presidents Reagan, Clinton, George W. Bush, and Obama?

The data looks quite remarkable. The headline Seasonally Adjusted CES worker data was up 206,000 private sector workers and 225,000 seasonally adjusted non-farm payroll positions. Unemployment, part of the CPS data set, was at it's lowest unemployment rate since January 1967. This was covered in "Jan. Jobs Report: Revisions and Remarkable Data." Seasonally adjusted workers were up in ten out of eleven sectors month to month. They were also up in tens sectors January to January. Every sector received a pay raise last year, January to January. This was covered in "Record January Wages and Worker Data." The thing is that the CES data is only half the story. The Current Population Survey (CPS) data and the CES data were out of sync last year. What happened this month?s f

President Trump has added 6.3 Million Full-time jobs during his first 36 months in office. January is traditionally a month where full-time jobs drop and part-time jobs rise, non-seasonally adjusted (NSA.) He has also added 103,000 part-time jobs and trimmed 1.6 million unemployed workers. The participation rate  is up and the unemployment rate is at a 43 year low for the month of January.

But what about the Current Employment Situation data? President Trump has seen all sectors add workers, non-seasonally adjusted, during his first 36 months in office. The largest gains, in number, have been recorded in EHS, PBS, LAH, Construction, and Manufacturing.