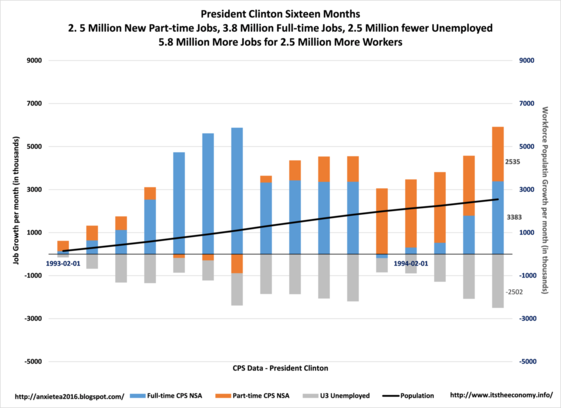 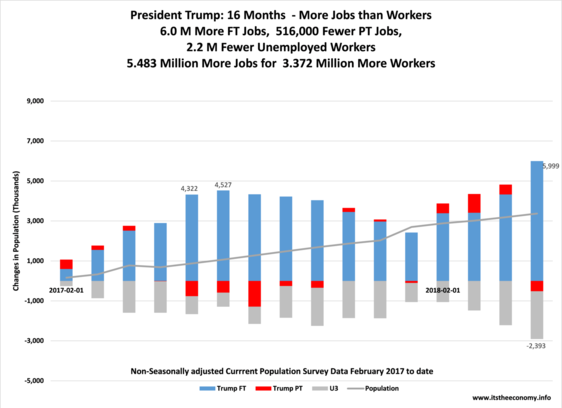 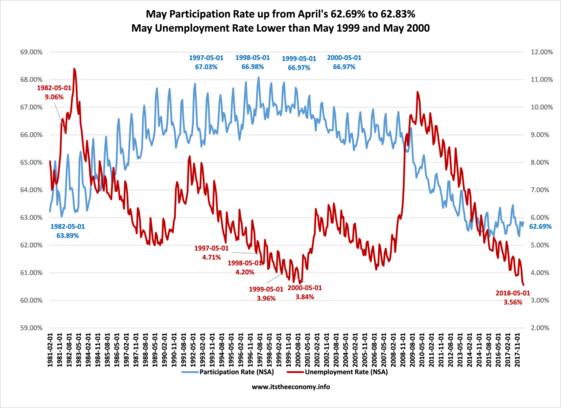 How is President Trump doing after sixteen months in office? We know from the May Jobs Report Articles "Seriously Strong Full-time Job Gains This Month" and  "May Wages Up, May Workers Up" we know that the numbers were really good, even historic. Was it a one time fluke? Was February a one-time fluke? The data says otherwise. There was an Internet Meme that President Obama was the most successful jobs President since Clinton that created the foundation for this series. Four Presidents at 81 Months displayed how at the same points in their Presidencies that President Obama was in fourth place for job creation compared to Presidents Reagan, Clinton, and George W Bush. President Obama moved up to third place by the time he left office. How is President Trump doing compared to those four Presidents.

Unemployment fell under Presidents Trump and Clinton. That drop in unemployed workers is a drop in participants. Unemployed workers are participants. The job creation of both President Clinton and Trump means that their participation rates are up from their predecessors final month in office. Presidents Bush and Obama saw their participation rate during month 16 at lower levels than when they took office. President Trump's Non-seasonally adjusted (NSA) U-3 Unemployment Rate was recorded as 3.56% and was being compared with data from May 1999 or May 2000 when President Clinton recorded a NSA U-3 unemployment rate of 3.96% and 3.84%. Is President Trump winning? Yes and no.

Full-time jobs are up. Unemployment is down. Participation is improving. We have had more jobs created than workers have been added to the workforce population. This is how Reagan and Clinton grew the economy and boosted participation.