The February Jobs report was a "Tale of Two Data Sets" with Strong Current Population (CPS) Jobs and Unemployment data and Weak Current Employment Statistics (CES) Worker Data reported. The March Jobs Report was similar and different in that it reported strong SA CES.  worker growth and recorded weak, negative, NSA CPS job growth. So far this column has produced two articles on the March Jobs Report: "March Jobs Report Rebound" and "March Worker and Wage Data: Up Remarkably." There are many more ways to examine the data, including how President Trump is doing compared to his two term predecessors.

The effective unemployment rate is 9.84%. We have millions of missing participants. These are people who are neither employed nor official unemployed. Examining that same table you will find that we are missing 10.7 million potential workers. If we had the same participation rate that we recorded during March of 2000, when the unemployment rate was near its historic low and the participation rate was near its historic high, we should have over 10 million more workers. Using this calculation, the worst U-7 Effective Unemployment rate during March was 13.36%.

Blame it on the Boomers or a different generation. There have been discussion in the media that he reason why the participation rate had been falling, past tense, was because Baby Boomers, those born between 1945 and 1964, were retiring. Some in the media became attached to the notion that 10,000 Baby Boomers a Day were retiring. The data they were referencing said that there were 10,000 Baby Boomers reaching 65 years of each day. That is a big difference. This column has another series similar to the "Five Presidents"series that has been called both the "Red, Gray and Blue" series and the "Our Aging Workforce Series." Last month's  "our Aging Workforce is Over Participating" or "Record Feb. Jobs for those over the age of 55" compared the participation rates for all age groups during February 2007, before the recession, and February 2019 you will find that those over 55 years old are participating at a higher rate now than they were at that time, as an age group. You will also find that, as an age group, those 16-19 and 20-24 years of age are not participating near the rate that they were during 2007.

President Trump is doing something only two other Presidents have done during their first 26 months in office, boost the participation rate. So far he is also doing something than former President Clinton achieved during the early years of his Presidency: Cut the unemployment level and boos full-time jobs. But what about the final two years of the Obama administration and the first two years of the Trump administration. Been there. Done that. President trump created a million more jobs. Former Presidents Obama, Bush, and Reagan were able to win re-election with weak jobs data. What is going to happen over the next year and six months? 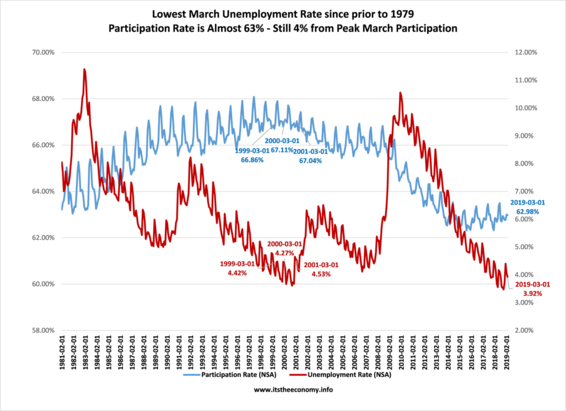 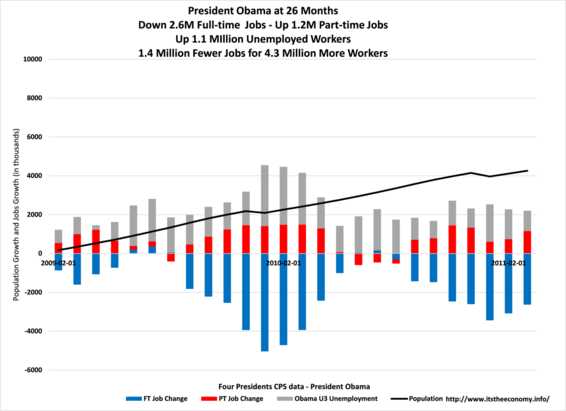 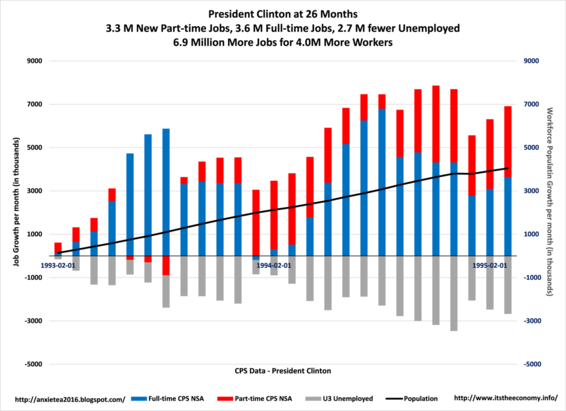 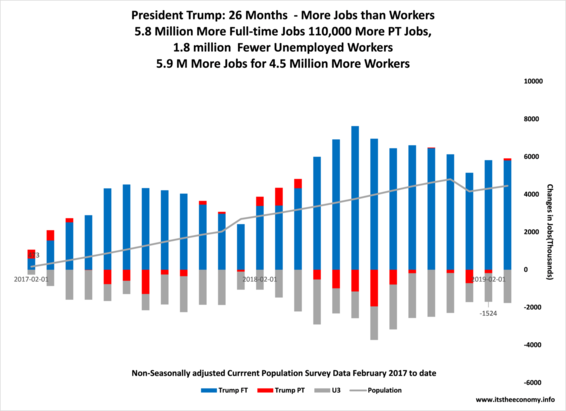