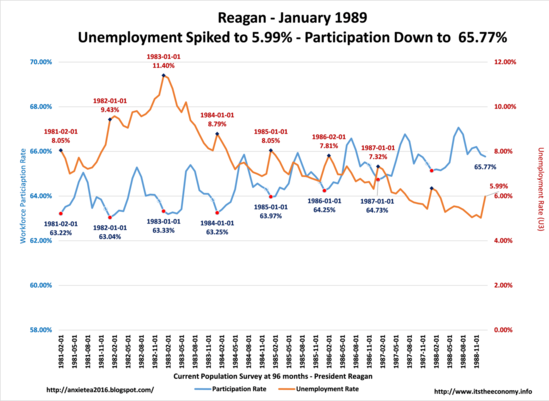 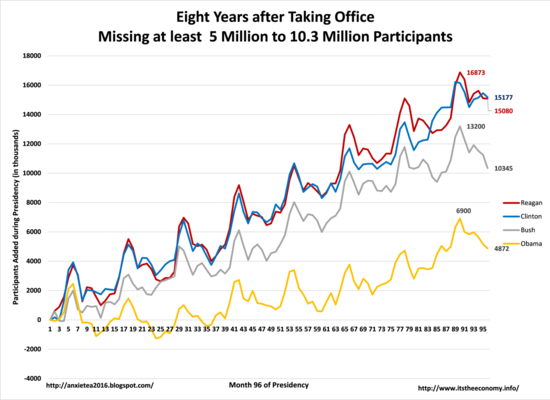 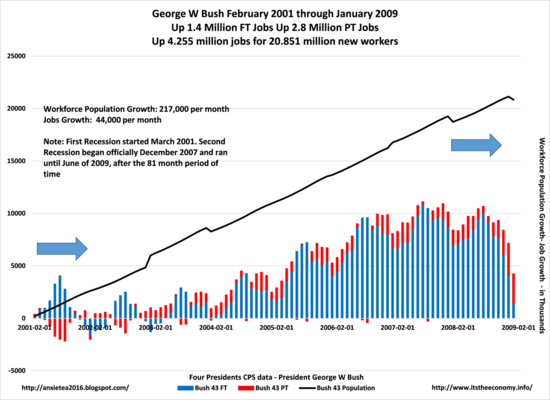 A Failure to Participate

Last week's Jobs Report was received to high praise. Was it President Trump's first jobs report? No. Was it President Obama.s final jobs report? Yes. Was it as good as they say it was? No. This column forecasted that the participation rate would be impacted by population changes. It was expected that the workforce population would grow at a rate comparable to the rate of growth for all of 2016. The workforce population was reduced by 660,000 people. This means that the non-seasonally adjusted participation rate improved even as we lost seasonally adjusted jobs, we lost non-seasonally adjusted jobs, and unemployment spiked.  This column questioned the job creation statistics "Era of the Meme." People were claiming that President Obama was the best Jobs President other than President Clinton. They forgot about President Reagan.

They also compared President Obama with 18 months remaining in office to Presidents who had finished their time in office. This column lead to a three part column "Four Presidents at 81 months" series of articles. This then evolved into a monthly series and created a template for calculating the effective unemployment rate. The effective unemployment rate, let's call it U-7 because the government has a U-1 through U-6, calculates the number of missing participants based on the current population and the official non-seasonally adjusted (NSA) participation rate. A participant is one who has a full-time job, a part-time job, or is unemployed. The participation rate is the fraction of the workforce population who is participating. Participation is obviously impacted by changes in population. Last month the workforce population was recorded at 20.003 million. This month the population dropped to 19.343 million. This drop, plus the increase in unemployed workers  of 979,000 workers,  offset the decrease in full-time workers of 716,0000 jobs and the decrease of 555,000 part-time jobs.

How do the Four two-term  Presidents Compare at the end of their terms, remembering that the data is collected up through the 12th of the Month.

President Obama has seen five consecutive months of dropping Full-time Employment. Total employment, part-time and full-time has dropped since October. President Obama added 10 million jobs for 19.3 million workers - this is part of the reason why he has the lowest participation rate at the time he left office of his three predecessors who were in office two terms. He added a paltry 105,000 jobs a month - far short of his 200,000 a month that was promoted  during the time "Era of the Meme" was written. You hear other people touting 15 million or more jobs created by President Obama. First, they are using seasonally adjusted data. Second, the are using the Current Employment Statistics data which measures workers, which double counts people working two jobs. Third, the number does not factor in the 5.038 million full-time jobs lost between February 2009 and January 2010.

President Clinton Was Shedding Jobs, Too. President Clinton hit peak employment during the Summer of 2000. Full-time jobs were being shed as the recession was beginning. The jobs recession preceded the Gross Domestic Product Recession. This is called Winter. Summer jobs are not present and  Summer Workers aren't working during the Winter. Even so, President Clinton almost added the same number of jobs per worker. He added 199,000 jobs a month for 96 months while adding 207,000 workers per month.This is why we need or want to see a "seasonally adjusted worker gain" of 200,000 workers a month. The seasonally adjusted data smooths out the peaks and valleys.

President Bush Had a low of 65.37% participation and a high of 8.48% unemployment at the end of his Presidency.  We had economic stability during the Bush years, relatively speaking, until the final months. The "Tech Bubble," "911," "Katrina," and "Ike" caused problems for President Bush We saw seasonal fluctuations in unemployment and participation. Every time we emerged better than when we entered the crisis until he had to leave office. 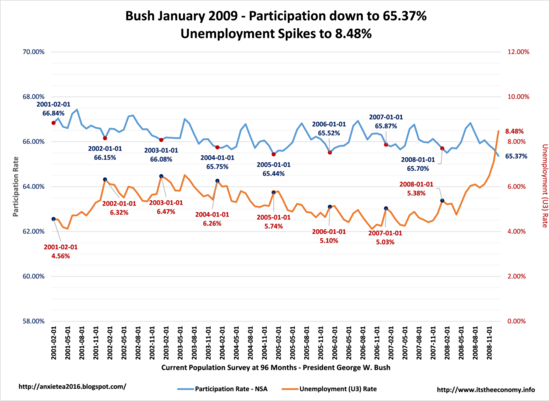 We have a U-7 Unemployment rate approaching 10%. This number differs from theU-6 number by the point that the U-7 excludes people working full-time and part-time jobs. The U-6 includes people who are working part-time jobs for economic reasons. The U-7 takes those people who have been added to the workforce population who do not have jobs and counts them as unemployed.  The Effective Unemployment rate could be reported as high as12.63%.

Future columns will look at the aging workforce, in the continuation of the "Red, Gray, and Blue" series. It will also examine the breakdown of the workforce by gender, male and female, in the "War on (wo)men Series." There was a war on women talking point during the elections of 2012 and 2016. The real war has been on men. Men are working fewer full-time jobs now than during the Summer of 2007. This column will also address the impacts on the workers in specific sectors. While the rest of the media is focusing on the topic du jour this column will continue to dig into the jobs report data. 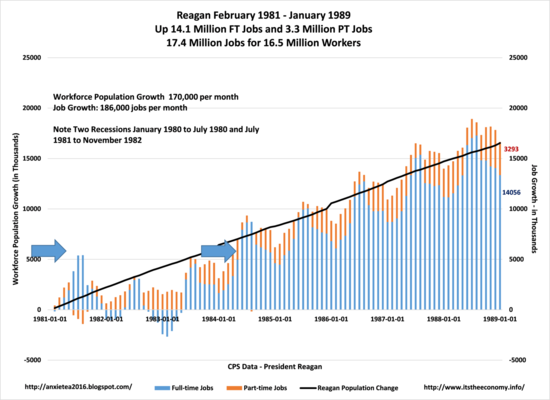 What happens if you compare the official unemployment rate with the official participation rates  at the end of each President's second term in office? Each President saw the number of full-time jobs increase while in office. Each saw part-time jobs increase while in office. Each saw the workforce population increase while they were in office. Comparing the achievements of the four Presidents means controlling the data as much as possible. How many more participants would we have if we had the Month 96 participation rates of Presidents Reagan, Clinton, or George W. Bush? We should have 7.4 million, 8.4 million, or 10.99 million more participants, unemployed or employed. If they are not employed then they are de facto unemployed. Some may have retired, some will say. The "Red, Gray, and Blue" columns have demonstrated otherwise. 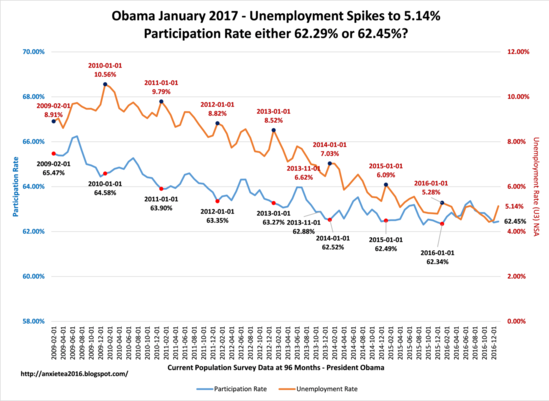 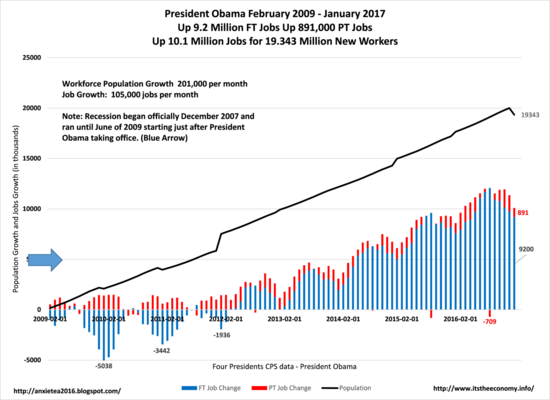 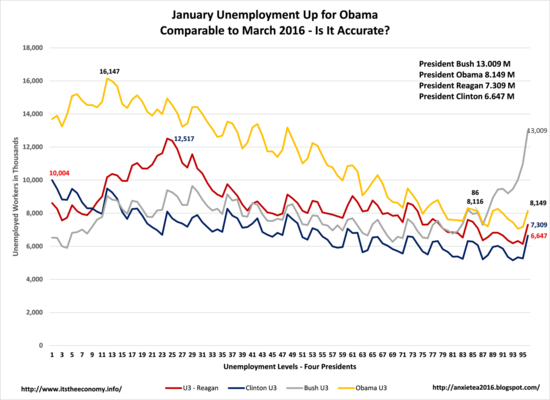 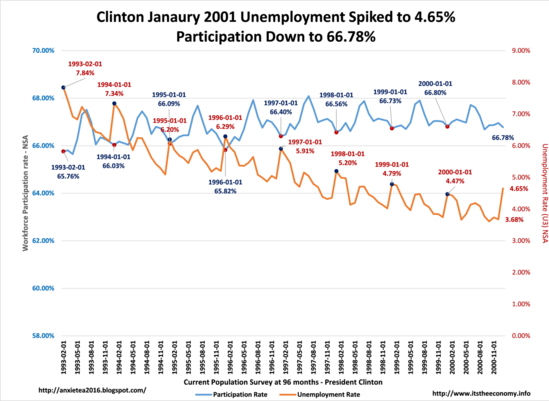 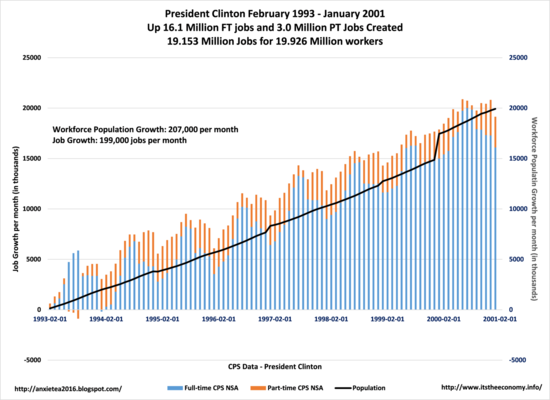