Fourth Quarter GDP was better than in recent years

What do the Annualized, Month to Month, And Annual GDP Numbers mean?

The government shutdown brought the release of some government data, including the quarterly Gross Domestic Product (GDP) data, to a grinding halt. Last month we received Advance Fourth Quarter GDP data, including the annualized, headline GDP, the same quarter GDP, and the Annual GDP. These three values paint different pictures. This month we are receiving the "final" fourth quarter, skipping directly from the advance value to the final value,m skipping the first revision. What was reported?

The "final" annual GDP went unchanged at  2.9%. There is a chorus in the media that the current growth period is going to come to an end during the immediate near future. Last your this column produced an article "MSM MAGA Recession Mania Misplaced" after the release of the third quarter GDP data. The GDP data, along with the new construction data, the jobs data, and the MARTS retail sales data were all pointing to a strengthening, not a weakening, economic data.

All of this data is revised every month, every quarter, and every year. There was some consternation and criticism of the Trump Administration for the end of the year data falling short of 3.0%. The best, advance GDP, end of the year GDP of  was recorded during 2000. It is important to note that the "final" annual GDP for 2015 was reported at 2.4% during the March 2016 Final fourth quarter report. This means, using that published data, that this was the best GDP since 2000 when it hit 4.1%. Readers of this column understand that the data was revised back to 1929 last year making all previous data "obsolete." That being said, President Obama's best year was 2.9%. His 2.9% was a GRP (Gross Revised Product) and not a true GDP. We may have to wait four years to find out what President Trump's final value is for 2018.

The Personal Consumption data does not make sense. We had 5% MARTS Retail growth, same month, during October, November, and December.  The seasonal factors may have had an impact on the GDP data. The problem is that there is not a "non-seasonally adjusted" form of the GDP data to examine. The economy is still growing. The downgrade to the 2018Q4 annualized data may mean that there is a lower base from which to jump to a higher level.  We could see quarter to quarter growth over 2.5%. Watch the revisions. Watch the underlying data. Going from the first report to the third report over a one month period may have "stripped the gears." 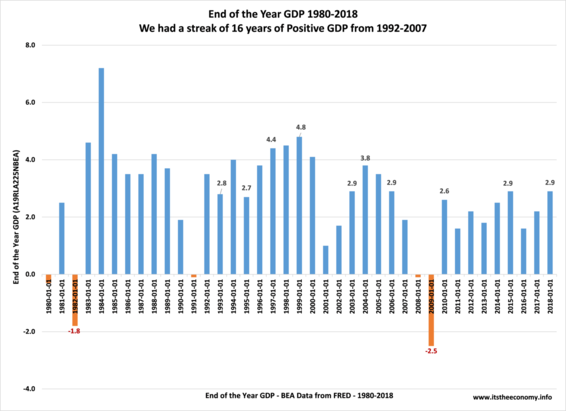 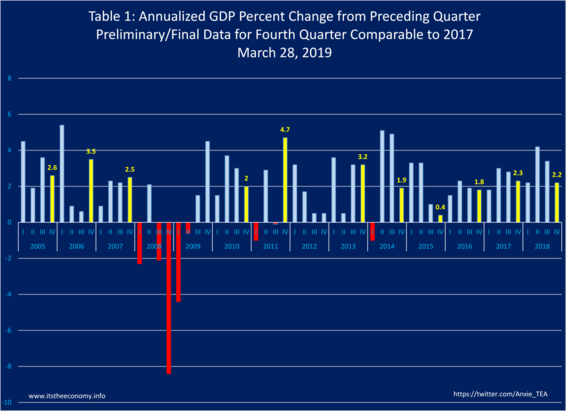 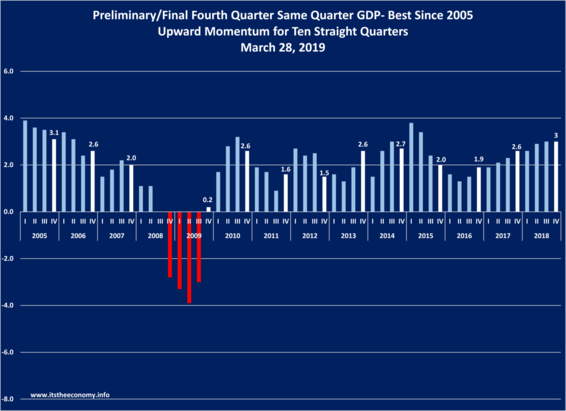