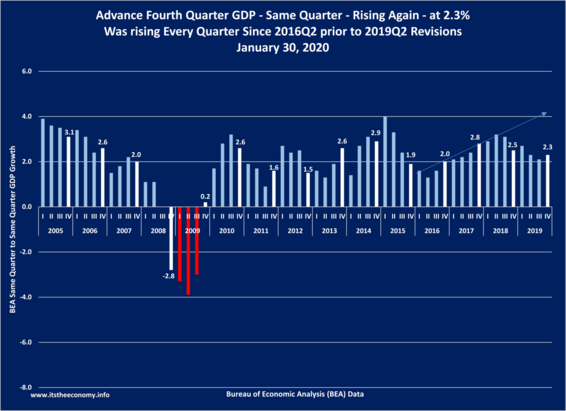 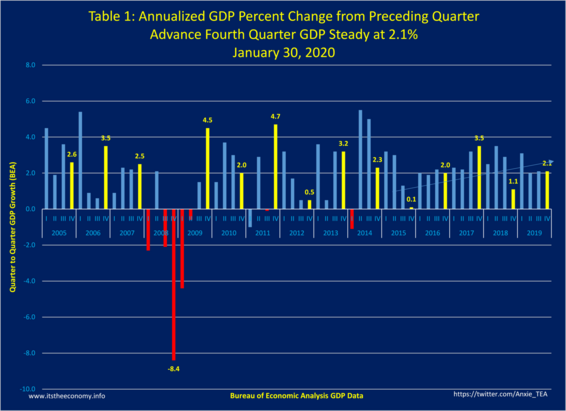 There are three Gross Domestic Product (GDP) number that will get attention this month: The Headline Annualized, quarter to quarter, GDP, the End of the year GDP, or annual GDP, and the ignored same quarter GDP Growth. Supposedly we have only had one quarter with annualized GDP growth over 3% this year. It is highly unlikely that we will report an end of year growth rate over 3.0% this year. The Schumer Shutdown at the beginning of the year threw a monkey wrench into the calculations.  The quarter to quarter GDP has been growing at or over 2.0% for 11 of the past 12 quarters. What can we expect? Same quarter growth was accelerating and over 3.5% until the annual revisions of the GDP data shifted growth from the Trump Administration back to the Obama Administration this Summer. Same quarter GDP has been over 2.0% since the fourth quarter of 2016. What was reported this quarter?

There are four main components to the GDP. The four main components are t. What can we expect this quarter?he Personal Consumption Expenditures (PCE,) Gross Private Domestic Investments (GPDI,) Government Consumption Expenditures (GCE) and the Import Export data. Sometimes we are firing on all four cylinders and sometime PCE is the cylinder that is firing. Common thinking is that PCE drive 60-70% of GDP. This could be very true during fourth quarter.

The Headline Annualized GDP was reported at 2.1%. This is the fourth straight quarter over 2.0%. Remember that first quarter last year was originally reported at 2.6% before the annual revisions this past Summer. PCE rose 2.1%, GPDI dropped 6.1%, Exports rose 1.4%, Imports dropped 8.7% and GCE rose by 2.7%

Last year we had an anemic 1.1% annualized GDP. Originally the annualized rate was 2.6%. This was after a second quarter with an annualized rate over 4% and a third quarter over 3%. This year same quarter GDP bounced up to 2.3%, didn't quite hit 2.5%. The annual rate of growth was modest at 2.3%. This is the "Advance" reading on GDP. Next Month we will receive the "preliminary" reading and the following month we will receive the "Final" fourth quarter GDP. We will have to watch the revisions from here on out.