People were thinking a 3.0% Fourth Quarter was Possible

Gross Domestic Product (GDP) is a rear facing economic indicator. The Advance Fourth Quarter GDP tells us the economic activity of October, November, and December of 2017. The Annualized GDP number is the hypothetical growth rate for the entire year based on one quarter. The Real GDP value is the growth during the past twelve months. The GDP is comprised of four major units: Personal Consumption Expenditures (PCE,) Gross Private Domestic Investments IGPDI,) Imports and Exports, and Government Spending. We just came off the best retail sales year ever. The end of year data for new home sales and existing home sales revealed that we had our best years since 2007. Housing is only a part of the GPDI picture. Non-residential Investments gave the GDP a pop last quarter. We have seen net exports of goods add to the GDP five of the past six quarters. Three percent growth for the annualized GDP rate for the fourth quarter may still be possible.

The Headline Annualized GDP Value was 2.6%. So what happened? What happened was that this fourth quarter value wasn't bouncing up from a value of 1.3% (2009,) or 0.8% (2011,) or 0.1% (2006.) The Annualized rate is the growth from a quarter that was already growing at over 3%. There was talk that this was going to be the first time in many years that we might have had three consecutive quarters with an annualized rate over 3%.

How do we have exports rising 13.9% quarter to quarter when the Table 3 data shows that Imports only grew at 4.8%? This is an Important distinction because when the contributions to GDP are calculated the impacts of impacts and exports are negative to the GDP. We have been a net import country "for forever."

Personal Consumption Expenditures "saved" the GDP. PCE contributed 2.58% to the 2.6% GDP. GPDI added 0.6%. Government added 0.5%. Somehow the import disparity subtracted 1.13% from the GDP. How is this Possible? Exports grew 9.2% during 2014q2 and exports grew 10.2%. What boosted GDP that quarter was Gross Private Domestic Investments (GPDI) GPDI dropped 1.3% during 2014Q5 and dropped 6.2% 2015q4.  Will the PCE be revised higher after the preliminary fourth quarter MARTS retail sales numbers are released next month? What about after the final MARTS data is released. We know that the growth rate for retail sales for the entire year was 7.86%. The growth in MARTS retail sales from third quarter to fourth quarter was 13.16%. The growth in MARTS from fourth quarter to fourth quarter was 14.67% How can PCE only grow by 3.8%

Look on the bright side. We are seeing consistent growth in the GDP. We will see the retail data revised twice and the GDP revised twice. If the PCE value is contributing "all" of the growth in the annualized GDP then this data could be revised up quite significantly. 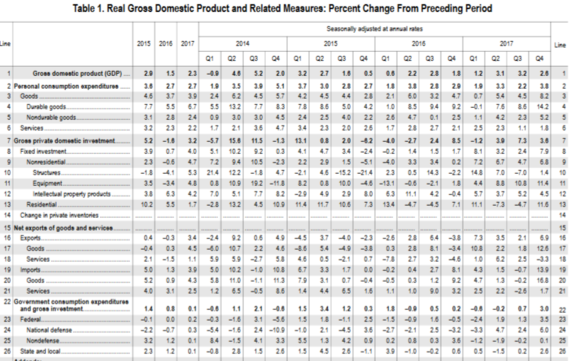 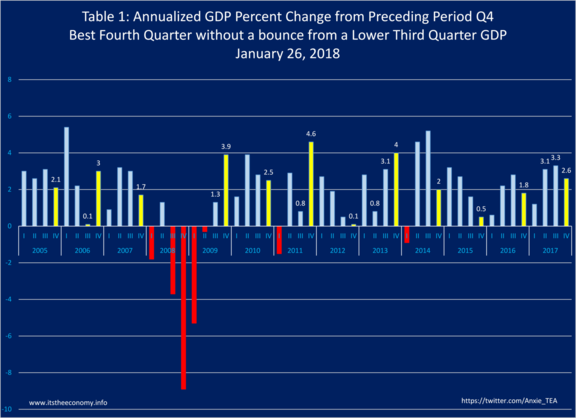 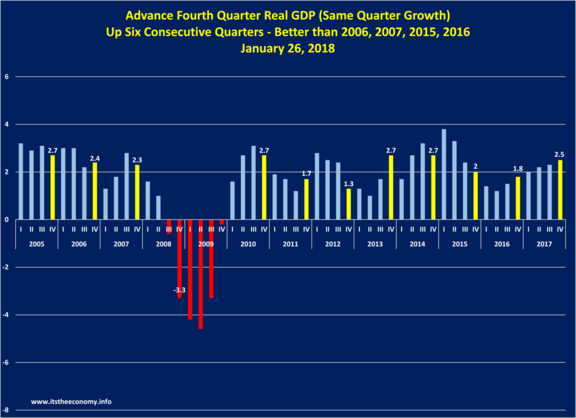