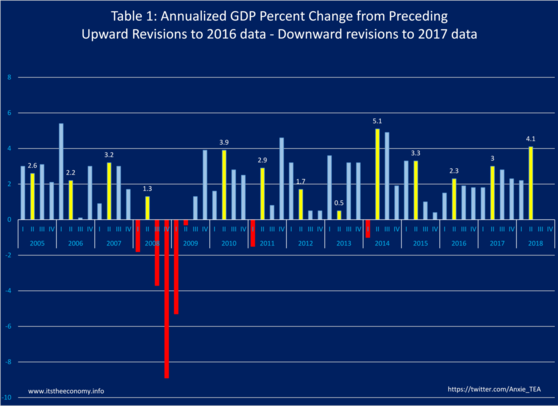 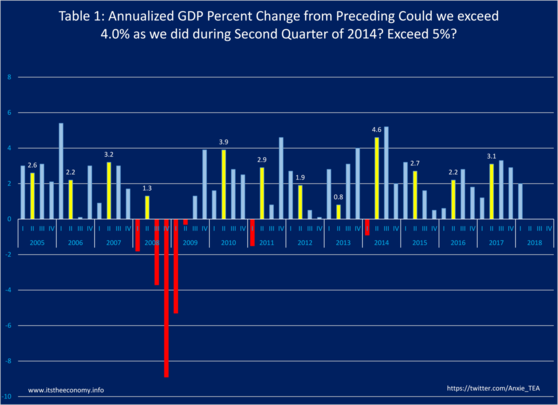 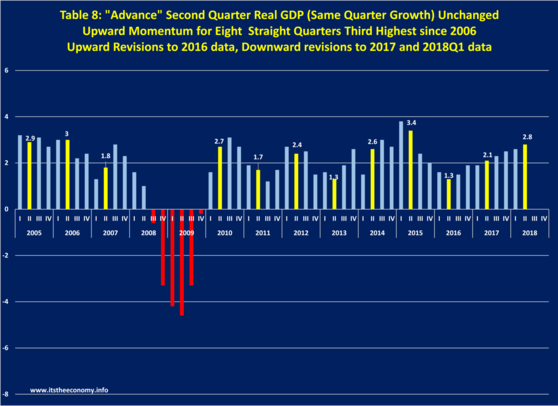 How are we doing compared to the Second Quarter GDP from last year?  There is a second GDP value that hardly receives any attention, the same quarter growth data. There can be considerable volatility in the quarter to quarter data. Someone could spend a huge amount time, energy, and money researching the changes from 1929 through 2017. What is interesting in the published data is that this data also saw upward revisions to the 2016 data and downward revisions to the 2017 data. We still have  eight months of improving data. The notable changes are that the 2016Q2 data is not as low as it was just last month, and the data for the  first, second, and fourth quarters of 2017 were revised lower. Is there politics involved with the GDP reporting of data?

This data was also supposedly revised back to 1929. How can we get insight from data that is nearly 90 years old? How can we revise data that is nearly 90 years old? What is apparent from the revisions to the annualized data and the same quarter data is that President Obama had a "better" final year in office and President Trump had a "worse" first year in office than was originally reported. The changes to the data are subtle. Changes to prior data impacts the growth during the most recent quarters. AS always, watch the data, watch the growth rates, and watch the revisions.

This was a solid GDP report. The trailing data, the same quarter data, is showing constant improvement. It was thought that we would break the 3.0% barrier this quarter. We have two more revisions and an annual revision or seven to get there. The annualized, quarter to quarter data, was expected to grow between 4.0% and 4.5%. The official value was 4.1% even after the data from 2018Q1 was revised from 2.0% to 2.2%. This upward revision "borrowed" some growth from the 2018Q2 data. Was it 4.3%? Will the data be revised higher next month? Time will tell.

Gross Domestic Product growth has been erratic since 2005. The headline value, the annualized "What If" value has struggled to stay above the 3.0% level. This value is the rate of growth we would see during a year if the economy grew at the same pace for four consecutive quarters.  We have achieved four consecutive quarters above 2.0% as of last quarter. this was the first time we had done that since 2005. The early data was pointing toward a seriously strong GDP number based on strong retail sales, strong Gross Private Domestic Investment numbers, solid durable goods data, improving export data, and even higher government spending. The GDP forecast article expressed some concern that a slightly lower level of federal government spending during Q2 as compared to Q1 could drag down the GDP number. The government does not publish "seasonally adjusted " outlays when the monthly Treasury report is released.

Headline Number of 4.1%. We have had five quarters of headline growth over 2.0%. Even after the downward revisions to the data for the second, third, and fourth quarters of 2017, the data was at 3.0%, 2.8%, and 2.3%. This quarter we logged a rate of 4.1%, which fell between the 4.0% and 4.5% range projected by this column. Last month the headline number was originally published at 2.0% with Personal Consumption Expenditures (PCE) increasing by 0.9%. The 2018Q1 PCE value was revised LOWER to a growth rate of 0.5%. This does not make sense based on the seasonally adjusted MARTS data. The Gross Private Domestic Investment (GPDI) data was revised up from 7.5% to 9.5%. The exports data was unchanged at 3.6%. Imports were revised up from 3.0% to 3.2%. Government Consumption Expenditures (GCE) was revised higher from 1.3% to 1.5%. (2018Q2 Advance GDP Report can be found here.)(2018Q1 Final revisions can be found here.)

The four components this month were firing on all cylinders.  PCE was at 4.0%. GPDI was supposedly at a negative 0.5%.That doesn't make any sense based on durable good and the "value in place" data. This will be revised higher. Exports were up 9.3% while imports were up 9.5%. Government spending was up 2.1% Even though imports exceeded exports, and even though the advance number for GPDI was negative, this was solid data. We almost always have one quarter, per year, of negative GPDI. Last quarter we grew at 9.6%. a drop should have been foreseen.

The revisions went back to 1929? The revisions , by quarter, were only published back to 2012. They revised all the data? Let that thought be absorbed. 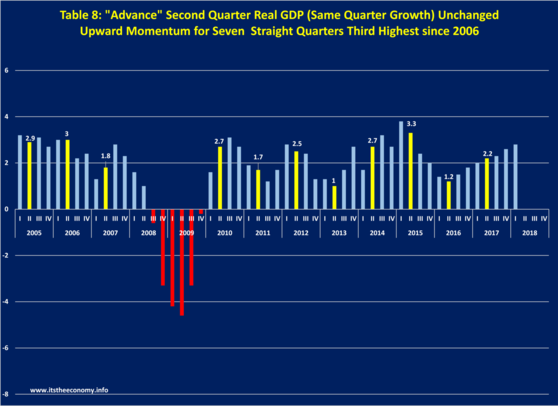