Elections Have Consequences - When the Swamp Controls the Data

The Second Quarter GDP data was better than what some of the "experts" had projected. This column produced a forecast article that offered a 4.0% to 4.5% quarter to quarter annualized, seasonally adjusted, growth rate as a possibility.  The question were what kind of revisions could we expect from the previously reported data. Would the retail sales data be revised to reflect reality? Would government spending be seasonally adjusted to be a positive? Would the uptick in durable goods and new home construction be reflected in the GPDI (Gross Private Domestic Investment) data? How would the strengthening Import and Export Data be reported? Little did we know that the GDP data would be revised back to 1929. The data was not just revised back to 2009 and the Great Recession, it was revised back to 1929 and the Great Depression. The pundits who were prepared to discuss the current data were not prepared for the massive revisions. They also were not prepared to discuss a 4.1% growth rate after an upward revision to the first quarter GDP.

What is missing is the discussion that there were significant revisions to the data. That doesn't mean that some of these organization, or other organizations, are discarding the report and moving on to the drama of the Day:

Maybe they saw my tweet on Friday. Maybe they read this past Friday's Article "Giddy GDP Data."

The Data from 2016 was revised higher, the data from 2017 was revised lower. This was noted in the "Giddy GDP Data" article. Something happened during 2016. I think it was called a Presidential Election. The economy was slowing. The stock market wasn't growing. The upward revisions for 2016 meant that the same quarter data for 2017 would show weakness.  We have seen this revision to history with the Current Employment Statistics data and the MARTS retail sales data.

The Great Recession did not last as long as we were told? A recession is consider two consecutive quarters of negative GDP.  The data, prior to the most recent revisions, revealed that the same quarter growth was negative from 2008Q3 through 2009Q4, or six full quarters:

The Trump Bump wasn't as good as we thought. The same quarter data for the period after 2015 were revised in a mysterious way:

This column, in the forecast article, projected that the "Table 8" Same Quarter Growth could have eclipsed 3.0%. The rate stagnated at 2.8%.

What is a person supposed to do? This column writes forecast article. It has taken screenshots of data and posted that data when reports are released. Almost all data has an advance value, a preliminary value, and a "final" value. Job and worker data is revised. Retail sales data is revised. Weekly unemployment claims data is revised. Seasonal factors are revised. This column often comments on the non-seasonally adjusted data because the seasonal factors used to convert the non-seasonally adjusted data to the seasonally adjusted data changes from reporting period to reporting period and from year to year for the same reporting period. There was a question asked by this author as to whether when the GDP revisions were released would he suddenly have a 3.0% annual rate of growth? It hasn't happened, yet. There is always next year and the annual revision. 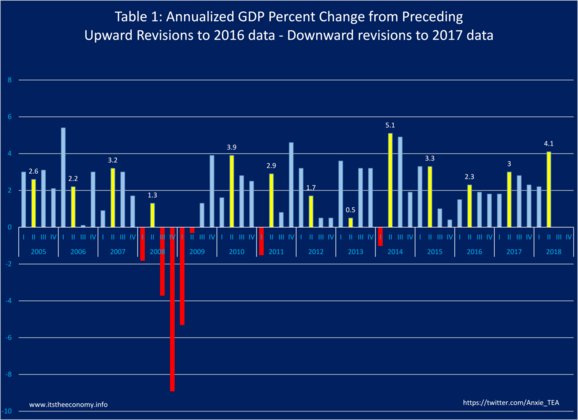 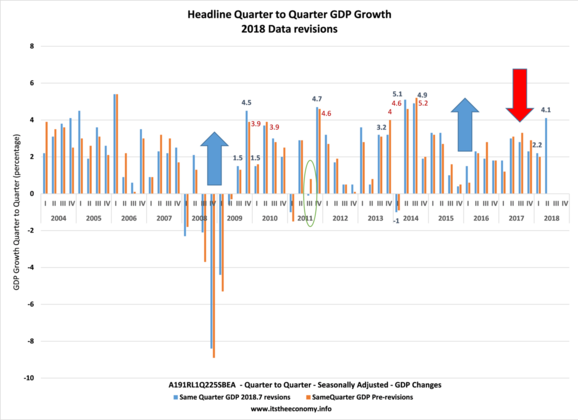 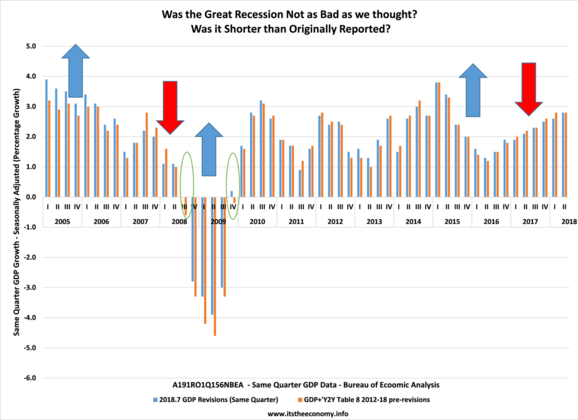 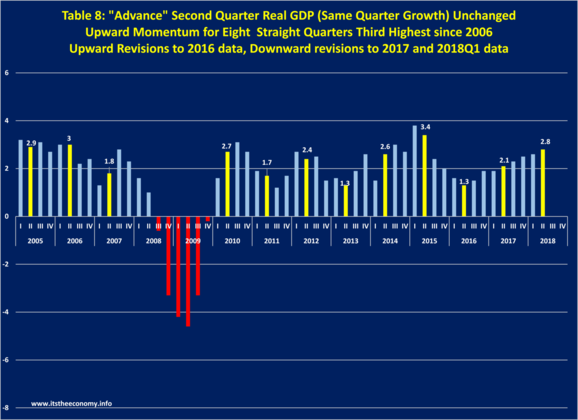