The weekly unemployment claims report used to be headline news at the bottom of the eight o'clock hour during the Obama Administration. Would the seasonally adjusted (SA) first-time claims (FTU) level drop below 500,000 or 400,000 or 300,000? The current under 300,000 SA FTU streak began on March 17, 2015. It ended this week is historic style.  We have had two elections and two leap years in the meantime. They stopped mentioning the "streak" after the 2016 Presidential Election. They rarely acknowledge the continuing claims data. They have "never" commented on the Insured Unemployment Rate (IUR.)What was recorded this week?  And what were they expecting?

The report started with a disclaimer that is normally reserved for times where Hurricanes impact the Unemployment Claims data.

This says a lot about what is happening. This was a systematic, state by state, shutdown of "non-essential" industries and businesses. This was unprecedented between January 1967 and march 2020.

Non-Seasonally Adjusted First-time Claims were recorded at 2.898 million workers. There is no way to sugarcoat this data. It was ugly. Early estimates were for 1 million, 2 million, 3 million, and even 4 million

This may, or may not, be one of the worst periods of time for first-time claims ever recorded during the past 53 years. I stress "May Not."

The Seasonally Adjusted First-time Claims Streak has now ended at 262 consecutive weeks. The only good thing about this is that the seasonally adjusted value of 3.283 million could have been reported lower than it was reported. The "unrounded" number was 3,282,503.  If prior seasonal factors for the third week of March were used the headline value could have been reported between 3.047M and 3.320M claims.

The Good News is that next week the Insured Unemployment Rate (IUR) Should only reach 3.44%. This may sound good considering that the U-3 Unemployment rate has been under 4.00% recently. It does not sound so great if you know that the NSA IUR has been under 2.00% since January 30, 2016.  To place this in perspective lets look at the next worst peaks.

We may challenge the 5%, 6%, and 7% IUR levels in the upcoming weeks. The good news is that this was created by a virus and viruses eventually die off.

This data had been so good that it "had" to be ignored.  Now the media will finally report on the first-time claims data because its is so "bad." .There were pundits talking about the three things that had to happen in order for President Obama to win re-election during 2012. First, the Seasonally Adjusted Weekly Claims level had to drop below 400,000 claims. We had 363,000 SA FTU (Oct. 27) and 361,000 claims (Nov. 3,) only to pop to 446,000 SA FTU claims on Nov. 10, 2016, Second, the SA Unemployment rate had to drop under 8.00%. Amazingly, the SA U-3 Unemployment rate dropped from  8.1% during August of 2012 to 7.8% during September of 2012. What wasn't being discussed back then was that the participation rate was dropping, too. The participation rate dropped from 64.0% during December 2011 to 63.6% during September 2016. The third thing that "had to happen" for former President Obama to be re-elected was to have gasoline drop below $3.00 a gallon.  This report was hyped as being bad while dismissing its relevance.

Will the Seasonally Adjusted First-time Claims level drop below 400,000 by November? The President is hoping to get the economy back on-line by Easter Sunday, April 12th. People will need to get back to work before Maundy Thursday, April 9th. The collection date for weekly claims that week is April 11th.

Will gasoline stay below $3 a gallon? Currently gas is below $2 a gallon and at 1.699 at a local station outside of Toledo.

Will the Unemployment Rate remain below 8%? This is a tricky question. The brunt of the nationwide shutdowns happened after March 12th, the collection date for the March Jobs Report. We may not report a spike when the March Report is released.  If people start recalling workers by the 9th of April then the April Jobs Report may not report a massive spike.The only place that this may be recorded is in the newspapers and the weekly claims data.

There are even people in the media who are asking if we should ignore the economic data. A newsperson whom I respected actually asked this question this morning. What should make this week any different from the past month? We have either been "All impeachment, all the time" or "All Wuhan Virus, All the Time" since the first of the year. They ignored, or dismissed,  thestrong Retail Sales datareleased this week. They ignored/dismissed the strong New Home Starts data. They even dismissed this month's February Jobs Report as being a "lagging indicator." They ignored the February Existing home Sales data, the best since February 2007. They ignored the February New Home Sales data, best since 2007, as BC, before coronavirus.

Right now all three ingredients are in place for President Trump to be re-elected. Seasonally adjusted First-time Unemployment Claims were under 300,000. Heck, they were almost under 200,000 claims two weeks ago. The unemployment rate is not only under 8%, it is under 7%, under 6%, under 5% and under 4%. Gasoline in Ohio is right around the $1.699 a gallon level.

The First-time Unemployment claims data was finally bad enough to be reported.  Ignore the weekly claims data at your own risk.  Last year we had 23 weeks with non-seasonally adjusted first-time claims of fewer than 200,000 claims.  We almost had our second week this year this week. Last year we tied a record low IUR of 0.95%. Last year we had a low of 1.369 million continuing claims, comparable to the 1.350 million during October of 2018, with 2 million more covered insured.The earliest that we have had an NSA FTU recorded under 200,000 was February 24, 2018. Last year, during the month of April, we had two weeks with SA FTU under 200,000 claims.

What can we expect? Expect the Legacy Media to actively ignore the good news and focus on the Wuhan Virus as long as they can. They needed their Black Swan. They have their Black Swan. Fortunately, we have a Black Swan Hunter named Donald J. Trump as President. One weapon of choice may be Chloroquine. 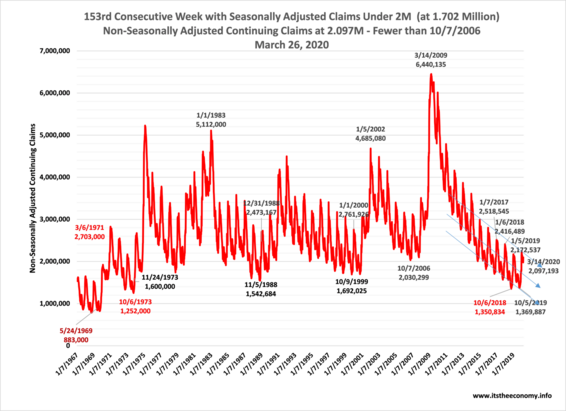 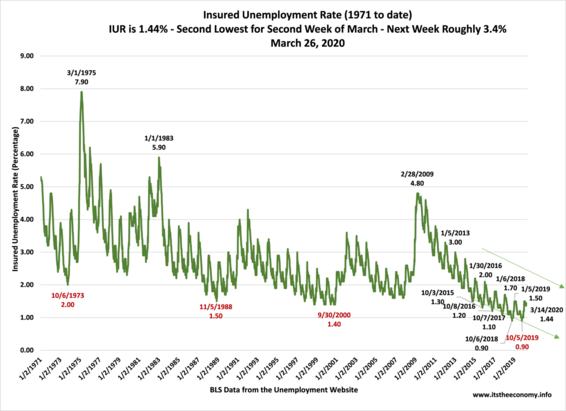 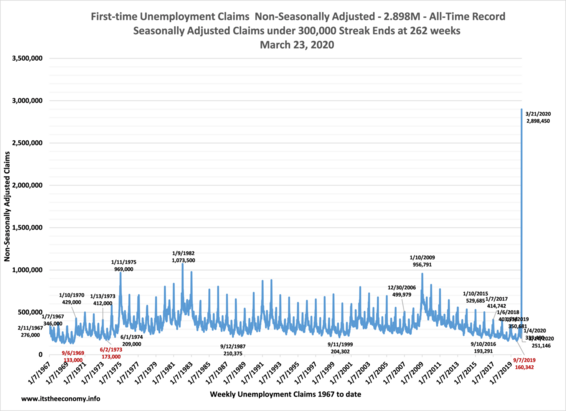 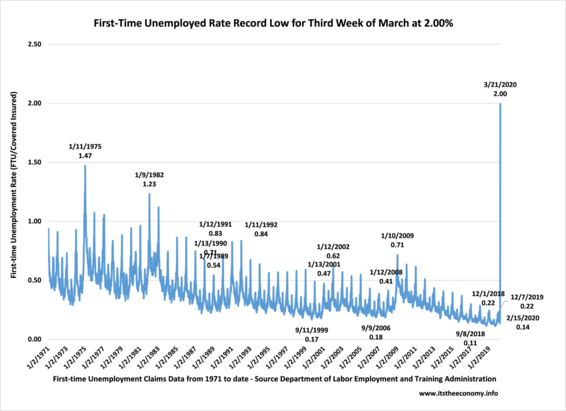