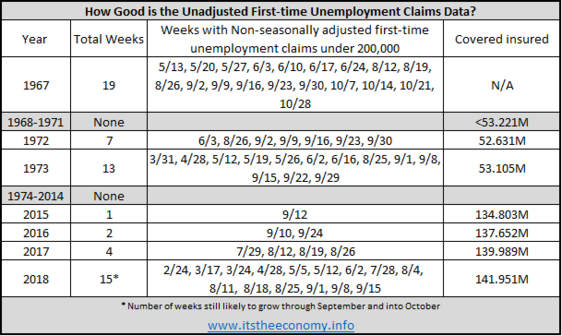 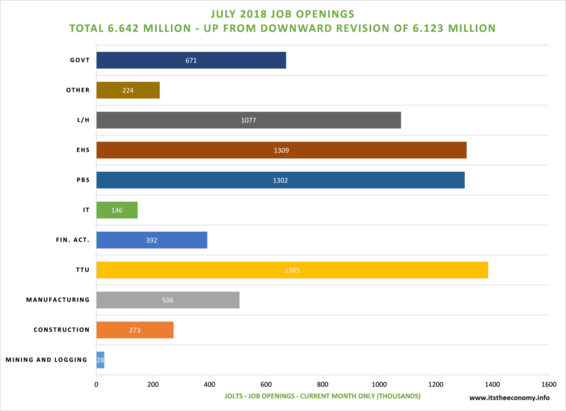 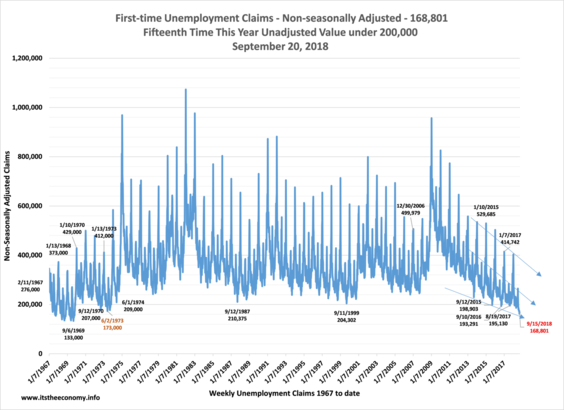 Unemployment Limbo: How Low Can We Go?

A Mainstay of this website, and its parallel site "Reclaiming Common Sense," has been covering the weekly unemployment claims report. The prior administration touted FACTS (False Assertions Considered to be True) regarding the weekly unemployment claims data. There was active manipulation of the seasonal factors that were used to convert the non-seasonally adjusted (NSA) first-time unemployment (FTU) claims data to the seasonally adjusted (SA) FTU in order to maintain a"unemployment claims streak." The "consecutive weeks with seasonally adjusted first-time unemployment claims under 300,000 claims" is an economic urban legend. The streak did not begin when they say that it did, and the streak ended multiple times, including Thanksgiving of 2016. What is true is that there have been fifteen weeks this year where we have recorded the NSA FTU under 200,000 claims, with a "2." This is very different from over 100 weeks of SA FTU under 300,000 claims, with a "3." There is also a measure of continuing claims data that is doing exceptionally well this year, as well.  This column has published a prior article of this subject titled "Just How Good Is the Unemployment Claims Data?"This will take another look at other pieces of unemployment data that are often ignored.

Do not conflate Unemployment Data  with Job Openings Data. There are many people who attempt to conflate the continuing claims level with the U-3 unemployment level, with the JOLTS (Job Opening and labor Turnover Survey) jobs openings data. These are three different surveys, the weekly claims data, the Current Population Survey of unemployed workers, and the JOLTS data. These surveys measure different classifications of workers, are taken at different times, have different sample sizes, and different margins of errors. It is as if you are comparing an apple with a pomegranate, and a strawberry. All are red. All are fruits, except one is a drupe.l

We have 1% of the covered insured claiming benefits. There was a thought of titling this article "1% Unemployment rate?"  readers of this column understand that the official unemployment rate is under 4% and the unofficial unemployment rate is closer to 8% because we have "missing participants." These participants are calculated in the workforce population. These missing participants are neither employed (with full-time or part-time jobs,) nor are they unemployed, according to the CPS data. The participation rate is calculated by combining the number of full-time jobs, part-time jobs, and unemployed workers and dividing that total by the number of people in the workforce population. All of this data is CPS data. If you divide the current level of continuing claims, 1.463 million NSA continuing Claims, by the number of covered insured, 141 9 million  the non-seasonally adjusted Insured Unemployment Rate is 1.03%, which was rounded down to 1.0%. We have never had an NSA IUR of 1.0% during the nearly 51 year history of the program. This column examines the NSA FTU data and NSA CC data at the four lowest points in claims history: 1967-1972, 1988, 2000-2005, and 2012-2018. The IUR during the 1960s was over 3%, as low as 2% during October of 1973, 1.5% during November of 1988, and 1.4% during October 2000. We are already at 1.0%. We have between two and seven more weeks of potential declines. Will the mainstream media cover this topic once during the next seven weeks?

The official number of unemployed  workers should drop during the next two job reports. We normally peak during January and bottom out during October. We have 6.27 million people who say that they are out of work and looking for work, according to the CPS survey data. This is the data with which the talking heads are comparing the JOLTS job opening data. Of course, they are comparing seasonally adjusted data with seasonally adjusted data. Ripe strawberries are better than green strawberries. Ripe apples are better than unripe apples. Their ripeness depends upon the time of the year.There were 7.4 million U-3 Unemployed workers during July 2017 and 6.2 million NSA U-3 workers during October of 2017. This July we had 6.7 million NSA U-3. If we drop by  1.2 million workers then we will hit 5.0 million NSA U-3 by this October. This would be fewer U-3 unemployed workers than October 2000, one of the touchstone years., when there were 5.153 million NSA U-3 workers.  We had 5.131 million NSA U-3 during October of 1974, and 3.83 million U-3 during October of 1973. It is almost a guarantee that we will not drop below 4 million claims this October.

Unemployment is falling and should continue to fall this Fall. We normally hit the annual low for U-3 unemployment during October. We normally see the lowest number of continuing unemployment claims during the first week of October. We can see continuing claims fall through November. First-time claims have been under 200,000 NSA FTU claims 15 times this year. This is more weeks under 200,000 than we saw during 1973 and closing in on the number of weeks under 200,000. We could, in theory, match the number of weeks under 200,000 recorded during 1967 as there were five weeks of claims during September and October of 1967 and there will be five weeks of claims data this September and October. Job Openings come from one data set, U-3 unemployment comes from a second data set, and the Weekly claims data comes from a third data set.It is not proper to compare three data sets with three different measures, especially the seasonally adjusted versions of the data, because each data set has its own seasonal factors and its own margin of error. 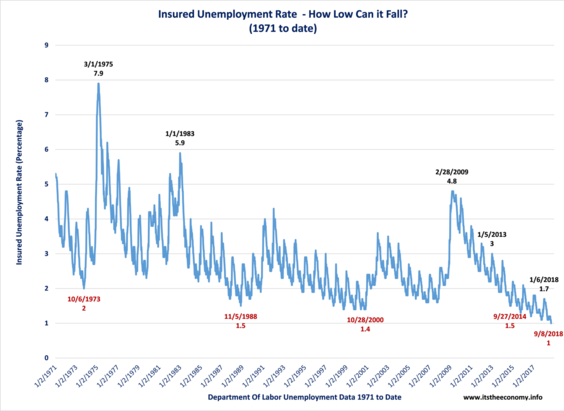 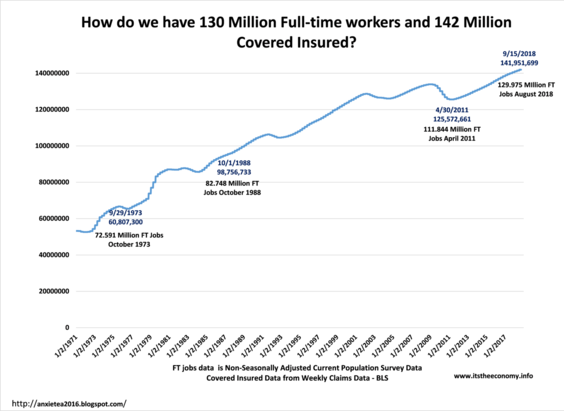 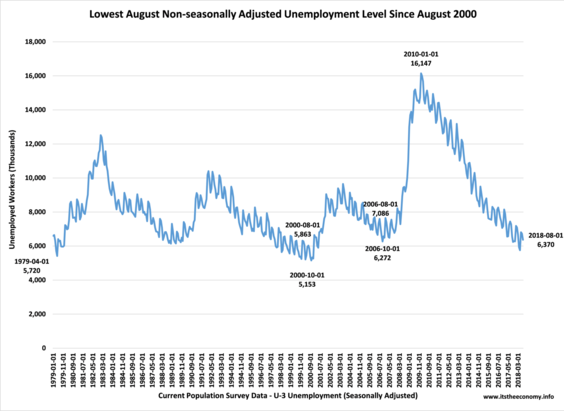