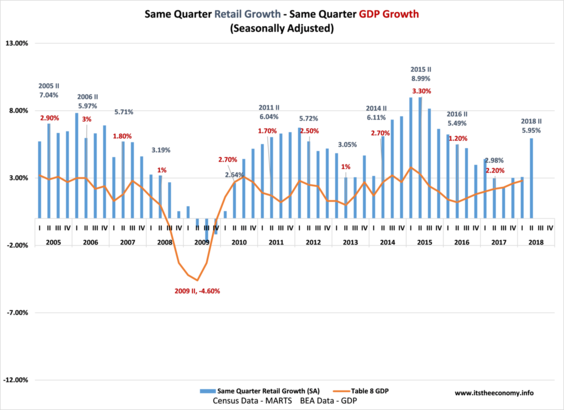 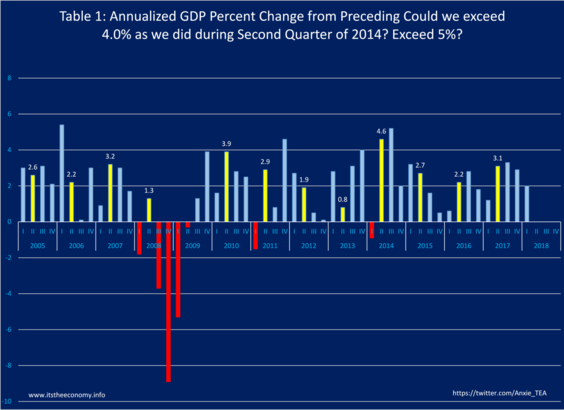 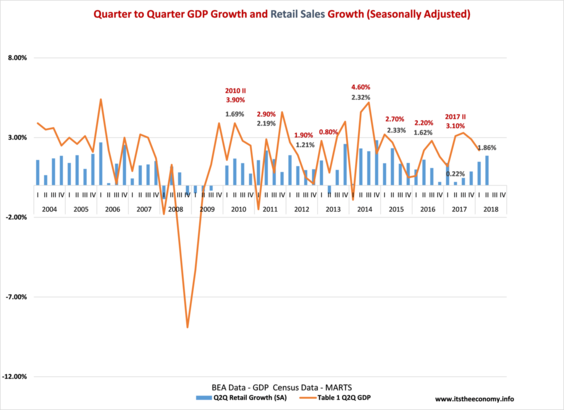 There are four main components to the Gross Domestic Product: Gross Private Domestic Investments (GPDI,) Personal Consumption Expenditures (PCE,) Imports/Exports, and Government Consumption Expenditures. This column has written an article pointing out that the growth ion retail sales, part of the PCE component, may have been undervalued. Will they be undervalued in the Second Quarter Advance GDP report? It depends how the data is recorded, non-seasonally adjusted, and how it is reported, seasonally adjusted.

The seasonally adjusted same quarter data spiked by 5.95% This makes sense when you compare the quarter to quarter growth rate of 2017Q2 and 2018Q2. We have recorded record levels of sales for the current month data each of the first six months of this year. This means that January was the best total sales month for the month of January ever. The same was true with the best February total sales, best March total sales, and the best April, May, and June total MARTS retail sales, non-seasonally adjusted.

Gross Private Domestic investment has been up during April and May. The Value in Place Construction data for April was up 7.6% April 2018 versus April 2017. The May to May change was up 4.3%. We do not have the June value at the time of this writing so it is not really possible to calculate the Quarter to Quarter data or the Same Quarter growth. We know that the new construction starts for residential sales is ahead of where we were during the first six months of 2017.

The Import - Export data is incomplete, too. The Census provides information on the import and export of goods and services. This is seasonally adjusted data. First quarter we had exports of $619  billion versus $576 billion 2017Q1. Imports were up from $711 billion to $774 billion. So far imports are up $38 billion 2017Q2 and exports are up $42 billion. Again, this is all seasonally adjusted data, and again we do not have the June data. This net improvement in Q2Q growth should be a positive, or less of a negative, than it was last year.

Expect good numbers. Expect revisions as the GPDI and import-export number data is released and revised.