The item that has been overlooked during the recent reports regarding the new home construction data and the new home sales data, other than they were delayed due to the Government Shutdown, is that loans are often required for construction to begin and for sales to commence. Loans go through Washington DC. This is the Spring Real Estate Season and the data may start showing lots of green as both flowers and sales start sprouting.

New Home Starts are expected to grow month to month and March to March, non-seasonally adjusted. Last year we saw just over 72,000 single family starts. This year we should see up to 80,000 starts, in part because last month was lower than expected, in part because most years prior to the recession we had over 80,000 units started.

The New Construction report for March will be released this Friday, Good Friday. It may be a great Friday. The thinking is that some new construction was held back by the Government Shutdown. Some builders may not have been able to secure financing prior to the shutdown. Some future home owners may not have been able to secure financing. Cold weather also gripped the nation this past Winter. There also may have been some hesitancy to jump into a new construction market as a result of the "End Time" prognosticators promoting the "inevitable recession." Some of these people where proclaiming that the stock markets would tank after the election of President Donald Trump.  We do not need that many more starts right now. We need some completions.

New Home Sales could be very good - and prices could stabilize. There has been a considerable amount of chatter that new home sales prices were surging too much. There was also some concern, especially in this column, that the lack of existing home inventory was not going to rebound "fast enough" and that new construction would have to build lower priced homes to meet the demand for "lower priced" homes.  Inventory, Units sold, and prices should improve this month.

The Average Sales Price should rebound form last March's $369,200. Has there been a little weakness in pricing as builders build to offset the lower price existing home "problem."Inventory has been sliding for existing homes since 2015. It takes time for builders to adjust to the changing market place. The average sales price could drop 1% month to month or even 2% March to March. If that happens then the average sales price could drop to a range of $361,000 to $375,000. The data indicates that $375,000 should be the low end of expectations an $387,000 should be the high end of expectations. It is possible, not probable, to hit $392,000 and set a new March Average Sales Price record.

New home sales are important for retail sales.  We will receive the monthly MARTS retail sales report for march tomorrow. If that data, especially Electronics and Appliances, Furniture and Furnishings sales, and Building Material and Garden Equipment sales are all expected to show improvement. New furniture, new appliance, and new garden items are often purchased around the time of a new home sale. Watch this data. We also need to see stability in full-time jobs for more than two years to grow the home buyer base. We had fewer full-time jobs during January 2017 than we had during July 2007. We had a record level of March full-time jobs workers during March 2017, March 2018, and March 2019. Expect to see some improvement in units sold and inventory.  The average sales price data will certainly garner the headlines depending upon what is recorded.

Existing Home sales have been Improving as Inventory has started to improve. You cannot sell imaginary existing home inventory. It is possible to generate listings off of cold calling and open houses. You cannot sell something unless it is for sale. The inventory of homes during December 2017 was the lowest going back to 1999.

The Average Sales price is expected to grow by over 3% this month, on an annualized basis. The Consumer Price Index (CPI) data has consistently reported shelter inflation over 3% per annum.  There is the outside chance that we could see 6% growth in the average sales price, partially because of the supply problem, and possibly because of the strong job market. The average sales price should come in between $298,000 and $302,000.

The same questions regarding the loan approval process looms over the head of existing home sales. Were sales slowed by the Mainstream Media Mania over a potential fifth rate hike, or a potential recession, or weak December Retail Sales or the Government Shutdown?  Was this a "kink in the hose" or was the water shut off entirely? Was the past few months of sales a drought or a dry spell? There are nearly ten time the number of existing homes sold as new home sold - this month it may be closer to a six to one ratio.  Will new home sales have a substitution effect on existing home sales? This existing home data will be released April 22nd, the day before the new home sales data. 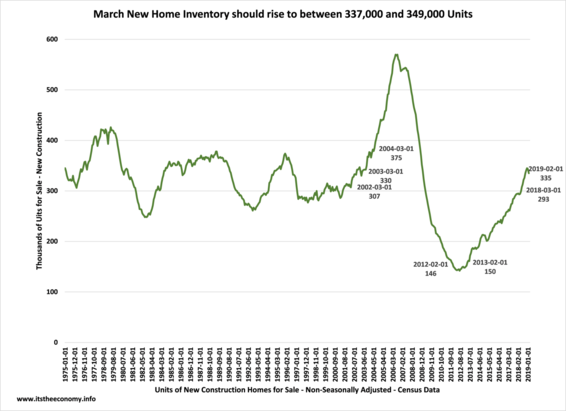 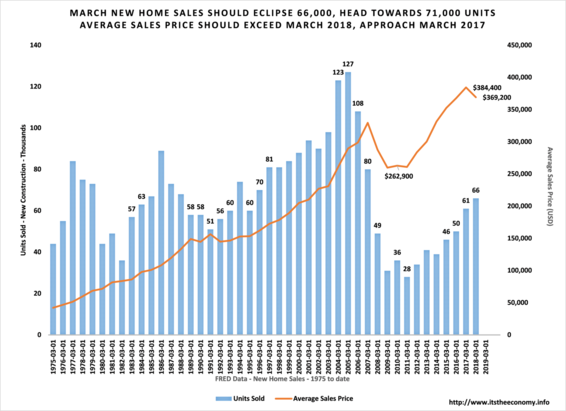 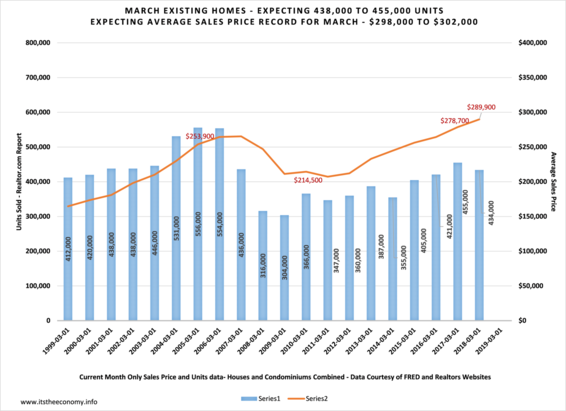 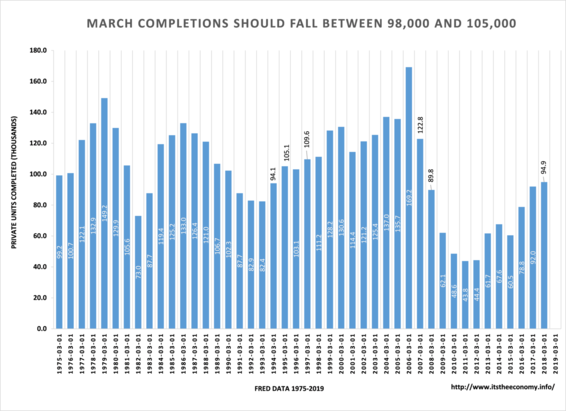 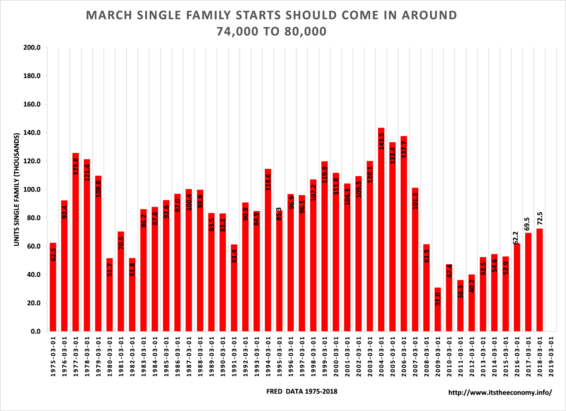 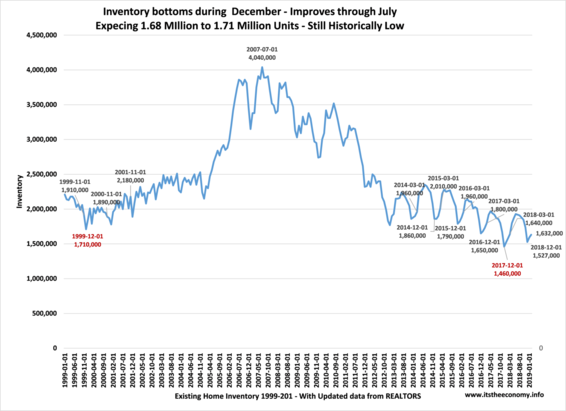