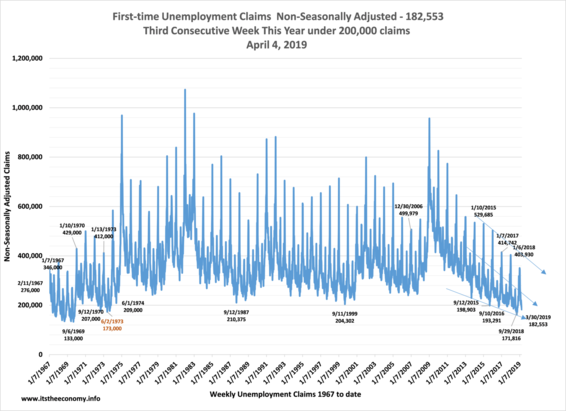 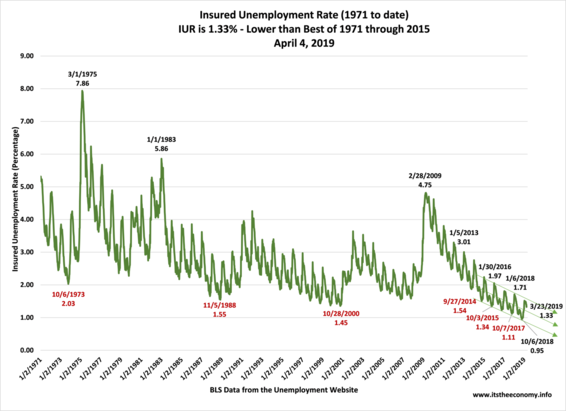 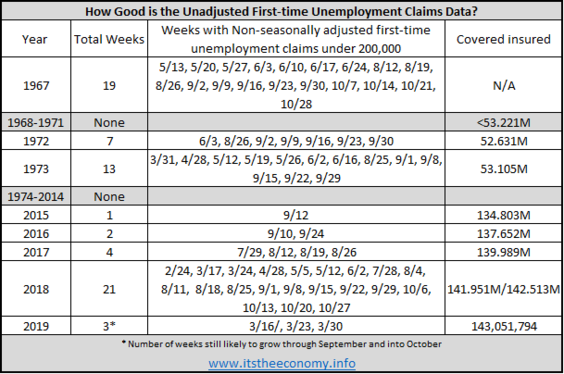 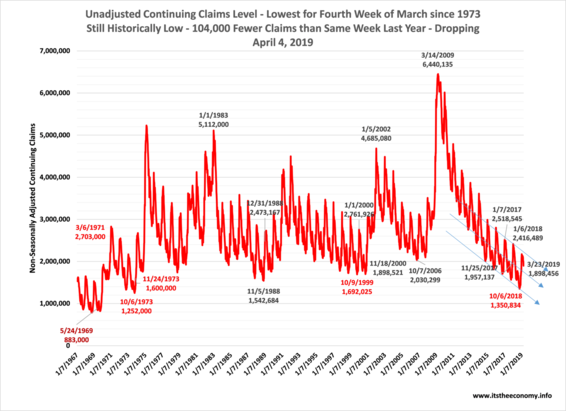 Last Week we had our second week this year with the non-seasonally adjusted first-time claims data under 200,000 claims. How did we do this week?

The weekly unemployment claims data used to be headline news when the seasonally adjusted first-time claims dropped below 400,000 and then 300,000. We had the seasonally adjusted (SA) first-time unemployment claims (FTU) data drop below 200,000 this year and not a peep about it. The four year anniversary of the SA FTU being under 300,000 claims. Nada. Other news that is important is the SA Continuing Claims (CC) data. We are approaching the two year anniversary of the SA CC value being below 2 million claims. Zip. Last year the insured unemployment rate broke below 1.00%. Absolutely nothing. What happened during the fifth week of March?

Non-Seasonally Adjusted First-time Claims dropped to 182,553. The headline number is the SA FTU number. The seasonal factors change week to week, month to month, season to season, and year to year. It is disingenuous to compare October data with January data, seasonally adjusted or not. This is the third consecutive week with the NSA FTU under 200,000 claims. It was thought that we would see a drop of 2% to 5% and that we would stay under 200,000 claims. Claims dropped by 3.96% we are nearly at last year's lowest level of NSA FTU. How low can we go?

The seasonally adjusted first-time unemployment claims "streak" continues. Readers of this column remember that the FTU Streak is anEconomic Urban Legend. It did not start when they media thinks that it started. The "streak" supposedly started March 7, 2015. The SA FTU came in at 202,000 claims. This is the lowest that the SA FTU has been during the final week of March 1969.

Non-seasonally adjusted Continuing Claims dropped below 2 million - hitting 1.898 million claims. We continue o be consistently lower than the same week data during 2018. If this continues we could have fewer than 1.25 million continuing claims during October this year. This would be the fewest NSA CC claims since October of 1973. How low can we go?

The Insured Unemployment Rate Fell to 1.33% - Better than 1967 through 2015. The Insured Unemployment Rate (IUR) is the percentage of the covered insured who are receiving continuing claims. This is different from the U-3 unemployment rate. The U-3 unemployment rate is from the Current population Survey (CPS) data and is the "household data" for workers who are not working who are looking for work. The IUR is the percentage of the workforce who had a job recently who are looking for work and who are eligible for benefits. Last year we were at 1.42% for the same week of the year. Last year we set a record low of 0.95% during October. How low can we go?

Tomorrow we receive the March Employment Situation Report. There will be some noise regarding the level of seasonally adjusted unemployed workers and the level of seasonally adjusted job openings. Next week we will receive the Jobs Openings and Labor Turnover Survey (JOLTS) data for February.  These two surveys measure different things with different collection sizes, with different margins of error, and different "granularity." The JOLTS data is closet to the Current Employment Statistics (CES) worker data than the Current Population Survey (CPS) which measures  jobs and unemployment data. The JOLTS data is being compared to the CPS data. This is not a good comparison at all. Watch the revisions to the CES worker data. Watch the CPS U-3 unemployment level and unemployment rate.  How low can the official unemployment level go?