How Low Do the Unemployment Claims Data Need to Fall to Get Headlines?

How Low Can the Unemployment Claims Data Fall before it HAS to Start Rising?

The first time claims data used to garner headlines as it fell below, and stayed below, 300,000 seasonally adjusted (SA) first-time (FTU) Claims. This year the SA FTU has twice fallen below 200,000 SA FTU. We have had seven weeks of NSA FTU claims under 200,000 claims. We have 2 million more covered insured this year than last year. How low will the SA FTU have to fall to garner headlines? How low will the NSA FTU, NSA continuing Claims (CC,) and the NSA Insured Unemployment rate fall before the growth in the workforce "forces" those numbers to rise?

The seasonally adjusted continuing claims data came in at 1.657 million claims. We have been under 2 million SA CC for longer than 2 years. The streak started April 1, 2017, which is 112 weeks ago.

The insured unemployment rate fell to 1.05%. This is lower than any recorded IUR from January 1967 through the majority of 2018. Last year we were at 1.11% during the third week of May. last year we dropped as low as 0.95% during October.

Continuing claims are different from the CPS U-3 unemployed worker level. There are many in the media that want to conflate the Current Population Survey (CPS) unemployment data with the JOLTS (Job Opening and Labor Turnover Survey ) Data for Job openings. The JOLTS data is comparable to, not identical to, the Current Employment Statistics (CES) data. Neither the CES data nor the CPS jobs and unemployment data are identical to the weekly claims data. This is like comparing and Apple to a pear to an orange to a pomegranate. All four are fruits. People who say they are out of work and looking for work are different from those who were working and who are now unemployed.  We could see a new low for May U-3 unemployed workers according to the CPS data or it could bounce higher even as continuing claims fall because people are looking for work.

The "law of large numbers" means that it is harder to go much lower than we already have fallen. If you compare the first-time claims and 143 million covered insured with last year's 141 million or 1973's 56 million covered insured and you see how difficult it is for these numbers to continue to fall. The same is true for the continuing claims data.  Last year we dropped to 1.35 million. Could we drop to 1.28 million this October? This would be close to the 1.252 million low of October 1973 this year. The IUR receives no attention, and the IUR may be the most accurate assessment of the unemployment situation. This data was huge this week. 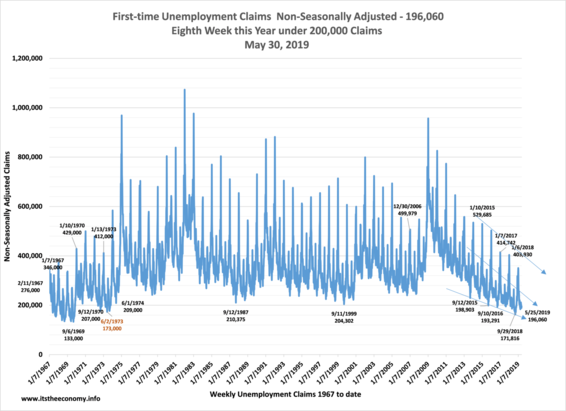 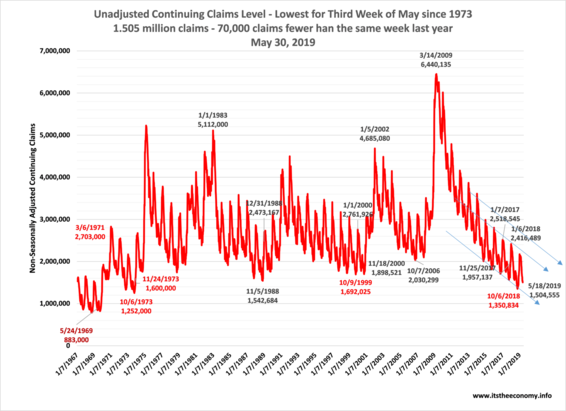 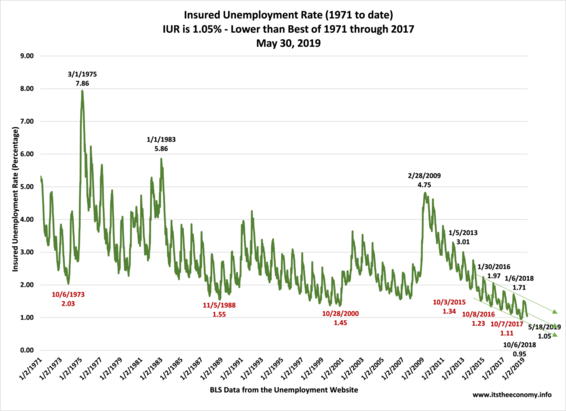