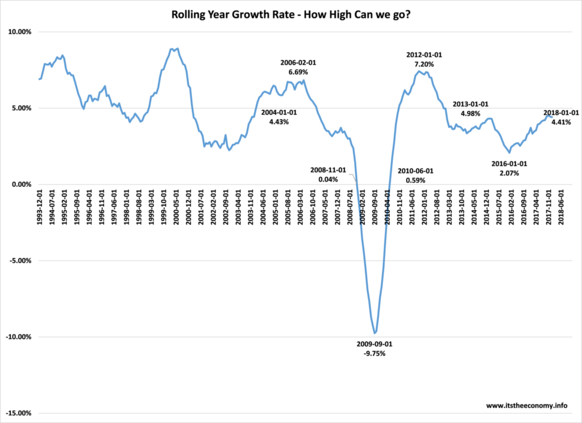 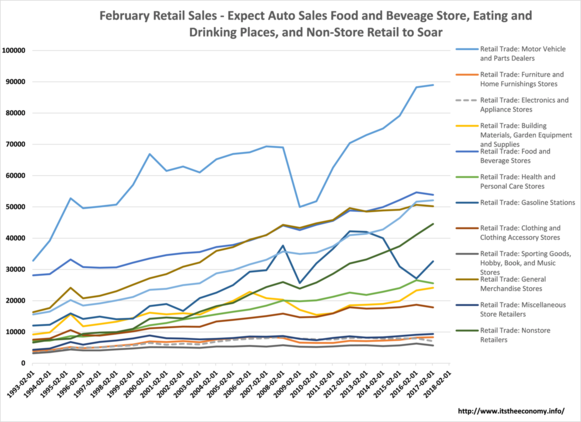 Will Retail Renaissance be a Masterpiece this month?

The United States is a Retail Economy. We make money, we spend it. Last year was the best retail sales year ever, We just had out Best January Retail month ever. There are some sectors that are not quite back to pre-recession levels, including the electronics and appliance sector and the gasoline sector.  There are four main sectors that have the pedal to the metal: Auto Sales, Food and Beverage Store, Eating and Drinking Establishments, and Non-Store Retail.  There are a number of ways to examine the data. Month to month changes are expected. Annual changes, same month, are expected. Total year to data sales, this month comprised of just January and February data. We can also examine the data from a rolling year perspective.

Expect Year over Year improvement in every sector except Electronics and Appliances. Electronics and appliance store sales have been on the decline for an extended period of time. It may be that we are purchasing these items on-line, also known as non-store retail. We saw annual sales grow at a meager 2.07% during January of 2016, when the January 2015 to January 2016 growth rate, for the month of January only, hit 0.93% Things changed last year. The annual growth rate, January Only, last month was over 5%. The entire year of 2017 grew at 4.41%. This points to a higher rolling year number this month.

Expect the non-seasonally adjusted data to show improvement in three sectors and a decline in at least one sector. Motor Vehicles, Clothing, and Miscellaneous Retail tend to grow during February. Non-store retail should also climb higher. November, December, and January are strong retail months. Some dip could be expected as people deal with those Christmas bills, the January returns and repurchases, and spending more money than they have on gift cards during January. The one "guaranteed" sector to drop month to month, non-seasonally adjusted, is the Sporting Good and Hobby Sector.

Could sales surge on a rolling year basis up over 5% or 6% this year? Full-time jobs free up money. We are in a surge of jobs, full-time jobs. We are coming off the best retail sales year ever. We are coming off the best February Total Retail sales month ever. The Retail Ice Age is over. The Retail Renaissance is well under way. Stay tuned for tomorrow's February Retail Report.