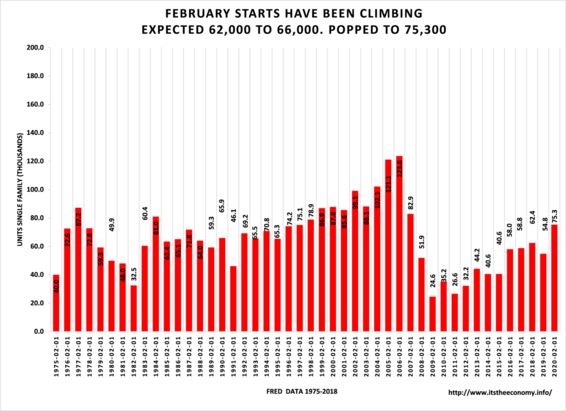 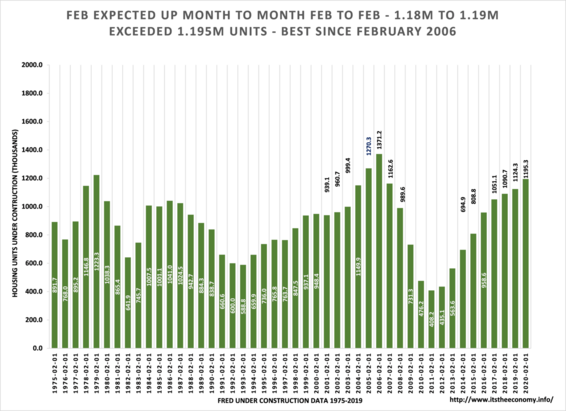 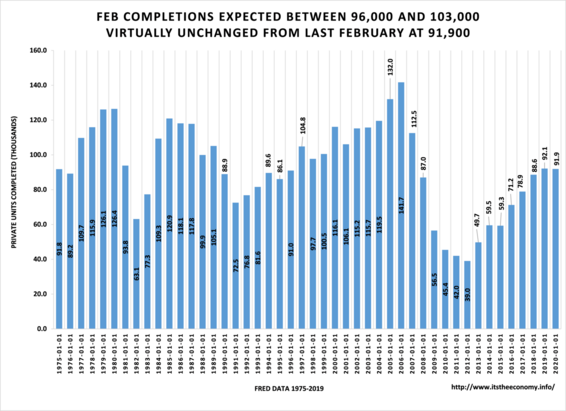 The Legacy Media is hyper-focused on the Wuhan Virus to the detriment of paying attention to the economic news that has been released recently. The Construction sector is mobilizing, as was referenced in the February Jobs Report and the December JOLTS Report. Unemployment claims are down, jobs and wages are up. Full-time jobs are rising. More people are qualifying for mortgages. The Wuhan Virus Mania started well into March. We should continue receiving solid data.It was expected that we could see strong data from the New Construction data, as well as the existing home sales data and the new home sales data.  What happened to the new construction data?

The New Home Starts Data was expected to grow from the January Level and the February 2019 level. The month to month data indicated 71k-78k starts. We had just over 62k starts February 2018. It was expected that, due to the fast start during January that the bounce may only be 62,000 to 66,000 units.

Units Under Construction jumped to 1.195 Million units. This is the highest level of February units since February 2006.This was a 6.32% jump from February last year and 1.31% from January. This topped the expectations.

All real estate is local.  Home prices vary on the sate, county, city, and subdivision in which you live. They vary based on square footage, amenities, and condition. Some are overpriced. Some are "under-priced." Some are priced just right. Some buyers are over-motivated and will pay a higher price for a home than someone else. Some sellers are "under-motivated" and will "wait for their" price, only to have to drop their price every month until a motivated buyer meets the very motivated seller. Contact you local REALTOR or some builders to find out what is available. Contact a lender to be pre-approved for a mortgage.

It's cold and flu season. It is also that time of year when new homes and for sale signs pop up  like daffodils. The Stock Market is not the Economy. We can expect stronger data for a while, possibly through March. It is possible that the virus will fade within a few weeks and allow April and May real estate activity to bllom, or it may be delayed as it was last year.