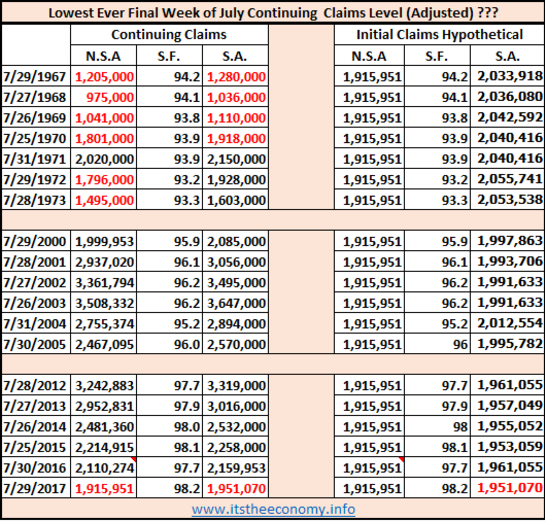 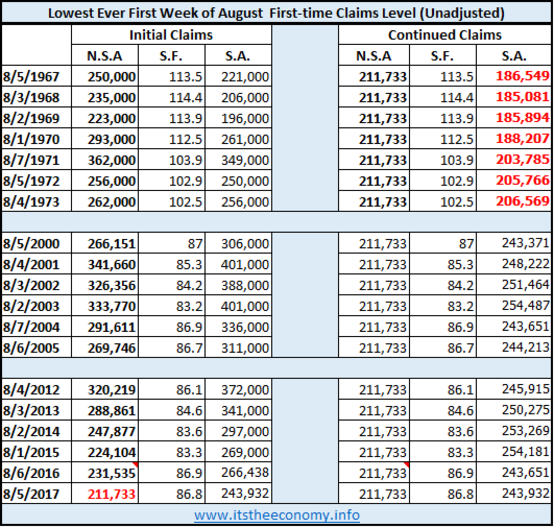 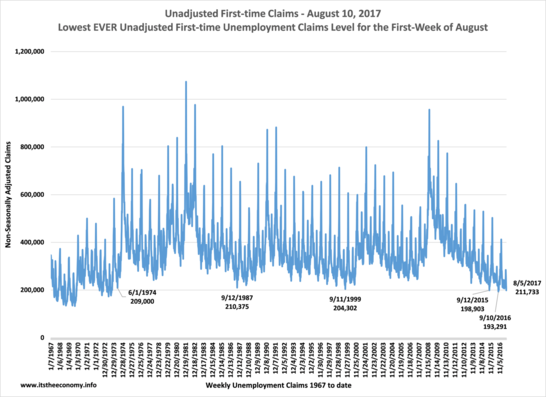 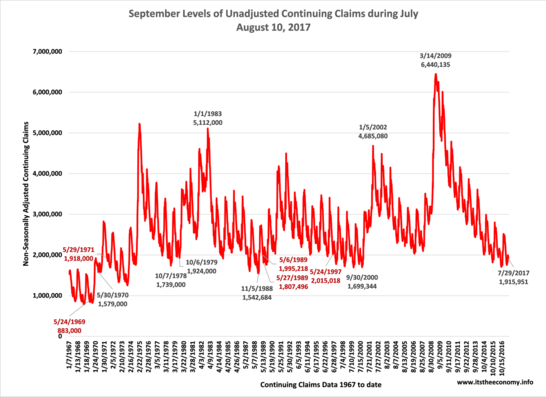 We Recorded the Fewest First-Time Unemployment Claims for the First Week of August Ever. Last week we had the lowest ever level of unadjusted first-time claims for the final week of July. Last Call September we dropped below 200,000 NSA FTU claims, the second time during over 44 years - nobody mentioned it. It was alarming. We did the same thing during the Fall of 2015. Crickets. WE had only gotten close to 200,000 NSA FTU claims during the 41 years prior to that September 2015 level.

What Would The Headlines Read if they Reported First-time Claims Under 200,000? The "Benchmark" used to be 300,000 seasonally adjusted claims. We have been under 250,000 SA FTU claims and people ignore it. Is it because we have a low participation rate so people feel that the weekly claims data is "fake news?" Is it because nobody believed President Obama's Under 300k Streak? The streak that ended last November. The Streak that never really ever got started? The Streak that ended multiple times throughout 2015. The streak that is 50 weeks shorter than they think it is.  We had roughly 53,000,000 eligible insured during 1971 - they don't even report it the covered insured levels for 1967-1971. This week we have roughly 140,000,000 people who are "covered." This is so remarkable that I cannot put it into words without pounding the keys of my laptop in hopes that they can be heard everywhere.

Unadjusted Continuing Claims Remain below 2 Million -  When will they start reporting this information? We had nearly 6.5 million people on continuing benefits at the worst of the recession. The numbers were the highest ever at this time because the federal government extended benefits for the long-term unemployed. The Continuing Claims level tends to bottom during the first week of October, so it will be a few months until we see if we will drop below the 1.5 million level.

Possibly the Lowest Ever Final Week of July Continuing Claims Level ever Reported. If the same technique is used to compare the NSA and hypothetical SA  FTU data is applied to the continuing claims data we can see that the NSA data is near historic lows for this time of year and the SA data is probably at the lowest for this time of year. Will we drop to 1.7 Million? Will we drop to 1.5 million?

We are seeing "Fall levels" of unemployment data during the Summer. WE should continue to see the NSA FTU data and the NSA CC data decline. Could the NSA FTU value drop below 150,000 claims, to where it was during the 1960s? Could continuing claims level drop to 15 million or even close to 1.0 million as it was during the 1960s? We will know in short order.  The problem is that the media is obsessed with the seasonally adjusted data. They do not think that most people will understand that employment spikes during the Summer and during the run up to Christmas, and that it is normal for unemployment to spike after the first of the year. The data indicates that we are seeing the most workers added to the economy during the first year of a President since President Reagan, non-seasonally adjusted. We also have a record level of people working two part-time jobs, at this time. All of this means that we have to pay attention to the data recorded as well as the data that is reported.