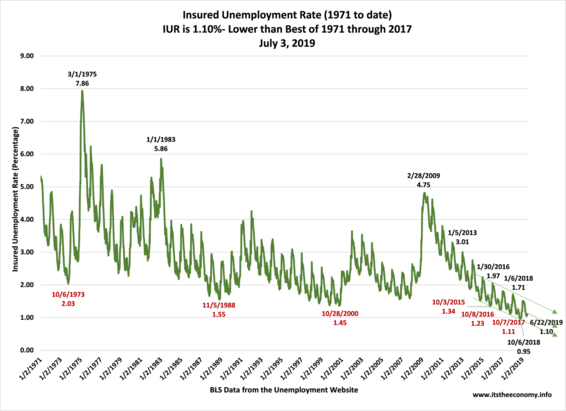 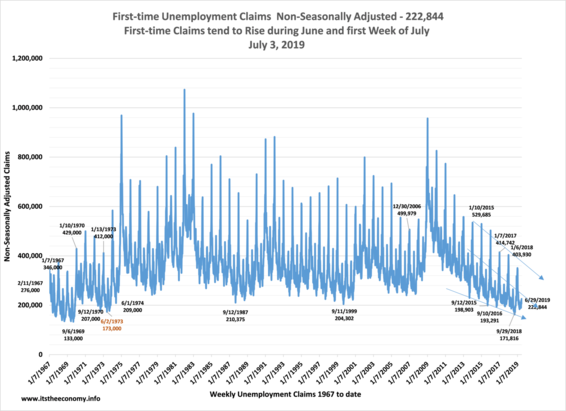 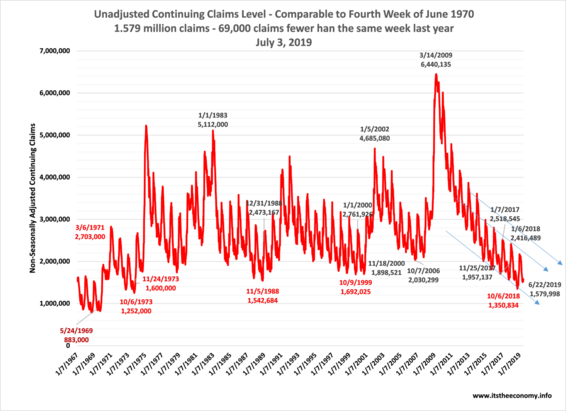 There are two peaks to the unemployment claims data, the January Peak and the July Peak. The highest peak of the year normally happens the first week of January for non-seasonally adjusted (SA)  first-time unemployment (FTU) claims and during the second week of January for NSA Continuing Claims (CC.) a secondary peak happens the first week of July for FTU and the Second week of July for CC. This year the data is a little more interesting with a fifth Saturday during the month of June. It was also interesting because the data was released on Wednesday instead of Thursday due to Independence Day falling on Thursday.

The Non-seasonally adjusted first time claims number dropped slightly to  222,844. This is lower than last year during the same time of year and 3,000 claims lower than last week. The data indicated  that the NSA FTU could fall to the 221,000 to 224,000 range.

The non-seasonally adjusted continuing claims number rose slightly from 1.558 million to 1.579 million claims. This was anticipated. The data indicated that the continuing claims could rise or fall by roughly 1.00%. Claims rouse by 1.37%. This is still 69,000 claims fewer than the same week last year. It was also almost identical to the 1.579 million claims that we had during the week of June 27, 1970. Again, we had 90 million fewer covered insured during that week of the year. The data is unavailable for 1970.

The Unemployment data came in as was expected. Continuing claims may hit the lowest level recorded since October of 1973 when we reach the first week of October this year. We may even set a record for the number of weeks during a year with the non-seasonally adjusted first-time claims under 200,000 this year. We are ahead of where we were as year at this time. The insured unemployment rate may fall below 0.90%  Sooner or later someone n the media will catch on and report this (Ahem.)