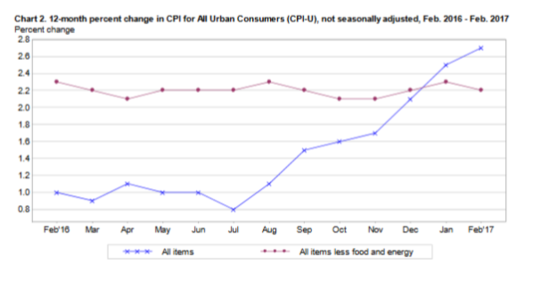 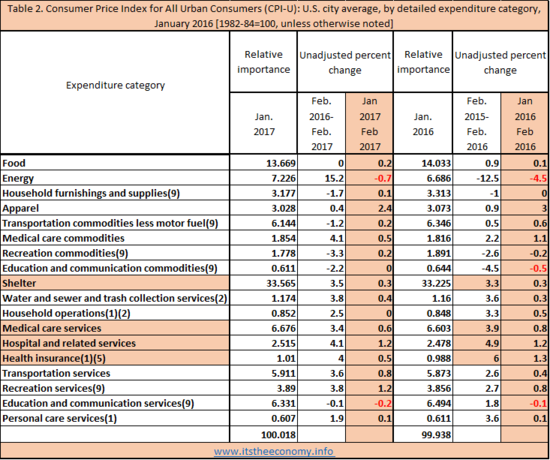 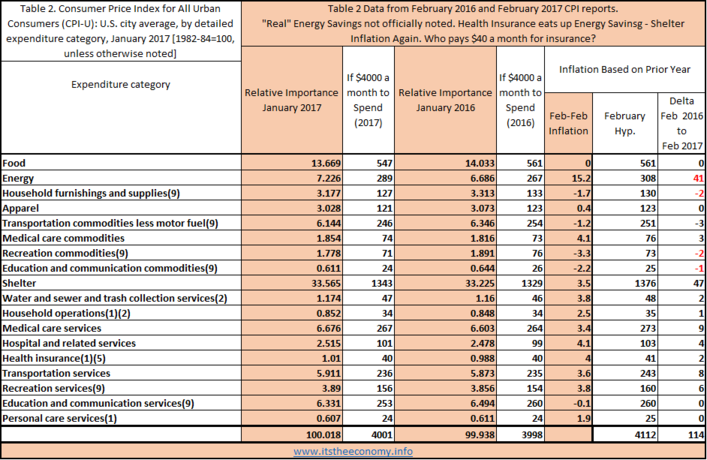 If you feel that your money isn't going as far as it used to go you are perceiving reality pretty accurately. We had "no inflation" this past July. Now, the twelve month rate of inflation for all items, because we have to by all items, we cannot stop buying food and energy products during the Winter, is almost off the chart provided in the Consumer Price Index Report for February 2017. Will we see a 3.0% value next month? WE know that gasoline prices are increasing. We know medical insurance costs are increasing. We also have seen persistent and consistent shelter inflation. What is the "real" story.

We have seen a spike in Energy Prices of 15.2% since February 2016. Last year at this time this column was commenting on the "Gasoline Stimulus" that was being touted. Last February the graph was range-bound between -0.2% and 0.3%.  Last February the Table one inflation rate for all items was 1.0%..

We have had Back to Back years of Medical Insurance Inflation over 4% - This year it is 6.0%. This is very important with regard to the discussion of the Affordable Care Act and the Republican ACHA replacement plan. WE were supposed to be saving money by this point in time. Medical Care services are up another 3.4% over last year's level which was 3.9% higher than February 2015.  Hospital and related services are up 4.1% on top of last February's increase of 4.9%.

Shelter Costs surged another 3.5% - more than last February's increase. This is a constant and consistent increase in shelter costs. We see increase in the average sales price of new and existing homes. We are seeing increases in rent. Right now the authors seem to think that we have 100.018% of our income  to spend this February while we only spent 99.938% last year.