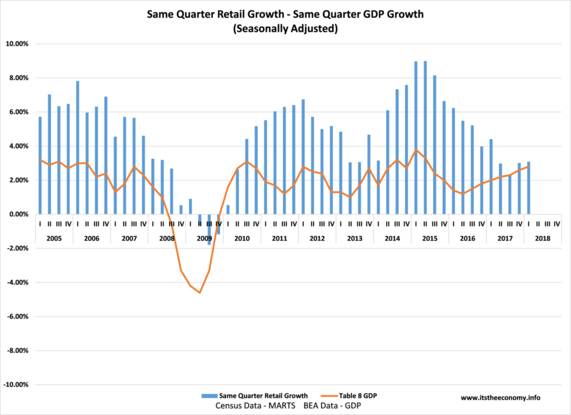 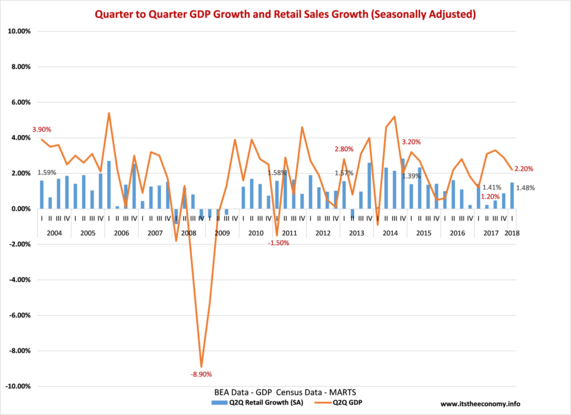 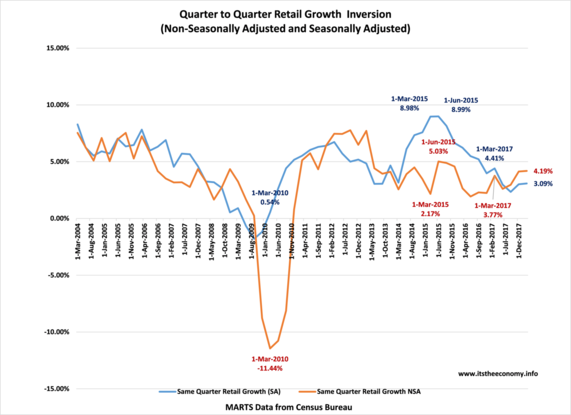 This column has written numerous articles regarding both the Gross Domestic Product and the MARTS Retail Report. There is a meme that we are in a Retail Ice Age. The truth is that we are in a Retail Renaissance. The retail data for the first four months of the year revealed the strongest retail market ever, through the first four months of any year. The "preliminary: GDP report for the first quarter of 2018 indicated that there was only a 1% growth in retail sales (Personal Consumption Expenditures) during the first quarter. Inflation was reported at 2.5% during April, It was reported at 2.4% during March, That March CPI-U report indicated that inflation was 2.2% during February and 2.1% during January. How can the First Quarter PCE value be 1% if every month of the quarter had inflation over 2%? Last night I sent out a tweet asking if  the GDP number was being undervalued. The 1.0% PCE number was making it difficult for me to sleep. Let's look at some data and start some discussions.

The Headline GDP Number is Seasonally Adjusted Quarter to quarter growth. There are main four components to the GDP: Personal Consumption Expenditures, Gross Private Domestic Investments, Government Consumption Expenditures, and Imports/Exports. Government spending had been a negative contributor to GDP. The "common belief" is that retail sales contribute 60-70% to the GDP. We "know" that we have a trade imbalance that "deflated" the Import/Export component of GDP.  The majority of the economic data that is published have seasonally adjusted (SA) and non-seasonally adjusted (NSA) data sets. GDP does not have a NSA component published. GDP has two forms, the quarter to quarter, or "Table 1," growth rate and the "Same Quarter," Table 8, Annual Growth rate, or same quarter growth rate. Seasonally adjusted data is dubious because the seasonal factors used to convert NSA data to SA data change by data set, category, month, quarter, and year.

Quarter to Quarter Growth Paints One Picture. If you look at the first image you can see that there was a spike in Q2Q SA retail growth between 2016Q4 and 2017Q1. You can then see that SA Q2Q retail has risen each quarter since that time.  Meanwhile, the "Annualized" Table 1 GDP growth spiked during 2017Q2, Rose further during 2017Q3, eased a little during the fourth quarter, while remaining over 3%, and then dropping under 3% during the first quarter of this year. If the retail sales component accurately  reflects the PCE component of GDP then the PCE component should be rising, not falling.

Same Quarter Growth Paints a Different Picture. Why is seasonally adjusted quarterly sales, same quarter sales, declining since 2016Q2 while the annualized GDP has risen every quarter since 2016Q2? There is a drop in the same quarter Retail Sales levels that started during the second quarter of 2015. We know that the CPI-U index recorded ten consecutive months of deflation during 2015. This may explain some of the drop in Retail Growth. we see that there was improvement in the Same Quarter retail sales during 2017Q4 and 2018Q1. The Same quarter values are seriously lagging economic indicators.  Can the Table 8 GDP exceed the levels that we saw during 2015Q1(3.8%) or 2005Q1 (3.2%) some time this year? It's possible. The Q1 annualized GDP value has been rising since 2016Q1. The same can be said true about the Table 8 same quarter GDP growth.

Non-Seasonally Adjusted Retail Sales versus Seasonally Adjusted Retail Sales Paints a Third Picture. This is where the data get very interesting. Most times when seasonally adjusted data is compared with non-seasonally adjusted data the SA data "smooths out the data."  Peaks are not as high and valleys are not as low as with the NSA data. The NSA quarterly MARTS retail data was basically on a steady decline for growth after 2012.  The sales volume was still growing. The growth was slowing.The SA quarterly MARTS data. "Somehow" the SA MARTS data was growing at 8.98% during March of 2015 when the NSA data was only growing at 2.17%. The March 2017 SA data was growing at 4.41%, a drop, while the NSA data was growing at 3.77%, an improvement. Now, the March 2018 SA MARTS quarterly data had slowed to 3.09% while the NSA growth rate has improved to 4.19%. Why are the quarterly lines inverting? Why was the SA MARTS growth rate "inflated?"

This isn't the first time that there has been an inversion of the NSA and SA Retail Growth Rates, There was an inversion during the Spring of 2013, the Fall of 2011, and the Fall of 2009. The quarter to quarter growth is indicating steadily increasing seasonally adjusted quarter to quarter retail growth. The Same quarter GDP data is revealing a similar pattern. We are not in a Retail Ice age. We are in a Retail Renaissance.  First quarter GDP appears to have undervalued seriously good retail data as a result of seasonal adjustments to the data.