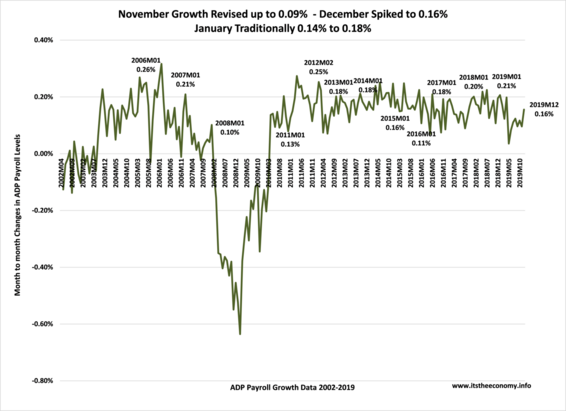 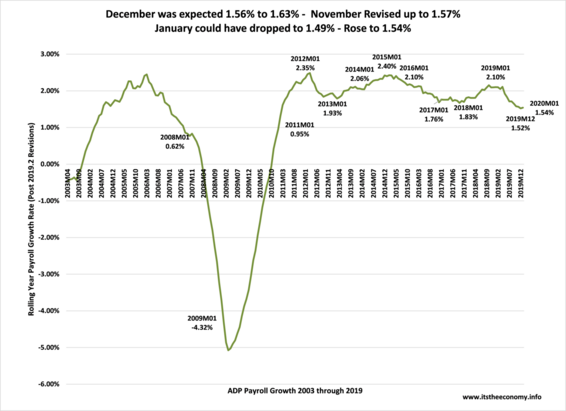 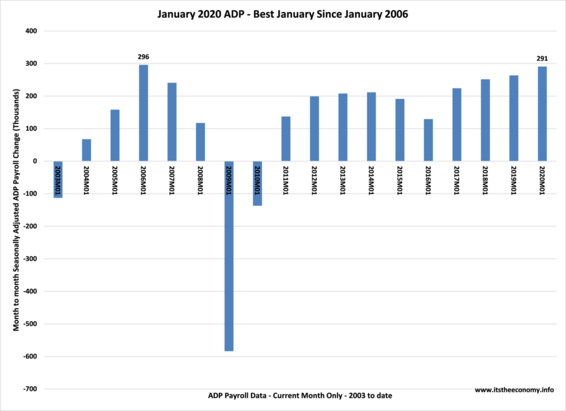 The ADP Payroll report on Private Payroll creation and losses is released the Wednesday prior to the monthly government Employment Situation Report, or jobs report. Normally the January Jobs Report comes out with a revision to the prior year's data which means that the ADP report posts its revisions with the release of their February Jobs Report. We already know that the government numbers are expected to be revised lower from their latest values. Will ADP make their revisions this month or next month? Either way, we only have the seasonally adjusted ADP data to compute possible month to month and January to January changes. The January ADP report can be found here.

The Month to Month data was expected to grow by 0.14% to 0.18%. There were five sectors that were expected to experience the largest growth: Construction, Natural Resources (M/L,) Leisure and Hospitality (LAH,) Education and Health Services (EHS,) and Profession Business Services (PBS.) The only sector that was expected to trim seasonally adjusted payrolls is Trade, Transportation, and Utilities (TTU,) as Santa's delivery crew takes a well deserved vacation.Last January the Advance ADP number was 213,000, it was revised to 300,000 positions with the release of the February Advance ADP report, and January was revised again with the release of the March Advance Report, ending at 264,000 payroll positions created.

The Month to month data grew by 291,000 payroll positions, or 0.16%. All sectors added to their payrolls except Mining and Logging (Natural Resources.) The largest growth was reported in Construction, Leisure and Hospitality, Education and Health Services, Professional Business Services, and Other Services.

The January to January data grew by 1.54%, better than expected.We saw a decrease in M/L payroll, as was anticipated. The sectors with the largest growth were EHS, Construction, LAH, PBS and other services.

What happened to the monthly revisions?  The November ADP number was 129.561 million positions. The December number was 129.763 million positions. November was revised down to 129.558 million, or three thousand jobs. December was revised down to 129.758 million or five thousand jobs. This means that the net job gain was really 286,000 from last month's level. Only 286,000. This was the best January since January 2006, according to the ADP data.

Expect some revisions to occur. Expect the month to month CES Employment Statistics data and the  January ADP growth to be very different.